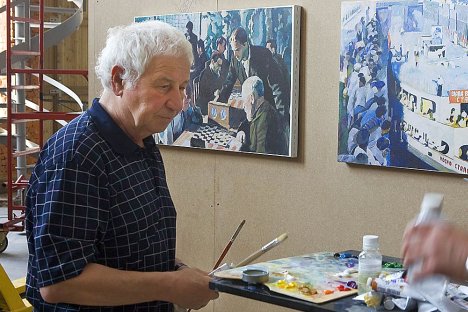 In a Soviet flat, Ilya Kabakov explored escape and utopia. His career has soared in his post-Soviet partnership with Emilia Kabakov.

In “The Man Who Flew into Space from His Apartment,” an installation from the 1980s, Russian artist Ilya Kabakov created an environment intimate and full of longing. In the work, a plank straddled two simple wooden chairs below a trampoline harness; above the harness something has blown out the ceiling, and the viewer has missed the event.

Thoughts outside the frame

Many view Ilya Kabakov as the most important Russian artist to have emerged from the latter half of the 20th century. For the past two decades he has been working together with his partner Emilia Kabakov, yet many American collectors don't really know who they are. Edelman Arts in New York will exhibit more than 30 of his drawing from 1960-1985. Kabakov created a fable called "10 Characters," which ironically offers ten ways to react to the world. Included in the show are "Sitting-in-the-Closet-Primakov"; "The Decorator Malygin" and "The Flying Komarov." These poetic, poignant drawings reflect Kabakov's earliest meditations on flight and escape when he did not show his work in the Soviet Union. "The Study of Kabakov" opens Oct. 18 and runs until Dec. 23 at Edelman Arts, 136 E 74th St. New York, N.Y. 10021.

The walls of the apartment are covered in so many colorful Soviet-era posters that it has the appearance of an archaeological site. The work is ironic but also exists in a universe where magical realism—a man rocketing out of a harsh reality, Soviet or otherwise—seems plausible. Ilya Kabakov is a master of the art-installation. He could tell a story with some paints (he was a children’s book illustrator) and broken furniture (he became a conceptualist) long before he broke the million-dollar mark. Since 1989, he has been working with his artistic partner, Emilia Kabakov, who became his wife in 1992. Both were born in Dnepropetrovsk, in the Soviet Union, now Ukraine. Ilya was born in 1933, and will celebrate his 80th birthday in 2013. Emilia was born in 1945. Known as “The Kabakovs,” they are a force field on the international arts scene, traveling and showing their installations all over the world. “Ilya Kabakov attracted the attention of the Western art world, inspiring collectors and scholars to learn about the entire world of Soviet/Russian art,” said Natalia Kolodzei, a prominent collector of all the Russian Noncomformists, including Kabakov. Kolodzei also runs a non-profit arts foundation with her mother, who befriended Russian artists when they were poor, underground and tightly knit as a group, like a family living in a prison. When many left Russia and went into exile in the 1980s, the atmosphere changed, and they became more dispersed. Currently, HEMPHILL, a Washington, D.C., gallery, is the host of “KABAKOV: Ilya and Emilia Kabakov,” through October. The exhibit features scale models of their larger work, including “Ship of Tolerance,” a project that includes building a ship; meeting with children in a workshop setting to discuss the concept of tolerance; then launching the ship with children’s drawings as the mast. The exhibit offers a scale model of the ship made of bamboo ($150,000) and a silkscreen on canvas of a mast ($60,000). The ship has already been created in a few harbors, including Siwa, Egypt, and Miami, Florida. “The goal, of course, is making connections to different cultures,” Ilya said. The ship is a “romantic” medium traveling across boundaries, he said. The D.C. show opened on the eve of the 10th anniversary of Sept. 11, in the midst of a solemn nationwide mourning. Was the timing of their exhibit a coincidence? “Nothing in this life is coincidence,” said Emilia. George Hemphill, the owner of the gallery, said there is a social relevance to showing the Kabakovs’ work now. “This is not a time of tolerance here on Capitol Hill,” he said. Also on view at the show is a scale model and drawings for “The Large House of Humanity,” a 1998 project for D.C. that was never realized, perhaps in part because it was to be higher than the Washington Monument. The D.C. show is just one of more than a dozen exhibits, installations and projects slated for this year. The Kabakovs, with their children and grandchildren, claim to be slowing down, since he is almost an octogenarian, but it’s hard to see. They are passionate about their legacy projects, like the educational component of the “Ship of Tolerance,” where they go to schools and sometimes offer children their first class in drawing. The Kabakovs live on Long Island and say they consider themselves American artists, and their Soviet preoccupations have become more universal. But to the world, they are Russian, from their explorations of utopia and use of fantasy and science to the way they make poetry out of the banal. (Check out the meditation called “Toilets.”) It all identifies them as Russian to the art world. They have been asked by Russia to come to Moscow for Ilya’s 80th birthday. “We would like to celebrate in America,” Emilia said, “because we are American artists.”