Building the engine of progress from the idea up 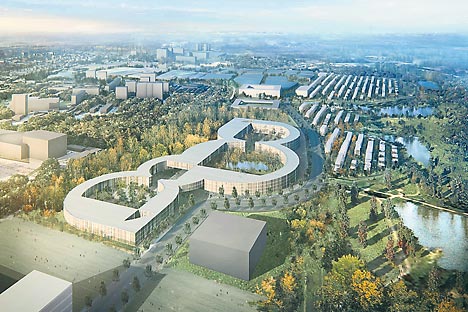 An architect’s rendering of the innovation city of Skolkovo. In addition to research facilities, the campus will include housing for scientists. Source: Press Photo

The innovation city being built in Skolkovo is still a work in progress, but the place is already making its mark on Russia’s consciousness.

The founders of the Skolkovo city of innovation hope it will become not only the engine of the Russian economy, but a major player in global research and development as well. They have their work cut out for them: At the moment, Skolkovo exists more as a concept than as a reality. But nevertheless, the place is making its mark in Russia’s consciousness. Skolkovo as a brand is already widely known, and more words with the prefix “nano” are popping up in everyday language, along with “innovation” and “modernization.” Skolkovo has also revived an older Russian acronym: Niokr, basically the Russian equivalent of R&D.

It refers to a full-cycle research center where scientists come up with new technology, build a pilot product, test it and, if the test is successful, launch it into mass production. In the United States, $382.6 billion or 2.7 percent of G.D.P. is spent each year on research and development. In contrast, Russian firms spend just a little over $23 billion, or 1 percent of G.D.P.

Skolkovo wants to change that.

“Our main task now is to create the most comfortable conditions and environment,” said Roman Romanovsky, Skolkovo’s operating director for key partners. “Innovation centers are usually thought to be exclusively aimed at start-ups, but that’s not the case. Nor are we committed only to corporate research. We seek to make the circulation of ideas at Skolkovo constant, so that everyone can find what they came here for. Major companies would get young talent, start-ups would meet investors and investors would get promising new ideas, and so on.”

2.7% of G.D.P. is what American companies spend each year on research and development. Russian companies spend 1 percent of G.D.P. 150 is the number of employees Siemens hopes to have working in its research center at Skolkovo by 2015. $30 million is the amount the Skolkovo Foundation is contributing to Siemens’ Skolkovo project.

The approach has proven to be popular with foreign companies, many of which have already expressed a desire to open research centers at Skolkovo. Most companies have just given verbal assurances of participation, but some concrete agreements have already been signed.

German electronics giant Siemens has signed a document providing for the phased development of its operations in Skolkovo. By 2015, it hopes to have a staff of 150 at the center. The total sum of joint investments will be about $80 million, with $50 million to be put up by Siemens and $30 million by Skolkovo Foundation grants.

“For us, [Skolkovo] is interesting as a pilot project that will transform Russia’s future,” said Alexander Averyanov, head of the Siemens project at Skolkovo. “It’s no coincidence that Siemens C.E.O Peter Löscher is a member of the Skolkovo Foundation Board. We are also cooperating with the foundation to promote the Skolkovo brand around the world, and are dealing with the infrastructure issues.” Siemens has not disclosed details of its project, but some statements indicate that is likely to be related to radioisotope diagnosis. The first grant of more than $4 million has already been issued for the research project.

Nokia, Finland’s mobile phone powerhouse, has a somewhat different vision of its partnership with the foundation, with a focus on inventing and introducing inline production of everyday devices.

“[Skolkovo Foundation President Viktor] Vekselberg and I signed an agreement confirming the specific stages of the center’s development,” said Nokia representative Tatiana Oberemova. “The center will develop powerful mobile computing systems and offer solutions in the field of nanotechnology. Nokia’s investments in the center amount to a double-digit number in the millions of euros, which is the standard budget for Nokia’s R&D centers.”

The Nokia project developed at a dizzying pace: The construction contract was signed in June and a handset research facility was opened in November. Eventually, the company hopes to not only construct laboratories but also develop large-scale commercialization projects involving mass production of electronic devices using nanotechnology.

Nokia competitor Ericsson sees Skolkovo as an excellent platform for research in the sphere of telecommunications, cloud and telematics technologies. Its first research effort will be smart power-supply networks whose main goal is to save energy. These smart meters installed into phones will allow end users to provide up-to-the-minute information to distribution companies, allowing both the company and the consumer to monitor consumption patterns more closely. Ericsson Vice President for Work with Government Agencies Mikhail Podoprygalov said: “There used to be a lot of talk about the need to develop our economy, noncommodity exports — and now we have a place, an ecosystem where this can be accomplished. Skolkovo provides an ecosystem, and that’s an important cornerstone,” said Podoprygalov. “Some things could have been done better and differently, but given the ambitious task Skolkovo is tackling and its vast range of goals, it is hard to say what’s justified and what isn’t.”

Crazy enough to change the culture

Timofei Shatskikh, a financial analyst with RosBusinessConsulting, said that showing that Skolkovo is not just talk, but action is crucial to its success: “This is really Skolkovo’s main problem. Until the first project is implemented, in the minds of most Russians, not to mention domestic investors, it will remain just another ambitious government idea. People don’t see Skolkovo as a scientific institution, but rather as a political one aimed at projecting a positive image. Even the foundation’s established partnerships with Western companies cannot dissuade them of this. Until the first scientific idea that germinated within the walls of Skolkovo is presented, that opinion won’t change. But the creation of several R&D centers may rectify the situation. Then you can at least argue that the generation of new ideas will happen serially.”