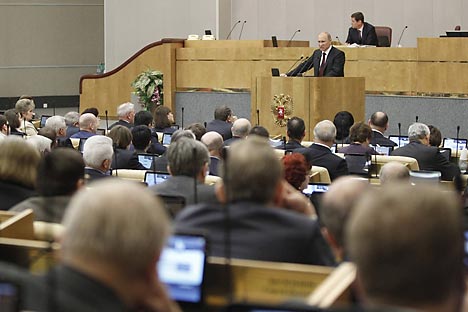 Vladimir Putin says he is ready to discuss a constitutional two-presidential-term limit though it would not rule out the chance for him to remain Russian President till 2024.

Answering MPs question, President-elect Putin said it would be “reasonable” to consider removing the word “running” from Article 81 of the Russian Constitution. It now reads: “One and the same person may not be elected President of the Russian Federation for more than two terms running.” The PM has already served two four-year terms in 2000-2008 and has been elected again this year for six years.

Once again, the question: “Who is Mr. Putin?”

“We should all discuss [amendments to the law]…I’m being absolutely sincere and not only because it doesn’t relate to me. We all understand what we are talking about, we are adults,” he said.

Jokingly, he pointed out that “the law has no retrospective effect” and if it is passed “I’ll have an opportunity to work for another two terms, no problems about that.” On a more serious note, Putin assured that he has reached a period of his life when there is no need to grasp power.

“I agree that it is always necessary to think about improving our political system so that it would become more stable, reliable, efficient and flexible when it comes to reacting to processes happening both within and around the country,” he said. “Let’s think about it together. In fact, it’s a super-task for me, the ultimate priority of my work and, perhaps, my life.”

On Wednesday, Putin presented his report on 2011 government work to the lower house, the State Duma, and outlined future priorities.

Addressing the lawmakers, Putin vowed to publish “road maps” for all his election campaign initiatives in the very first decree when he returns to the Kremlin. Demographics, the development of Russia’s Eastern territories, building a new economy and strengthening Russia’s global position – were named as key directions to work on.

Putin also listed renewing law enforcement agencies, eliminating corruption, strengthening judicial authority and developing parliamentary investigation. “Undoubtedly, these are our key tasks, which should become common both for the leadership and the opposition,” he told the Duma.

The President-elect also talked-over the recently adopted law that significantly simplifies the registration procedure for political parties. He said that authorities should make sure it does not lead to the creation of nationalist and separatist movements, but society’s demands should not be ignored.

“Society should feel that it forms the government. Only in that case it would be stable and there would be a balance of political forces,” he said.

Summing up the results of the government work during the last four years, the PM pointed out that the Cabinet has fulfilled all its obligations despite the global economic crisis. He said the Russian leadership could have used the economic difficulties as an excuse to do nothing, “like other countries did.” But it would have been wrong, from political, social and economic points of view, he stressed.

The world economic recession has become a huge challenge, and if Russia did not respond to it appropriately “the economy and social sphere would have collapsed and the country’s sovereignty and geopolitical independence would have been in question”. In that case, Russia would have to “bury” the ideas of development and modernization.

“But we didn’t give in. We have proved ourselves to be a mature, creative and self-confident nation with a huge inner life force,” Putin said.

The key achievement, he believes, is that Russia managed to stabilize and increase the population, which has reached over 143 million in 2011. “We didn’t allow the crisis to wipe out the positive demographics.”