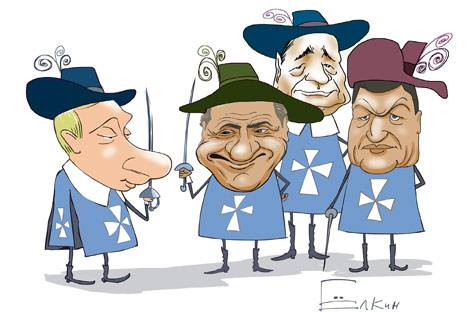 Will Russia’s relations with the West under Vladimir Putin consist of doing business with people he likes and relying on Dmitry Medvedev to pass notes?

I can’t bring myself to refer to Vladimir Putin as the new Russian president. First, he has already been president, and second, it’s not as if he has been anywhere else these past four years. Be that as it may, the world knows Putin very well; it has formed not just a set attitude towards him, but a fixed image. Putin is a permanent fixture in world politics. He has unwittingly become Russia’s leading brand, fashionable in its own way, but also surprisingly demonized, with all the pluses and minuses that entails for our country. What will his relations with other foreign leaders look like at this new stage of his career?

Considering his background, it is thought that Putin is good at establishing relations with people and likes to build his foreign policy on personal links. His close friendships with Gerhard Schroeder of Germany and Silvio Berlusconi of Italy has become proverbial, while these countries have become Russia’s main partners in Europe. Schroeder and Putin were attracted to each other because both spoke German (the chancellor always had problems with his English) and the fact that both of them had reached the pinnacle of power rising from humble backgrounds through hard work. (This was also the basis of the warm relations between Vladimir Putin and former Finnish President Tarja Halonen in spite of their serious political differences). Berlusconi was just too different from the prim and proper European leaders whose adherence to established norms and rules always irritated Putin. And he was also a man one could do some good business with.

This raises a fundamental question, though: should the German and Italian benevolence toward Russia be credited to Schroeder and Berlusconi, or to the fundamental policies of the two countries? Granted, personalities matter. Good personal chemistry can be a catalyst for processes that are by themselves caused by objective logic. But it cannot bring about a tectonic shift.

The relations between Putin and Tony Blair in the same period offer a good example. The British Labour Prime Minister was the first Western leader who started building a personal friendship with the new Russian president even before his inauguration in 2000. Blair was doing so well that other Europeans did not hide their envy. Yet there’s no need to remind anyone of what happened to Russo-British relations in the second half of the 2000s. Even leaving aside the extraordinary Litvinenko case, it is hard to name two states that so thoroughly disliked each other as Russia and Britain during that time.

The relations between Putin and George W. Bush fit the same category. The personal chemistry between them was good enough, and the fact that both embraced religion relatively late in life also brought them together. However, their mutual fondness, far from helping bilateral relations, actually hindered them. The divergence of strategic interests and the imbalance of the countries’ strength resulted in a new low in Russian-U.S. relations. Disenchantment with Bush caused Vladimir Putin to mistrust Barack Obama although he is the nearest thing Bush’s polar opposite. Russia’s future president, however, has come to the conclusion that there is no payoff to be had from close relations with American leaders; tough bargaining and legally binding agreements are the only way.

In contrast, Berlusconi and Schroeder did not forge, but merely consolidated, the special links between Moscow and their respective governments. Italy, along with Germany, was among the first buyers of Siberian gas when it began flowing to Western Europe in the late 1960s-early 1970s. Big Italian and German businesses have always looked at the Soviet/Russian market with keen interest even at the height of the Cold War because it promised great opportunities. Finally, big business in both these countries is traditionally linked with the state and has an impact on politics, albeit in different ways.

It is no accident that for all the dizzying succession of governments before Berlusconi (and during the short period under Romano Prodi in the mid-2000s) and under all the German chancellors from Konrad Adenauer to Angela Merkel, relations rested above all, though not solely, on the solid foundation of mutual commercial interest. The periods of friendship with Berlusconi and Schroeder may have added to the dynamism, but no more than that.

Another remarkable example is Nicolas Sarkozy of France. The two men did not form a close relationship, but Russian politicians, especially Putin, understand his mentality. They share a combination of business acumen (interest in ambitious business projects) and a desire to assert the greatness of their countries. Indeed, Sarkozy’s policy with regard to Russia was marked by two milestones: his role in bringing to an end the Five-Day War and the sale to Russia of Mistral-class helicopter carriers. Both were historic landmarks.

Opinion: Russia to stay the course in Eurasia

In any case, the era of personal relationships is over. Berlusconi and Schroeder have both left politics. Some analysts have said that the future Russian president has a rapport with Turkish Prime Minister Recep Tayyip Erdogan and Polish Prime Minister Donald Tusk. But these relationships seem to be based on the ability to conduct negotiations along with a fair understanding of mutual interest, and not personal friendship. But, of course, it is not about personalities. Interests, mutual or otherwise, will continue to determine whether countries are drawn to or repelled by each other regardless of whether their leaders are ready to spend evenings marked by varying degrees of frankness  or remain buttoned-down interlocutors.

It has long been noticed that Putin finds diplomatic routine and endless protocol meetings with his foreign counterparts boring. He much prefers meeting with big foreign businessmen where all the cards are on the table, protocol matters less and any results are tangible. It cannot be ruled out, therefore, that having swapped jobs with Dmitry Medvedev, he will try to preserve the tandem model, which has worked well in foreign policy. In other words, Prime Minister Medvedev will assume broader functions in foreign policy as a kind of special representative of Putin, especially since he finds it much easier to build a rapport with most foreign leaders. So, the scrap of conversation overheard between Obama and Medvedev in Seoul that caused such a stir, may have been an indication of the model of Russia’s communication with the West in the years to come. “Tell Vladimir…”