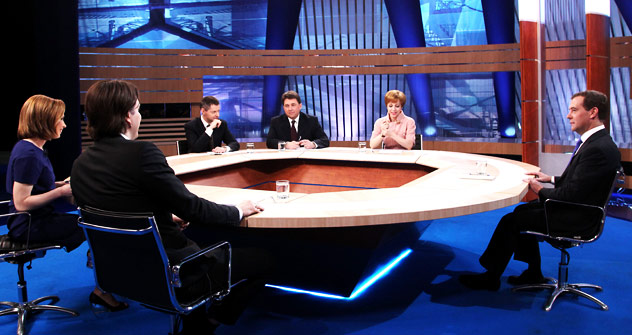 As Russia’s President Dmitry Medvedev is stepping down, journalists start summing up the final outcome of his presidency. Recently he gave an interview to the journalists from the country’s major TV Channels including the First Channel, VGTRK, NTV, REN TV and Dozhd.

The journalists discussed with the president the most important issues that range from economy, business and the country’s investment climate to politics, post-election protests, censorship, corruption and education. Yet this time Medvedev’s interview has been more specific and dealt with the concrete problems and people., unlike his April 24 address to governmental officials.

When asked about the hunger strike in Astrakhan, Medvedev described it as mediocre-American-blockbuster-style event. “I have nobody to blame, but the hunger games reminded me mediocre Hollywood blockbuster,” said Medvedev. “Those involved in this [strike] frequently pursue evident political goals.”

Regarding the Pussy Riot scandal Medvedev was more discreet in his assessments and said he would be as careful as possible not to offend somebody. “Its participants got what they wanted to get – the popularity,” he said.

Censorship on TC channels was also among top of the agenda. Alexey Pivovarov, Russia’s well-known TV journalist complained that political censorship is commonplace on the country’s television which prevents TV reporters from doing their job professionally.  “Censorship is forbidden under the Russian Constitution and if there are any signs of the censorship it should be a good reason for the government interference.”

The president also talked about the imprisonment of two political refugees – Mikhail Khodorkovsky and Platon Lebedev. When asked about their pardon without an official appeal, he said that such practice contradicts the Russian legislature. “Under the Constitution, there should be an appeal. If the president pardons somebody without his appeal, he violates his right for acquittal.”

Post-election protests and falsifications during the parliamentary and presidential elections were also among the issues discussed by journalist and the president. Medevedev said that he treated the protesters with respect and found their demands very reasonable. “Those who took to the streets to voice their position won [my] respect,” he said.

While speaking about the falsifications during the elections, Medveded proposed to come up with a mechanism which will nip the problem in the bud. “This is the task for the government for the future. [We should] create the situation when the violations will be minimal.”

Journalists also asked Medvedev about the reform of Russia’s Ministry of Internal Affairs.  According to the president, this reform is only at beginning stage and requires a lot of time and effort to be fully completed.  While speaking about military reform he repeated that Russian conscript-based army should be more professional. “Now the army recruiting sees changes,” he said.  According to him, Russia’s army should increase military professionals up 85 percent and at same time it should maintain the conscript-based draft at 15-percent level.

Medvedev and journalists also talked about Russia’s international policy and, particularly, about Russian-Georgian relations. Russia has close cultural and historic ties with Georgia and should maintain positive personal relations with Georgian people, the president said.  At the same time he added that that Russia is at odds with Georgian president Mikhail Saakashvili. “We are ready to collaborate with his [Saakashvili’s] successor,” Medvedev added.