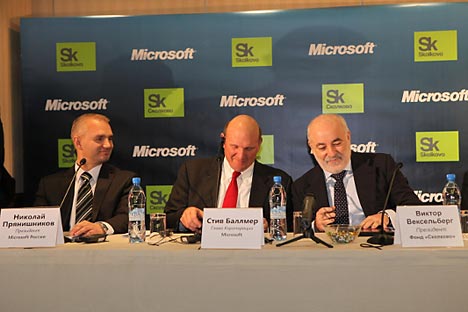 Microsoft plans to invest tens of millions of dollars in research and development program in Russia.

In its R&D center, Microsoft plans to work on applied research and development of Microsoft Dynamics software solutions, which are shipped worldwide. One of the priorities is the development of cloud environment applications such as Cloud Numerics. Alexander Turkot, head of the Skolkovo IT cluster said that as a result of the work at the R&D center, there will be products under the Microsoft brand name in the world market made by Russian engineers.

The Microsoft R&D Center in Skolkovo expects to employ more than 100 IT professionals and scientists by 2015. Moreover, the center will become a platform for applied joint scientific and research activities with visiting experts from Microsoft offices around the world. The center also plans to actively cooperate with the Skolkovo Open University, Skolkovo Science and Technology Institute (SkTech) and other leading Russian universities.

The Microsoft Center team will be established with the existing two-dozen Microsoft employees in Moscow currently involved in product localization. "We made a policy decision that 85 percent of the time, those more than a hundred people that we are planning for will be developing the key functionality. That is, whatever will then be delivered globally," Microsoft Skolkovo Fund work Director Alexei Palladin said.

According to him, a team of developers is working at the Russian Microsoft headquarters at Krylatskoye, and when and how to move the group to Skolkovo is now under discussion.

The plans to house the Microsoft R&D Center in Skolkovo were first announced on Nov. 1, 2010 during a meeting of Microsoft head Steve Ballmer and Skolkovo Fund president Viktor Vekselberg. A strategic cooperation agreement between the two organizations was signed at that time.

Microsoft’s Cloud Numerics product, released in the spring of 2012, is one of the world's first math libraries specifically designed for use in the cloud. With the help of this product, scientific and commercial organizations can reduce the need for large data sets and experimental modeling analysis costs. Skolkovo residents began to actively use the technology under special terms and the library will help them create their own solutions, for example, in financial modeling.

In addition to Microsoft, current Skolkovo partners include Cisco, Ericsson, Intel and Nokia. Microsoft has been operating in Russia since November 1992. The Russian team deals with software promotion, partner network development, products introduction, innovative solutions localization and the IT market development in Russia.

The Skolkovo innovation center is located in the Moscow suburbs. It was conceived as a Russian Silicon Valley but is positioned as a center high-tech development in many fields, not just IT. Skolkovo partner companies are planning to open at least 16 research centers at the innovation center.