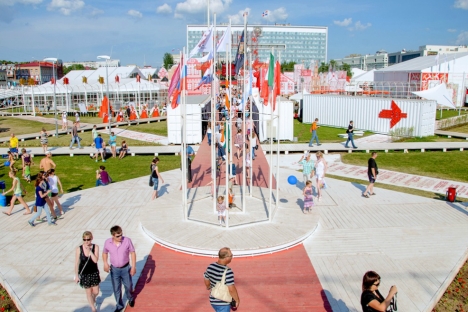 The month-long art festival is being held in Perm from June 1-24. Source: Alexei Zhuravliov

The Urals city is attracting big crowds for its June event for the second year in a row, but some locals question the festival’s ability to pay off in the long term.

The month-long art festival is being held in Perm from June 1-24. Source: Alexei Zhuravliov

For the second year in row, the Urals city of Perm has given itself over to a month-long festival. Every day from June 1-24, visitors can attend concert performances, exhibits, films, arts and craft demonstrations and performance spaces.

“I watched Mexican acrobats, I learned how to model clay figurines, I listened to a whole host of concerts, saw some weird sculptures and others that were amusing,” said Julia, 21, a student, who said she attended the festival mainly because it was free.

The dense crowd that wanders through the city, looking at the wooden booths, the lawns and the sand sculptures, appears to be made up mostly of young people, but the festival has fans of all ages.

“When I saw the collages of the old-fashioned tools we used to use [“Various Skeletons” by Alexander and Olga Florensky], I was horrified,” said Irina, 65, who stumbled upon the festival by accident, but then returned with her friends.  “But it was explained to me that this was a way of restoring our heritage. Since then, I have had fun playing the guide to amaze my friends!”

Festival artistic director Vladimir Gurfinkel said: “We show works that are accessible to the general public. It is vital that the way in which works of art are perceived should be emotional rather than analytical. The spectator arrives with his/her curiosity, and leaves the city with greater inner freedom.”

Boris Milgram, the regional minister of culture and one of the festival’s initiators explained the reasoning behind the diversity of the performers. “We have been accused of inviting foreigners at the expense of local artists. My reply is that our aim was not to satisfy the politicians or the performers, but the public. We are providing free access to the international cultural scene. We are transmitting their values to it. We are educating the public through high quality performances.”

The theater program includes groups from France (“Les Goulus”, Les Plasticiens volants” and “La Grosse Couture”), and Germany (“Antagon” and “TheaterAKTion”). The musicians come from all over Europe (led by Goran Bregovic) and from as far afield as Mexico.

The festival is only part of the cultural revitalization of Perm. In recent years, jobs in heavy industry have dried up, and the city’s population has dropped by around 150,000. “We need to make local life interesting so we can hold on to our population,” said Milgram. “New activities need to be developed to replace industry that is no longer suited to today’s economy. If we are to attract qualified professionals, educated people whom the economy needs in order to modernize, we need a rich cultural offering, not merely high salaries.”

Milgram cites a survey that indicates that in 2008, 60 percent of young people in Perm said they would like to leave the region. “Since then, Perm has had a positive migration balance,” Milgram said, adding that the efforts the city began eight years ago have contributed to this result.

As part of his drive, Milgram invited Marat Guelman, a Moscow art gallery owner and the guru of contemporary Russian art to move to Perm. In the three years that he has been living in Perm, Gelman has installed a major contemporary art museum in the abandoned port. An old hospital has been converted into an artists’ colony and the derelict tobacco factory now houses a large exhibition of artists from the Urals. And that’s not all. Virtually all the façades of abandoned buildings or boundary walls have been made available to artists and are now covered in very elaborate frescos. Land art has also been employed, in the form of a huge arch 12 meters high. It consists of intertwined tree trunks that representing the Cyrillic letter П, the first letter in the city's name. This work by Nikolai Polissky greets visitors arriving from the airport. The other work of art that has become a symbol of the city is the “red man,” a series of sculptures by Andrei Lyublinsky that decorate various squares in the town center. One of them perches on the roof of a concert hall and is illuminated at night.

Through this profound transformation of Perm’s once-drab cityscape, Milgram aims to make the city a European Capital of Culture, joining the ranks of Paris, Berlin and Istanbul. Each year, the EU designates one or two cities a Capital of Culture; during the year, the city is responsible for producing cultural events to promote the diversity of European cultures. No Russian city has ever been accepted into this club.

Many local officials doubt that culture can bridge the gap left by industry. Milgram notes that the strongest opposition has come from the local artists’ association. “They could not bear being placed in a situation in which they would have to compete. For them, I have become the artists’ enemy,” said Milgram, who, in addition to directing the festival is a well known theater director. “They have not understood that contemporary art involves personalities. They want to hold exhibitions in which 60 different artists each exhibit three works. You have to do the opposite – choose three artists, each of whom exhibits a range of their work.”

The festival organizers and the local authorities who support them hope the outlays on the cultural program will eventually reap economic benefits, but at this point depends on the ability of regional, and even federal, political elites to take the long-term view. For its part, the local public has already voted with its feet. In the first 11 days, more than half a million people had visited the festival.

For more information click on the websites of the White Nights of Perm festival  and  Museum of Contemporary Art.