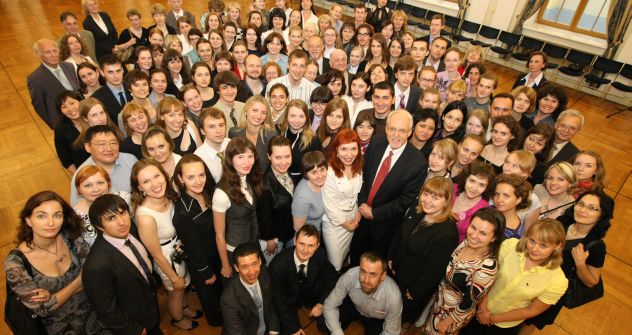 Despite the differences between Russia and the United States, both countries remain committed to educational exchange as a way to promote mutual understanding.

Educational exchange has always been a top priority in bilateral relations between the United States and Russia, and has played an important role in the “reset.” At the beginning of this year, U.S. Ambassador Michael McFaul and former Russian Education Minister Andrei Fursenko signed a U.S.-Russia Memorandum of Understanding for collaboration between the two countries on educational exchanges and related activities.

Statistically, the number of undergraduate and postgraduate students from both the American and Russian sides has been steadily increasing for the last decade, according to the most recent Open Doors report on international educational exchange issued annually by the Institute of International Education (IIE). For example, the number of Russian students in the U.S. in the 2010-2011 academic year was more than double what it had been in 2006-2007. There is also growth among American students studying in Russia, but it is not so robust: In the past four years, the total number of American students in Russia has increased by only about 100.

“We need to get more Americans to study in Russia,” said Edward Roslof, head of the Moscow Representative Office of the International Institute of Education and director of the Fulbright Program in Russia. “The differences between our two countries are decreasing. We can and do work together to address the world’s problems. American students understand this and want to learn more about Russia. When they learn Russian and come to Russia, they fall in love with the people and culture and history.”

Zsofia Budai, a foreign service officer at the U.S. Embassy in Moscow noted that the number of American students studying Russia is increasing. “Anecdotally, we hear that Russian language and Russian area studies programs are popular among U.S. exchange students,” Budai said in an interview with Russia Profile. “For instance, 2009 saw more than 26,000 students enrolled in university-level Russian language courses in the United States, a number that has seen steady growth since 2002.”

According to Roslof, educational programs such as Fulbright remain “central” to U.S.-Russia cultural cooperation.  “We concentrate on helping Russians and Americans learn more about each other’s culture,” he said, “so our two largest programs – English Teaching Assistantship (ETA) and Foreign Language Teaching Assistantship (FLTA) – focus on language teaching.” While young Americans participate in ETA and come to Russia to assist the teaching of English at 36 different Russian institutions of higher education, their Russian counterparts take part in the FLTA program and go to US universities and liberal arts colleges to help teach Russian to American students.

These numbers could increase if there were more funding. While the United States and many European countries offer grants and exchange programs for Russian students to study abroad, Russia’s Education Ministry offers few funding opportunities for Western students interested in coming to Russia. The Fulbright Program, which is funded by the U.S. government, offers grants for Americans interested in studying in Russia. Seventy U.S. citizens came to Russia on Fulbright grants last year.

“I am actively exploring possibilities for co-funding of Fulbright awards by both the U.S. and Russian governments in order to strengthen relations,” Roslof said. “[But] the problem is not the lack of funding by the Russian government, per se. It is Russian laws related to budgets and appropriation of funds over multiple years. The Ministry of Education and Science gives funds to universities for mobility, but they must spend them in the same calendar year. The U.S. government needed to pass a special law (eventually known as the Fulbright Act) to solve this same problem. It is not a simple thing – the rules for awarding funds over several years are complicated.”

There are many educational exchange programs between the United States and Russia funded by the U.S. Department of State. They include the Global Undergraduate Exchange Program (Global UGRAD) and the Edmund S. Muskie Graduate Fellowship Program, which are managed by IREX (International Research and Exchange Board). The Bureau of International and Cultural Affairs of U.S. Department of State (ECA) sponsors these programs as a way of promoting mutual understanding between Russia and the U.S. Nevertheless due to the global financial crisis and its affect on the U.S., some programs have experienced a reduction in funding in recent years. For example, the number of participants in the IREX Global UGRAD program has been reduced by two-thirds, compared with 2011, according to recent data from the IREX office in Moscow.

Traditionally, Russia’s Education Ministry has supported international students from the CIS, or who have relatives in Russia, but not American students. However, Russia has plans to launch an experimental project that would give non-CIS foreigners government-sponsored grants. “About 39 foreign students, including eight Americans, are expected to participate in this project at the Russian Academy of National Economy,” said Alexander Abashkin, associate director of the Stanford-in-Moscow program at the Russian Academy of National Economy last year in an interview with Russia Profile.

{***In their own words: Impact of the educational exchange***}

"The Fulbright Scholarship to teach and live in Russia provides an excellent opportunity both to contribute to stronger academic and policy ties between the United States and Russia. The Soviet Union figured prominently in my decision to pursue a career in academics, and in graduate school I focused on two issues: international security, with particular emphasis on the strategic nuclear balance; and the Soviet Union, the United States’ opponent in the Cold War and the nuclear arms race. Russia has remained a factor in my professional and research activities since then."

"I am excited about the opportunity to revisit St. Petersburg, where I spent two months when it was called Leningrad. I have not had a chance to spend enough time there (or elsewhere in Russia) to understand how Russia has changed in the last almost twenty years. I look forward to teaching at the EUSP for the opportunity it presents to refamiliarize myself with the city, and its people. My husband, Brian Taylor, is a political scientist whose research focuses on Russia, and he will also be teaching at the EUSP. Our twin boys will accompany us, and we are glad they will have a chance to gain greater cognizance of the world outside the United States, and the different ways of looking at the world that we can gain from living in other places. I have vivid memories of accompanying my parents when my father taught as a Fulbright scholar in Colombia, and I think my personal and professional life were shaped in part by this opportunity. I look forward to sharing a similar experience with my children."

"Receiving a Fulbright Scholarship to teach and live in Russia is a great opportunity. Russia is the primary focus of both my teaching and scholarly research. I began studying the language more than 25 years ago and have traveled to the country more than a dozen times in my career, starting in 1985. Despite this long engagement with Russia, for professional and personal reasons it has been impossible for me to live in Russia for long stretches of time since the mid-1990s, although I have regularly traveled there for shorter periods (a month or less) since then."

"The Fulbright Scholarship provides a relatively lengthy opportunity to immerse myself in Russia: in the language, the culture, the politics, the daily life. I am excited about the opportunity to sink into the rhythms of Russian life: shopping at the local market, watching the evening news, visiting museums, and strolling the streets and canals of St. Petersburg. The first Russian city I lived in was Leningrad, where I lived for a month in 1988 on a language program and in 1990 for two months while studying language and politics as part of my Ph.D. studies. Since then, I have spent more time in Moscow for research reasons, but St. Petersburg remains my “first love” as a Russian city. I am particularly excited that I am travelling to St. Petersburg with my entire family. My wife, Renée de Nevers, who is a professor of Public Administration at the Maxwell School, is also teaching at the EUSP as a Fulbright Scholar. Our twin nine-year-old sons will accompany us, and we look forward to introducing them to Russia not in a short tourist visit, but as residents of one of the great European (indeed, world) cities."