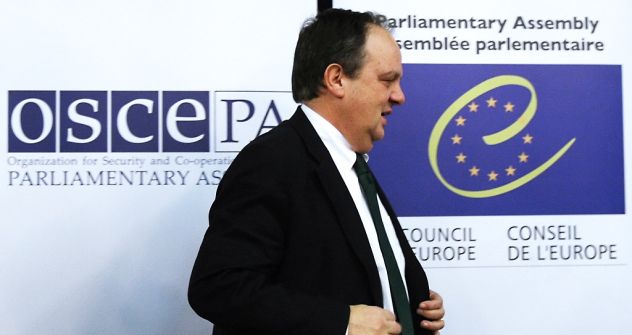 Europe follows the lead of the U.S. in condemning those it considers culpable in the 2009 death of lawyer Sergei Magnitsky. Russia's experts advise against taking the Magnitsky Resolution too seriously.

The Parliamentary Assembly for the Organization for Security and Cooperation in Europe (OSCE) has passed a non-binding resolution calling on all OSCE member states to impose sanctions against those implicated in the death of Russian lawyer Sergei Magnitsky. The resolution was passed despite resistance by the Russian delegation and comes as the U.S. Congress is discussing a ban on travel by those implicated in the case to the United States.

On July 8, the Parliamentary Assembly passed a draft “Magnitsky resolution,” condemning Russia for stonewalling the investigation into the death of Magnitsky, a lawyer for Hermitage Capital Management who died while in police custody.

The resolution, entitled “Rule of Law in Russia: Case of Sergei Magnitsky,” was passed by a majority vote. Its author, Joao Soares of Portugal, was supported by the national delegations of Georgia, Canada, Latvia, the Netherlands, Norway, France and the United States.

The Parliamentary Assembly members recommended that the OSCE national parliaments “take action to impose visa sanctions and freezes on persons responsible for the false arrest, torture, denial of medical care and death of Sergei Magnitsky, for the conspiracy to defraud the Russian Federation of taxes on corporate profits through fraudulent transactions and lawsuits against legitimate businesses; to take action against those officials who participated in the cover-up of all the above-mentioned crimes and for other gross violations of human rights in the Russian Federation.”

The Parliamentary Assembly resolution echoes many of the provisions of the Magnitsky Act currently being discussed in the U.S. Congress. Senator Benjamin Cardin (Democrat-Maryland) had compiled a list of 60 people implicated in the death who would be subject to a visa ban, but eventually the act grew to encompass all persons deemed responsible for human rights violations in Russia. Should the bill be approved, the U.S. Department of State will have three months to submit “black lists” to Congress within three months; not all the lists will be made public.

In a statement discussing the resolution, the OSCE assembly stated it: “welcomes that the U.S. State Department, the UK Foreign Office and the Dutch Parliament decided in 2011 to impose visa bans on some 60 Russian officials believed to be involved in the death of Sergei Magnitsky as a result of the Russian authorities’ inaction.”

In addition, the Parliamentary Assembly said it “encourages the Russian authorities to cooperate with international institutions in investigating Mr. Magnitsky’s death in custody and to issue a public report.”

Said resolution author Soares: “Today we as parliamentarians from across the OSCE area, sent a clear message of support for democratic values and human rights. National parliaments must now follow up to enact visa sanctions and travel bans so those who abuse human rights are kept from enjoying the luxuries of foreign travel and investment in our countries.”

U.S. Senator John McCain (Republican- Arizona) also spoke at the Parliamentary Assembly session. “I believe that the resolution is pro-Russia,” McCain said. “It represents the future that most Russians want for themselves and their country.”

The Russian delegation begged to differ, however, and voted against the document, arguing that the claims against the Russian justice system were unfounded: “Russia is doing its best to prevent the situation with Magnitsky’s death ever happening again,” an unnamed member of the Russian delegation was quoted by RIA Novosti as saying. The Russian delegation accused the Europeans of ignoring the presumption of innocence in the case: “The resolution has been passed hastily and contains inaccuracies and biased data in paragraphs 6 and 9, covering the investigation into the Magnitsky case, while the author of the document, Mr. Soares, seems to have assumed the functions of judge,” said the source.

Russian experts advise against taking the Magnitsky Resolution too seriously.

“I wouldn’t respond at all if I were to act on behalf of Russia. A division of a large international organization expressed its opinion, so what?”said Alexander Sokolov, head of the Public Chamber’s working group for international cooperation and public diplomacy.

He noted that the OSCE resolution constitutes a recommendation and is not binding.

Maksim Grigoryev, president of the Foundation for the Study of Problems of Democracy, shares Sokolov’s view and calls the OSCE Parliamentary Assembly’s decision “meaningless.”

“It is quite hard to influence people by employing such methods. It’s as if the Russian authorities, the Russian parliament decided to freeze the assets of the US military responsible for the tortures at Guantanamo”, Grigoryev said.

“This is an attempt to put pressure on Russia,” which “won’t have a positive result,” he added.

“I believe that such activities should be perceived as a form of pressure, because measures like this will not affect the supposed perpetrators, those theoretically responsible for some Magnitsky-related deals, but sour the general atmosphere of good neighborly relations between the nations. Moreover, the international community fails to understand that the investigation into Magnitsky’s death is still underway in Russia and I believe that the people responsible for his death will, indeed, be punished”, he said.

Sokolov also said that the “OSCE Parliamentary Assembly discredits the OSCE as an organization when it puts such issues on its agenda, because the OSCE has a different mission, namely, to maintain security in Europe.”

Magnitsky died in November 2009 of heart failure, according to the official version of events, while in pre-trial detention at the Matrosskaya Tishina prison. Russian law enforcement has accused only two people of culpability in Magnitsky’s death – former Butyrskaya Prison medic Larisa Litvinova and her colleague Dmitri Kratov. Litvinova was later relieved of responsibility. Dr. Kratov was charged with involuntary manslaughter resulting from negligence; the case remains open.

The article is based on the information from Gazeta.ru and RIA Novosti.