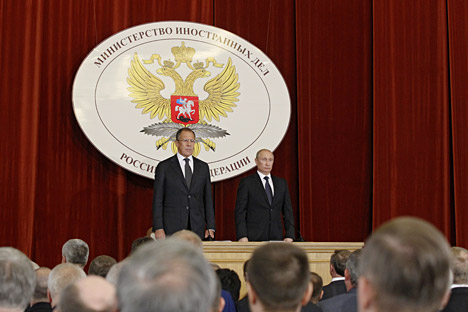 In closed-door speech at the Foreign Ministry, Russian President Vladimir Putin warned the diplomatic corps to get ready for a global downturn and admitted that Russia remains vulnerable.

The traditional biennial meeting between Russia’s president and the country’s diplomatic corps is seen as a way for the leader to clarity the country’s foreign policy priorities, and President Vladimir Putin’s July 9 appearance at the Foreign Ministry tower on Smolenskaya Square was no exception.

“Those involved in the foreign policy sector in the Russian Federation naturally regard the president’s address as a set of specific guidelines,” said a high-ranking official who preferred to remain anonymous.

The foreign policy doctrine that Putin outlined in his speech differs substantially from that President Dmitry Medvedev presented to diplomats two years ago. The first difference is in the list of foreign policy priorities. In July 2010, Medvedev made what seemed a revolutionary speech – he called for foreign policy to be employed with a view to promoting the modernization and even democratization of Russia. The country was supposed to focus on the West, which was supposed to bring know-how, best practices and capital to Russia. Medvedev specifically mentioned Germany, France, Italy, the EU as a whole and the United States. Putin, however, emphasized the need to strengthen relations among the Customs Union countries of Russia, Kazakhstan and Belarus, along with Ukraine. Putin also mentioned relations with increasingly powerful Asian countries, particularly China and India. But that was the part of the message open to the public. Sources say that Putin devoted much of the closed-door portion of the speech to relations with the European Union, including the economic crisis in the Eurozone and its impact on Russia.

“The president shared his vision that the ongoing crisis in the European Union is a systemic one, a decline of the old West stretched out over time. A new wave of the downturn is imminent, and Europe will be affected the most. Yet Russia is also vulnerable, as it is pegged to the European markets. Measures should be taken to mitigate the effects of the crisis on ourselves and Europe,” a source present in the audience during the address quotes Putin as saying. According to the source, Putin noted that Europe could benefit from stepping up cooperation, both economic and political, with Russia. In the public part of his speech, Putin mentioned possible cancellation of visas and plans to establish an open market as ways to improve integration between Russia and the EU.  According to the source, in the closed section of the speech, Putin called for improving relations with Europe as a means of offsetting the influence of China and the United States. The source also said that following the speech, Putin corrected diplomats who spoke too harshly against the West.

Everything old is new again

Vladimir Putin is, in a sense, returning to his first steps as Russia’s president – back in the early 2000s, the young leader was one of the main advocates of closer ties with the European Union, and his speech delivered in German in the Bundestag in September 2001 marked the pinnacle of his pro-Western policy. But relations later soured, particularly after the Yukos case, “color revolutions” in several former Soviet republics and Moscow’s gas wars with Kiev and Minsk. Today, however, it seems that the Kremlin is again seeking closer ties with Europe, looking to leverage the EU’s current challenges to improve its status as a partner with the union.

Experts noted few other breakthrough ideas in Putin’s speech. “It is clear from Putin’s most recent foreign policy speeches that he looks at the world system as if it were already hit by a new crisis. The world is chaotic, it has no clear development objectives, and everything state leaders are currently doing merely aggravates problems rather than resolving them,” said Fyodor Lukyanov, editor-in-chief of the magazine Russia in Global Affairs magazine. “It seems that Putin is certain that no large-scale strategy is feasible in this uncontrollable world, which is why you need to address specific issues, which will help consolidate the economy and make money in the context of an imminent second wave of the global recession. This is a kind of ‘theory of small deeds.’”

In the open part of his address, Putin gave diplomats two practical tasks. The first is for the Foreign Ministry to help promote Russia’s corporate interests in foreign markets. “So far, we have been mostly losing out to our foreign partners, who are capable of lobbying their business interests more effectively. We have been talking a lot about the resources of economic diplomacy, but we have had no serious changes”, Putin said. The president also insists that diplomats should fight against the protectionism that affects Russian companies on foreign markets and redouble their efforts to promote the products of the Russian military-industrial sector.

The second task is to build up the “soft power” resource. “Our diplomacy has mastered the habitual methods of international work but, when it comes to new technologies, such as ‘soft power,’ there is much that needs thinking about,” Putin said in the open part of his address. “So far, we have to admit that we do not contribute much to forming Russia’s image abroad, so it is often distorted and fails to show what is really happening in this country.”

According to sources, the president spoke more about soft power in the closed part of the speech. Putin said it was not enough to announce something once – reiteration is needed, questions need to be answered and explanations given – many times and to various audiences. It often happens that Russia’s opponents are more successful in bringing their positions home to their audience, even if they are absolutely wrong, “both legally and morally”, Putin said, according to an official in the audience. Another high-ranking official noted that Putin instructed the diplomats to “work more actively with the media.”

Journalists agree that the Foreign Ministry has lots of issues to work out, although they gave the ministry’s PR department credit for recent improvements, including weekly briefings, regular website updates in four languages and recent Twitter and YouTube accounts. However, the Russian Foreign Ministry still lags behind its foreign counterparts in terms of convenience for foreign reporters, who are the ones who convey Russia’s official messages to foreign audiences.

The close attention that Putin has been focusing on “soft power” is attributed to several factors. “Putin interprets ‘soft power’ as counterpropaganda. It is for a good reason that, before the presidential election, he introduced a new term into the diplomatic vocabulary – unwarranted use of ‘soft power,’ i.e., the efforts made by the West to advance its interests via social networks,” said Lukyanov. On the other hand, with the United States and the EU threatening Russia with Magnitsky Act, which would ban some Russian officials from travelling to the West, it is especially important for Moscow to be able to protect itself and enhance its image. Otherwise, the close cooperation with Europe that Putin is seeking will be unfeasible, even amid the crisis.

The article is first published in Kommersant-Vlast magazine.