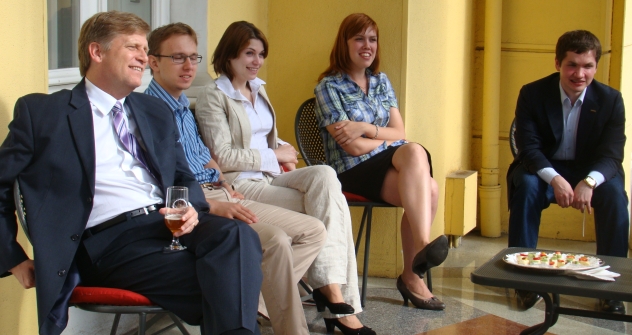 21 students from all over Russia, selected to participate in the joint MIT-Skolkovo project, met with U.S. Ambassador Michael McFaul in his Moscow residence to discuss their future plans.

The first students of this project, Skolkovo Institute of Science and Technology (Skolkovo Tech), now will enter the 3-year Master’s program and upon completion, as expected, will serve as role models for future Russian scholars.

“I have very high expectations for this program. The start has already been extremely interesting and impetuous,” told RBTH Dmitry Vasilyev, a graduate from Moscow Institute of Steel and Alloys, who at Skolkovo Tech will be majoring in Energy Science.

About 200 of young people with minimum a Bachelor’s degree submitted their applications for this program. Only 41 finalists from 15 different regions were invited to Skolkovo to participate in a “Selection Weekend” in May. For three days, students were divided into groups of 6 to 8. Skolkovo Tech senior staff, founding faculty fellows, and MIT alumni evaluated the finalists’ interpersonal, technical, and leadership skills as well as their creativity.

“There were a lot of interesting assignments,” remembers Bogdan Uzbekov, who received his Bachelor’s degree in applied mathematics and physics from Moscow Institute of Physics and Technology.

“For example, we engineered wind turbines that produced electricity. Then we took measurements of which wind turbine had produced higher voltage. We also discussed some philosophical problems like social networks’ influence on society and experiments on animals. Finally, we had individual interviews,” he added.

The Students’ English language skills were also evaluated through TOEFL exams and during group exercises. As a result, 21 students, Russian citizens from 14 different regions, were selected into the inaugural class at Skolkovo Tech.

“The students were a fabulous group of first-year applicants who exceeded our expectations in their technical knowledge, creativity, and sincere passion to make an impact in the world,” said Skolkovo Tech director of students Bram Caplan.

The University’s president Edward Crawley in turn added that the students, “as the first class, will have a unique opportunity to install lasting impact at Skolkovo Tech.” “Most importantly, they will be the class that shapes the culture and curriculum for years to come,” he said.

The 3-year Master’s program will start in August at MIT with a four-week innovation workshop which will be focused on technological innovation and team-based project work at MIT’s campus. In September, the students will start their year-long Master’s-level education in one of the world’s leading universities – Imperial College of London, Hong Kong University of Science and Technology, MIT, or the Swiss Federal Institute of Technology in Zurich. The last two years they will spend in Skolkovo.

“When we return to Skolkovo, we will be working in close collaboration with leading companies who, as expected, will give us sponsorship and involve in their projects,” said Marina Morozova, a Saint Petersburg State University graduate who will be majoring in IT at Skolkovo Tech.

While some students have only vague ideas of what they would want to do with this education, others already have specific projects in mind. For example, Vyacheslav Sabirov, who received his degree in Multichannel telecommunication systems from Moscow Institute of Electronic Technology, told RBTH that he wants to engineer a radically new type of telephone.

“I would want to have my own start-up. I want to create something really new. I expect we will be encouraged to do this in Skolkovo,” he said.

The U.S. Ambassador to Russia, Michael McFaul, who this week met with the students before their departure for the program at MIT, predicted exciting future for the first Skolkovo Tech class.  “If you put yourself into a new environment, it suddenly can change your horizons. You are going to meet new people. You are going to be exposed into new ideas. That’s going to create new networks,” he said. McFaul thinks the students will become a part of the “hyper connected international community” of scientists which will be very beneficial for them.

The U.S. Ambassador to Russia also threw an idea about what Skolkovo Tech students should be working at in the future. “I would like to have my own jet that I could fly very cheaply. So, you could invent that – jet for the middle class,” McFaul said laughing.

Skolkovo Innovation Center is a key part of the Russian government’s drive to modernize Russia's commodity-dependent economy. It was launched in 2010 by then Russia’s president Dmitry Medvedev. Skolkovo hi-tech hub is planned to be an ultra-modern science community for the development and commercialization of new technologies. Being set up just outside Moscow, it is intended to become one of the world’s biggest high-tech cities in a few years.

The Skolkovo Institute of Science and Technology was established in 2011 in collaboration with MIT. It is a private graduate research university whose goal is to become one of the world’s best research universities, and bring up scientists and engineers who will be based in Russia.