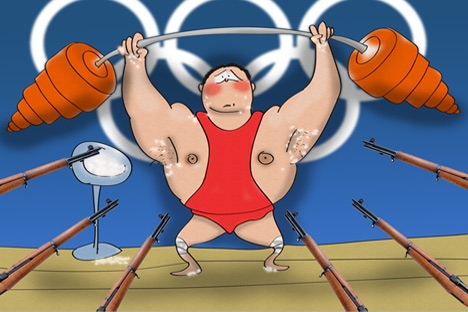 A small, poor nation has a bigger chance of achieving success at the Olympic Games if it is ruled by a dictator.

The Olympic motto ‘Faster, Higher, Stronger!’ is applicable to athletes, but for states, a more effective motto would be “Size, Wealth, Authoritarianism!”

Economists Andrew Bernard and Daniel Johnson have investigated why some countries achieve more success than others at international sports competitions and their research shows that general success at the Olympic Games is influenced by several political and economic factors at once. The determining factors of sports success are size and wealth. Roughly speaking, there should be as many people as possible living in the country – the bigger the pool, the easier it is to find quality athletes – and as much money as possible – to provide sports infrastructure, good salaries for coaches, salaries for the athletes themselves, and for purchasing the equipment they need to train. The most successful countries in sports are those with the largest population and the largest GDP, which explains why the United States has been the world leader in sports competitions for many decades.

On the other hand, if a country is not very big and not very wealthy, it can still improve its international sporting results simply by changing its form of government into some kind of authoritarianism. It is fairly clear that countries with dictatorships turn out more athletic success stories than democracies that are not big or wealthy. Governments that have unlimited power are able to redistribute resources with a focus they need easily and quickly. For example, a dictator can start giving apartments to successful athletes, motivating them more effectively without risking to his political future. He can also emphasize particular sports to the exclusion of others. Belarus, which is currently focusing its efforts on hockey and tennis, is a good example here.

All authoritarian regimes have reached much better results at sports competitions than their democratic competitors of a comparable size. Today, China reliably takes second place in the medals table at every Olympic Games, and everyone remembers similar results achieved by the Soviet Union. It is also possible to cite the less example of Cuba. This country has collected a twice as many medals as Brazil, which is significantly larger and the financial capabilities of these two countries are absolutely incomparable.

Another effective way of improving sports results is hosting an important event. As a rule, host countries demonstrate much better results on home turf those they achieve in the competitions held outside their country. Economists Bernard and Johnson have even dared to make a forecast for the upcoming Olympic Games in London. According to Johnson, the first place in the medals table will be taken by the United States with 99 medals; Russia will come in second leader with 82 medals, and the third position will belong to China, which will win 67 medals. But the UK will take fourth place, with 45 medals. Bernard thinks that the USA will be even more successful to score 103 medals, but the second place, in his opinion, will be taken by China with 94 medals. Russia will be the third country to win 67 medals.