Medvedev does not rule out running for President again 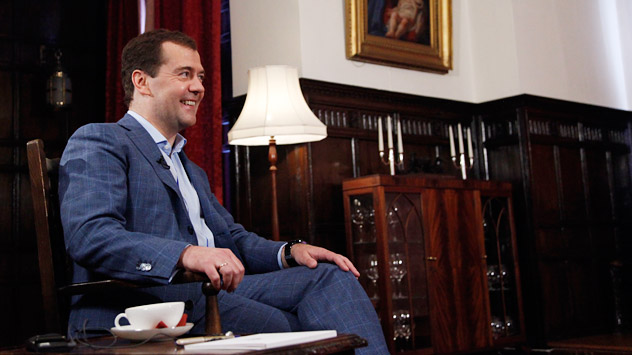 Russian Prime Minister Dmitry Medvedev: "Our civil society has become far more developed, diversified, multi-faceted and much more active. This is the maturing of democracy and development of civil society." Source: ITAR-TASS

Russian Prime Minister Dmitry Medvedev, in London for the opening of the 2012 Olympics, spoke to The Times, about Syria, Pussy Riot and his political future.

The Times: Shall we perhaps start with your impressions of the Games opening ceremony: what do you think about it?

Dmitry Medvedev: I liked it for several reasons. First, it was, of course, a grandiose and expensive spectacle, very well prepared. But what I think is particularly important is that it was a British show – not Chinese, not American and not Russian, and in that sense you managed to create an absolutely British atmosphere. I took a few photos and placed them in Instagram.

The Times: Do you think the Kofi Annan plan has a chance, considering that the situation on the ground in Syria is developing so rapidly?

D.M.: I don’t want to appear to be overly optimistic about the issue because the situation is very difficult and very complicated. But I still believe that the Kofi Annan plan has not exhausted itself, precisely because it is a political plan and a peaceful plan. Indeed, in spite of the seeming differences, the positions of Russia and Britain – or Russia and the U.S. – are not as different as is commonly believed. We all proceed from the assumption that a full-scale civil war, and there is a premonition of a civil war there, would be the worst-case scenario for Syria.

Where the Russian and British positions differ is that we believe that only way to be, after all, negotiations. Our partners call us to more decisive actions. Which brings us to the question: where do resolutions end and military actions begin?

The Times: Are there any signs that you might reach an agreement with the U.S. on the issue of missile defense?

D.M.: I think NATO should make up its mind as to what is expected from the four-stage adaptive approach to setting up of a missile defense. And second, what will be Russia’s role? The proposal I made in Lisbon of a combined missile defense system has been rejected, which is really bad because it would have closed the problem as a whole and, moreover, effectively blocked the states that can pose a real threat to NATO and Russia. But that has been rejected. There is time [to reach an agreement]; I have said it and our current head of state is saying it, but this time is, of course, running out. If we fail to reach any agreements on that score by 2018, this might potentially usher in a new round of the arms race, which would be extremely bad for everyone – costly and absolutely ineffective.

The Times: You have said that Russia is a young democracy and we have seen in recent months the flourishing of activities aimed at creating a civil society. But there have been fears recently that laws are being passed that seek the opposite effect. They are restrictive with regard to demonstrations and NGO activities. For example, there was recently the incident with Pussy Riot, against whom charges have been brought. Do you think these restrictions on freedom are justified?

D.M.: Speaking about our legislation, nothing special has happened in the last few months. But if somebody wants evidence that Russia is again heading for totalitarianism and is infringing upon civil rights, of course such evidence can be found anywhere, in any society and in any country. You have mentioned the law on NGOs: the law passed by the State Duma, in terms of its substance, and the absolute scope of its regulatory part tallies with a whole number of foreign laws, including the well-known American law. Second, the phrase “foreign agents” in no way implies any kind of accusation.

Speaking about other high-profile cases, including the criminal process to which you have referred, I think one should be more relaxed about it. It is the court that will decide whether or not there is (in the Pussy Riot case) corpus delicti, to use legal parlance. If not, then those who staged that action will have been lucky: they will have become famous without taking any responsibility. Having said that, the fact that some of these girls are in prison is a fairly serious test for them and their families, that I understand, of course.

The Times: Do you think civil society in Russia is in good shape or is more work needed to increase pluralism and diversify civil society?

D.M.: Our civil society has become far more developed, diversified, multi-faceted and much more active. This is the maturing of democracy and development of civil society. That our people are not indifferent to the results of elections was demonstrated by the elections to the State Duma and the presidential elections, which saw an unusual level of civic activity. Incidentally, the whole package of changes to the political system that I formulated in December is also, essentially, a result of the development of our civil society.

The Times: Do you think that Russia has fully entered the Internet context? Does the older generation fully understand the need for total transparency and direct communication between top officials and the people?

D.M.: No government in any country, including the most complicated regions, such as the Middle East, can afford to ignore the vast network of communications that spring up, grow and live independently from the authorities, much as the authorities might dislike it. What does that mean? It means only one thing: no leader can be modern and be in touch with the current social conditions if he ignores the new information environment. In my opinion, at the end of the day, only a person who is in direct contact with the people has a political future. I, for one, read at least fifty messages addressed to me personally via Facebook, Twitter and other social networks, or simply through my Internet site daily.

The Times: This brings us neatly to our last question. If, for example, you had a chance to run for President again, what would you do?

D.M.: I am not a very elderly politician. I have never ruled out for myself the possibility that, in the future (I am not going to leave politics just yet), I might run for president, if, of course, our people are interested in me doing so. If our people get fed up with this and they tell me “goodbye”, then I’ll get down to writing my memoirs.

This interview has been abridged from the original. The full version can be found in Russian on the website of the Russian Government: http://government.ru/docs/19842