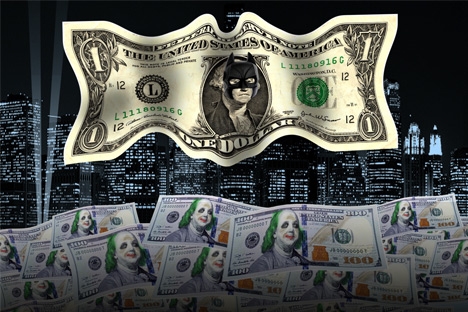 The global financial system is based on efficiency, not fairness, and it is unlikely that any major changes would produce anything better than what the world already has.

In recent years, Russia has been claiming to be spearheading a reform of the global financial system. I believe the time has come to ask ourselves in all sincerity if the critics of the current global financial regime can actually come up with something better that also addresses all the recognized problems with the system. First, it is important to identify the main complaints against the global financial system. Here is a short list: In recent years, the capital and derivative markets have suffered from “bubbles” that, when they explode, can have a catastrophic effect on the real sector; developed economies live mired in debt paid for by developing countries; economic imbalances keep growing, while consumption is skewed in favor of the “golden billion”; and finally, certain countries “rule” the world economy thanks to their ability to issue reserve currencies accepted by the rest of the world. Many economists in developing countries, Russia included, call this an abomination, but is it really true?

At the end of 2011, the combined global capital market capitalization was valued at $47 trillion, or 67 percent of global GDP, compared to $2.9 trillion, or 34 percent, in 1960. Admittedly, as a result of the 2000-2002 and 2008-2009 crises, this indicator shrank in the developed countries alone by $6.3 trillion and $10.2 trillion, respectively, which is a lot. But the global economy did not collapse. It did not contract in 2000-2002 at all – in fact, it grew by 7 percent in the U.S. and by 5.3 percent in the EU. During the 2008-2009 crisis, the economy shrank by 3.8 percent in the U.S. and 3.7 percent in the EU, but no financiers started jumping from their office windows. It seems that today the inflated financial sector serves more as a safety valve for the real economy, protecting it from overheating, which is clearly a benefit rather than a dangerous and untreatable flaw.

It is true that developed economies “live on credit,” but this is not necessarily a bad thing. Debt is a quintessential growth tool. From 1960 to 2010, the combined indebtedness of America’s households and corporations increased 37.2 times (unadjusted for inflation), whereas its GDP rose 28.3 times in nominal terms and its economy created 73.4 million jobs. In the EU, private sector debt rose just 22.1 times during the same period, but its GDP increased 16.7 times and only 10.2 million jobs were created.

I argue that the modern financial system is the best thing that can be invented globally today. This is evidenced by the fact that today’s economy lacks anything remotely similar to the crises of 1907-1908, 1929-1932, or 1973-1974. The existing financial system allows inflation of huge “bubbles” of fictitious assets, whose devaluation does not ruin the real economy simply because the money shown on account statements never actually existed in the first place. This financial system allows the creation, out of thin air and in a matter of days, of trillions of any currency units, which are capable of stopping the worst economic downturn and prevent a new global depression. Creation of this unsecured money supply supports consumption and encourages development of manufacturing, while the international imbalances that arise open up new prospects for emerging economies.

Bear in mind that the countries that issue the reserve currencies virtually cannot default on their obligations because they have promised to pay investors back with more of the same currency units they print. And should investors wish to exchange their money for assets located in those countries, prices will rise and balance will be restored. The seeming imbalances in fact conceal an amazingly well-balanced and resilient financial system and crises like the euro zone’s are generated by Europeans’ hesitation to use the instruments available to them, rather than by the system’s inherent contradictions.

A market economy cannot develop except through ups and downs. At first sight, the existing financial system maximizes the amplitude of these cyclical dynamics but, in reality, by creating storms on the surface, it leaves the real sector relatively intact by allowing it to develop steadily.

If an attempt is made to regulate the money supply on a global scale, the world economy will return to living “within its means.” Consumption in the U.S. and Europe will shrink by at least the amount of their trade deficits –by $1 trillion annually. The economy will contract by 4-5 percent a year for several years in a row. Capital markets will lose more than half their valuation as financial sector institutions slash mutual debts and sell off risky assets. Depending on their speculative component, commodity prices will fall by between a half and three-quarters. Governments will no longer be able to support their companies with the ease they do now.

Throughout the 2000s, a period of the greatest imbalances and hardest financial shocks, emerging economies were growing at an average annual rate of 6.2 percent compared to 2.1 percent in developed countries. During that period, the combined value of commodities bought annually by the “first” world from resource-based economies rose from $400 billion to $2.1 trillion. Developed countries themselves created fewer than 10 million jobs, while emerging economies created more than 230 million.

Furthermore, the financial shocks caused no losses to bank depositors in developed countries, unlike what happened in the early1930s. Additionally, their GDPs and the level of consumption by their citizens did not decline. The “unfair” and “unmanageable” financial system that took shape after 1971 has, in effect, helped developing countries rise industrially and allowed developed countries to maintain their growth rates and become the hub for technological innovation. The U.S. and Europe served as a tugboat for the economies of the rest of the world in the 1990s and 2000s, and this should not be forgotten.

Also consider this: failures and problems haunted mainly those countries that tried to make their currencies quasi-convertible and to peg them to the U.S. dollar, be it Asia in 1997, Russia in 1998, or Argentina in 2001. Freedom to manuever is worth more in the modern world than any advantages of “stability.”

However unfair the existing financial system might seem, any alternative to it would be less efficient. Whichever way you look at it, the economy is a system based on efficiency and not on fairness. And whenever anybody tries to destroy it for the sake of contrived ideas, efficiency tends to evaporate but fairness never arises. That is why I deeply believe that, despite “the abundance of choices” in the field of financial regulation, today there is no substitute for the existing system.

Vladislav Inozemtsev is Director of the Centre for Post-Industrial Studies.

The text has been abridged from the original version. It can be read in Russian in Kommersant.ru.