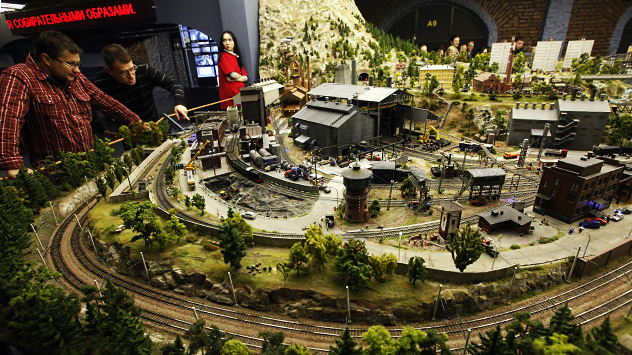 Moscow is sorely lacking in organized recreational spaces, so there is a huge demand for this kind of product, experts say. Pictutred: The maket of the theme park, which will feature a “Russia in miniature” exhibit. Source: RIA Novosti / Alexey Danic

The theme park, which will feature a “Russia in miniature” exhibit, will be funded partially by the state and partially by donations.

Russian President Vladimir Putin has given the go-ahead to a Russia-themed amusement park to be built on the outskirts of Moscow near Domodedovo airport. The park will include a “Russia in miniature” exhibition, and the largest safari park in Europe. The project is expected to cost more than 50 billion rubles ($1.5 billion).

Take a vacation in the city

Funding for the theme park will be provided by the Russian Geographical Society, of which Putin is the chairman of the board of trustees. Detailed discussions are not yet underway, but Putin has already hinted that the state’s investment will not cover the costs. “My millions are the result of other people’s toil,” he said, quoting famous Russian art patron Innokenty Sibiryakov, “and it feels wrong to take possession of their works.”

Putin made the announcement surrounded by some of the richest people in Russia, including billionaires Mikhail Prokhorov, Viktor Vekselberg and Oleg Deripaska and the Heads of the country’s largest state-owned companies, Vladimir Yakunin (Russian Railways) and Evgeny Dod (RusHydro).

This is not the first attempt by the state to create a miniature Russia. During the early Soviet era, a plan was made to construct such a place outside Leningrad, but the plans were abandoned with the onset of World War II. The project was resurrected by Soviet leader Nikita Khrushchev in the 1960s and slated for construction in western Moscow in the Mnevniki area, between Fili Park and the Krylatskoe rowing canal. The plan was to create a Soviet Disneyland, but the project never came into fruition. Former Moscow Mayor Yury Luzhkov returned to the idea in the 1990s, backed by Zurab Tsereteli’s Children’s Wonderland Foundation and Korea’s Lotte Group. Current Mayor Sergei Sobyanin also considered the 351-hectare space just last year, but now the project has been taken out of the hands of city hall.

The project has already found its first donor, investment and development company Coalco, which donated 1,000 hectares of land for the project.

The participants in the meeting agreed that the plan was not to copy amusement parks from around the world, but to borrow a few elements to create something unique. Moscow State University Rector Viktor Sadovnichy recalled a similar village in China and offered to organize a festival at least once a year that would attract tourists for a whole week, rather than for just a day or two.

Shoigu said that draw of the park should be its comprehensiveness. “All 17 million square kilometers of our country will be represented in the park. And, once you have been seen it, you will be inspired you take the journey for real,” Shoigu said. “It will unite the whole of Russia. You’ll be able to go from Vladivostok to Kaliningrad by bike.”

The plans also call for the involvement of regional governors, who should provide both financial and creative input, so that the park will accurately reflect their regions identities.

The project faces fierce competition from similar projects that are already in the pipeline, some of which will be located in the city of Moscow itself.  The BIN Group plans to build two theme parks, one in Moscow and another in New Moscow: A 150,000-square-meter Universal Studios Moscow may very well become the main attraction of the multifunctional 700,000 square meter “Galaxy” complex, located at the intersection of the Moscow Ring Road (MKAD) and Varshavskoye Shosse. The second entertainment complex is set to appear in the west of Moscow, not far from Skolkovo in the outskirts of the city, where BIN plans to build a multimodal transport hub by 2016. Next to the hub will be a multifunctional complex with a Legoland theme park. These colossal construction projects will cost $2.8 billion and $1 billion respectively.

The Moscow government still hopes to use the Mnevniki area for a third amusement park project. At least two companies are in the running to develop the 351-hectare floodplain – the Ingeokom Invest and Kievskaya Ploshchad. The project proposed by Ingeokom is of a “fun” city-park with the construction of 2.9m square meters of commercial and residential real estate worth more than 100 billion rubles in investments. The budget proposed by Kievskaya Ploshchad, the owners of the Evropeisky mall, is a little more modest; they plan to build a 700,000 square meter Moscow amusement park for just 60 billion rubles. It was this project that proved to be the most popular among Muscovites, according to a recent city government poll. But the vast competition in Moscow and the surrounding area does not worry the developers. “We don’t see ourselves as competition,” said Nadezhda Spiridonova, press secretary for Kievskaya Ploshchad, “We have our own vision for the project – and it’s not Disneyland.”

Experts are convinced that the market in Moscow is more than capable of handling a number of large amusement parks. “Moscow is sorely lacking in organized recreational spaces, so there is a huge demand for this kind of product,” said Maksim Gasiev, CEO of real estate firm Colliers Int. Russia. “It is mega-business overseas,” added Georgy Dzagurov. One example of how mega this business is is the fact that Disneyland’s turnover surpassed that of Las Vegas for the first time ever. The problem facing Russian developers, experts believe, is the uncertain profitability of a project that requires huge investment, the climate and the serious lack of professional operators.