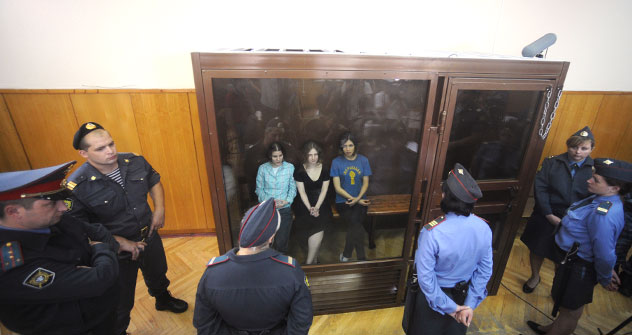 The Moscow Khamovnichesky Court has pronounced its verdict in the case against Pussy Riot members, who will face two years in prison, starting from the moment of their arrest. Source: RIA Novosti

Trial made heroes of the band and brought worldwide attention

Three members of the punk band Pussy Riot were sentenced to two years in a penal colony in the most highly publicized trial to shake Russia since the imprisonment of oil tycoon Mikhail Khodorkovsky.

Nadezhda Tolokonnikova, 22, Maria Alekhina, 24, and Yekaterina Samutsevich, 30, were each found guilty of hooliganism and inciting religious hatred on Aug. 17 for lip synching a “punk prayer” in Christ the Savior Cathedral in February. Their performance, in which they called on the Virgin Mary to rid the country of President Vladimir Putin while dancing in colored balaclavas on the stage of Moscow’s biggest cathedral, sparked controversy among Orthodox Christians, many of whom felt insulted by the stunt.

But their subsequent arrest in March was also widely seen as too harsh a punishment for a non-violent prank – one which was also clearly a political statement, with Amnesty International declaring the women prisoners of conscience in April.

Now, their defense fears for their lives if they are sent to a penal colony.

“This a real threat for their lives and their health,” Tolokonnikova’s defense lawyer, Mark Feygin, told at least a hundred journalists gathered outside of the courthouse. “The government may not want to ensure their security. They are in danger.”

Feygin said the defense would appeal the verdict on all levels, up to the European Court of Human Rights.

“This is a lawless verdict,” Feygin said. “This verdict was not handed down by Judge [Marina] Syrova. It was handed down from above. It is a political decision from the Kremlin, from Vladimir Putin, which he finds moderate.”

The sentence was less than the three years that prosecutors asked for, and may have been a sign of leniency after Putin said the group should not be judged “too harshly.”

Meanwhile, representatives of the Russian Orthodox Church unexpectedly called for leniency in wake of the verdict, with Archpriest Vladimir Vigilyansky even expressing “regret” over the ruling, Komsomolskaya Pravda reported. Vigilyansky called on the authorities to pardon the group members.

Feygin, however, told journalists that the women refuse to ask for a pardon.

The ruling was accompanied by pandemonium outside the courthouse, where over 100 journalists struggled to avoid being crushed as they tried to get into the building. Most of the journalists covering the trial were not allowed into the small courtroom, which is the same one where Khodorkovsky was tried in 2010.

The Pussy Riot verdict has come amid a spate of repressive measures against oppositionist figures, including a charge of embezzlement against protest leader Alexei Navalny that is widely suspected of being politically motivated.

“The government has taken a course of repressions,” said Left Front leader Sergei Udaltsov, who was detained outside of the Khamovnichesky District Court, where he came to support the group. He was released a few hours later. “This will bring more people to the streets in the march planned for Sept. 15.”

Ilya Ponomaryov, a State Duma deputy from the Just Russia party, believes that the trial against the group has galvanized support for the band, which would not have happened otherwise.

“The government is creating new icons that are consolidating the opposition,” he said, referring to Pussy Riot. “They were not very popular in society. But the government has turned them into heroes.” 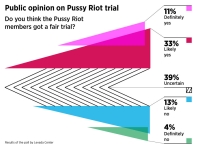 Some 1,500 demonstrators gathered to protest the anticipated verdict, with supporters chanting “free Pussy Riot” down the street from the courthouse, where they were held back by police. About two dozen religious activists, meanwhile, joined the crowd, crying “Patriarch Kirill is our leader.” One religious group burned a picture of a Pussy Riot member hanging on a cross.

Police detained a total of over 20 people outside the courthouse.

Meanwhile, demonstrations of support for the group were staged beyond Russia, in cities that included London, Paris, Berlin and New York. Their trial, which began July 30, has earned the band global attention, with support from an unprecedented number of stars that included Madonna and Paul McCartney.

Some, however, doubt that aside from the international publicity Pussy Riot’s iconic status would last.

“This is not a nationwide topic,” Kommersant journalist Oleg Kashin said outside of the courthouse, explaining that their case had not resonated among average Russians.