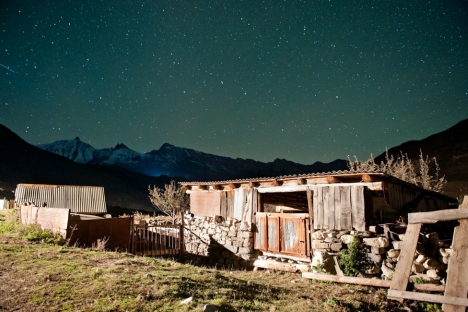 North Ossetians hope to rejuvenate the mountain villages of the republic by developing a tourism industry.

Valery Torchinov has studied every aspect of tourism in the North Ossetia, a Russian republic in the North Caucasus. His knowledge comes from his experience as chairman of the local tourism committee, director of the Kakhtisar holiday camp and his current position – director of his own travel agency, Ardztur.

Torchinov knows that introducing tourism to the North Caucasus is an uphill battle.

“You come to a village and see a magnificent ancient tower there – a few rooms, a large yard, several outbuildings behind the tower, with ancient tools scattered around. You could turn it into a museum! But there are no facilities for travelers,” Torchinov said, adding that he tells residents of such villages that he can help get them a loan to develop their region, “but hill people are like this: If they are offered a loan, they won’t take it. They need subsidies. Just give it to them!”

Nevertheless, Torchinov and the local environmental group Ardz have made some progress in developing eco-tourism in the Caucasus mountains.

At an industry trade show several years ago, Torchinov met representatives from travel businesses in the Altai Region. This region was one of the first in Russia to promote rural tourism, starting in 1998. They adopted a development plan, created a fund and managed to secure state subsidies. The region built new roads, telephone connections, medical stations and hospitals. By 2000, there were 2,000 environmentally friendly guesthouses ready for travelers to the Altai Mountains.

“Every house had a Russian sauna, fantastic rooms, a garden under the windows, and many other things. Also, they offered traditional cuisine – can you imagine that? The trips also featured horseback riding and fishing. A great program!”  Torchinov said. “In 2006, I was the first one to take a tour of mountain villages in the Caucasus. I started making contracts with house owners, worked out routes together with Ardz association specialists. We came up with recreation plans and safety procedures – guidelines for incoming tourists.”

It was clear from the beginning that any plan for developing tourism in North Ossetia had to begin with the mountains. All Ossetians can trace their roots to some mountain village. They can name not only the village, but also describe the family shrine and the fate of six generations of their families. Everybody knows everybody else here. In the 14th century, Mongols led by Tamerlane forced the locals high into the mountains, but the Ossetians managed to adapt. They fed their cattle on slopes, grew vegetables in their gardens, picked barberry and brewed Ossetian beer. Eventually, however, many Ossetians decided that life was easier in the valley. Today the mountain villages are nearly all empty, but old stone towers are still there.

Torchinov’s love for the region is clear in his descriptions of mountain villages, including the beauty of the mountain peaks, the enormous stars in the night sky or the sourness of freshly picked barberry. He spins a tale of how tourists will feel there, living in a simple house with a warm oven, a bathroom in the yard and water in a barrel: a place where visitors can spend the night for just 250 rubles ($8). Guests can either cook or come to some an arrangement with their hosts to try the local cuisine. Local residents usually keep cows and can offer fresh milk, sour cream and mountain cheese.

The vast majority of Ossetians live in the plains, in cities and towns such as Vladikavkaz, Beslan, Alagir, Digor and Chikol. The higher visitors travel into the mountains, the fewer people they are likely to see, and the less life has changed since the area became part of Russia in 1774. Homes are warmed using gas ovens in the plains town of Alagir. A little way up the mountains in Vakats, houses use wood ovens. Still higher in the village of Kamunt, locals use manure heat their ovens. In Galiat, which is abandoned during the winter, there are no ovens at all. It is only a summer destination.

Most Russians criticized the current situation in the North Caucasus

Vakats is a densely populated place by local standards. There are seven households, a telephone line, a regular bus service and a good road. Because the headquarters of the Alania National Park is nearby, Vakats has some government officials and a hotel that can accommodate 15 visitors. It also has horses, pigs, apple orchards and mushrooms in the forest. Artur, a local jack-of-all-trades, believes that there is hope for developing a tourism industry in the area. “We need to create the right conditions,” he said. “And I’ll continue to do so as long as I live. I have shower rooms, toilets, a recreation room, a television. There’ll be a Finnish sauna. We have horses and offer horseback riding. We’ve got mountain bikes, but we don’t rent them. They are not for mountains.”

There are, however, hiking trails fit for tourists in the mountains. They were designed by Moscow State University graduate students who come to Alania every year. Artur helps these students and other travelers, even locals who are interested in finding the exact location of their family towers and shrines, known as dzuars. If he gets a group of eight to ten tourists, Artur offers a range of activities so that his guests have a choice. Artur’s passion is to ensure that everything goes off without a hitch.

“Russians refuse to come here; they think it’s all about guns and the Wild Wild Caucasus,” he said. “They tend to confuse North and South Ossetia. There’s never any gunfire here. We are peaceful people.”

Slightly up the hill from Vakatas is the ancient village of Kamunt. At the end of the 19th century, Countess Praskovaya Uvarova, an amateur archeologist, and her team started excavating old burial sites. Ruslan Bagraev bought a house in the village 15 years ago, when he was a student; now he commutes between Vladikavkaz, where he is a landscape designer, and Kamunt, where he runs an ethnographic museum.

“I spend my summer holidays in Kamunt,” he explains. “My children have spent a third of their lives here. But there are no jobs. I’d move here if I could find a decent good. It all depends on whether we can develop tourism in the area.”

“We had some Swedish people not long ago. I lived in Sweden about eight years ago. They came – saw our mountains, our nature, had our food. They loved it,” he said.

This territory in the mountains of North Ossetia is an undiscovered land – not even known by many Russians. But local supporters hope that someday, a flow of tourists will breath life back into the mountain villages.

Someday, someone will blaze a trail to the Midagrabinsk waterfalls in Dargav gorge. One of the waterfalls is the third-highest in Europe. Water rushes down from the glacier in 200-metre steps. There are dozens of waterfalls – pulsating, freezing, beautiful – and no one has ever seen them, except for the few enthusiasts, because there is no one to build a bridge across small rivers on the way to the them.

This article can be read in the original Russian in Strana.ru website.