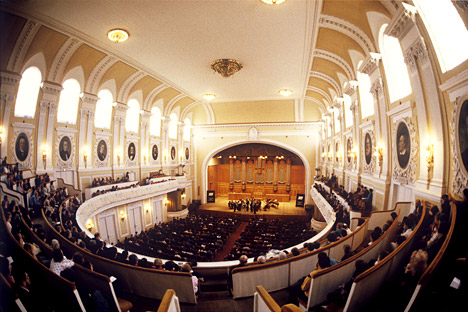 The amount Russians spend on performances and concerts is a fraction of that spent in the U.S., but problems in the sector make it difficult for market players to capitalize on the demand.

Recent studies by Intermedia show that the average Russian spends a little over 10,000 rubles ($400) a year on entertainment – an eighth of what the average American spends. As a result, experts believe there is room for tremendous growth in this market – but it is unclear what segment will drive the growth.

Market surveys show that Muscovites prefer classical music, ballet and theater to other forms of entertainment but most often people go out to see movies. Moscow and St. Petersburg account for the largest share of concert proceeds – between 30 and 35 percent of nationwide ticket sales come from the capital and 15 percent– from St. Petersburg.

The idea that it is necessary to go to the theater at least once a year to be considered a cultured person still persists among the older generation, which ensures demand for classical productions of mediocre quality. But this situation, which arose from the Soviet-era practice of supporting musicians from the state budgets, is not sustainable in the long term. Today in Russia there are 129 professional symphonic orchestras – about twice as many as in the United States – but few of them are fully staffed and ready to perform the proper symphonic repertoire. The Ministry of Culture has acknowledged that the sector needs reform, but has provided no details.

Altogether, there are about 2,700 individual performers and performing companies in Russia, which is a small figure compared to the size of the potential audience. Intermedia notes that this void has been slowly but steadily filled by foreign acts, whose share in the Russian market now totals about 10 percent of the total.

Aside from performers, the major market players are concert organizers and ticket operators. Organizers are a plentiful group and their activity is not subject to licensing. However, there are still issues to be resolved. Large ticket operators choose to work following a supermarket model of sorts, offering the maximum range of products with lowest fee rates. Small business opts mostly for a speculative model, working only with large events and offering unique services for its customers. In this case the markup for tickets can be as much as 500 percent.

Another problem for performers who want to organize shows in Russia is the lack of large, high-quality halls. Even in Moscow there are only a handful of halls that meet the requirements for major international acts. The legendary cinema and concert hall Rossia lost much of its attractiveness after being moved from the center of Moscow and is no longer considered the main stage in the capital. The Megasport ice palace could be the successor to this title, but its acoustic properties are inadequate. The Olimpiisky hall was a model modernist structure in the 1980s, but by now it has become hopelessly outdated, and the modern Crocus City cannot overcome the disadvantage of its remoteness from the center. And unfortunately, nothing seems to be changing in this sector.