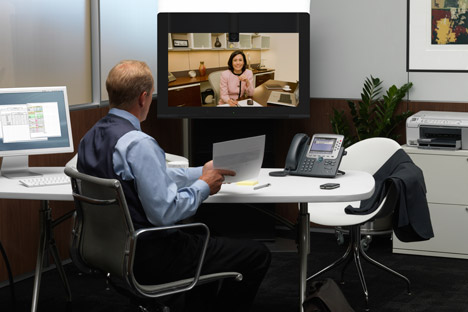 Russian web-conferencing market is very promising, by most accounts, and it has the potential to grow up to $5 million before 2014. Source: Press Photo.

Transnational company Cisco and Russia’s CTI are launching official sales of WebEx, a web-conferencing service, in Russia. By the end of 2013, the partners plan to control 30% of the market, which is currently divided between local players.

The transnational software giant Cisco Systems bought the world’s largest web-conferencing market participant (WebEx) from the U.S. in 2007 for $3.2 billion. WebEx allows up to 3,000 members to simultaneously participate in virtual meetings, sessions, lectures, conferences and seminars. The core platforms are iOS, Android and Windows, while Coca-Cola, Xerox, Canon and Fiat are listed among some of the service’s most high-profile clients. Frost&Sullivan estimate the global volume of the web-conferencing market to reach $1.13 billion by 2015.

The start of Russian sales for the world-popular WebEx conferencing service was announced by CTI Director General Oleg Schapov. “WebEx is a world-wide leader in the web-conferencing market, covering over 50% of the segment. The service should occupy the leading positions very quickly in Russia, too,” Schapov insists.

According to the data from CTI, the annual volume of the Russian web-conferencing market is about $3–4 million. However, the Russian web-conferencing market is very promising, by most accounts, and it has the potential to grow up to $5 million before 2014. According to the estimates of Comdi Director General Dmitry Green, the market is growing even faster than CTI thinks: it increases twice a year; this year its volume will be $6.5 million and by the end of 2013 it will be $12.5 million. Either way, Cisco hopes that WebEx will cover about 30% of the market by this time. “The demand is increasing constantly and the market growth rate is not less than 30% a year, but we plan to grow faster,” Mr. Schapov says.

“An active growth is expected in the small and medium-sized business segment, as the companies require tools for effective joint work and enhancement of sales through training marketing,” Green admits. However, he believes that it is rather late for Cisco to launch the service, since a few, well-established Russian solutions have already been introduced on the Russian market: about 40% of the market already belongs to the two companies Comdi and Webinar.ru.