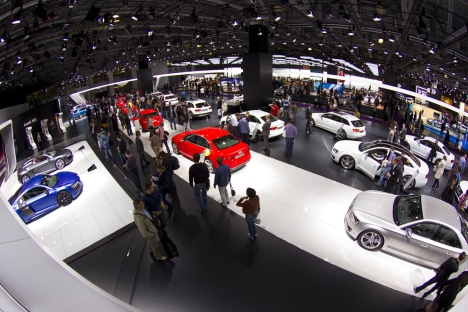 The Moscow motor show drew to a close in early September, naming a number of cars winners in several prestigious categories. The next international motor show in the Russian capital will not take place until 2014.

On Sept. 9, the Moscow International Automobile Salon (MIAS) welcomed its last visitors. Over the entire course of the exhibition, Moscow welcomed more than 1 million people who came to see the international auto industry's latest products. The show proved to be the largest motor show in Russian history.

It could not, however, be said that the show was exceptional in terms of new models. In actual fact, there were more genuine premieres - that is, absolutely new vehicles - in 2010. But the show's exhibition space, in general, and the size of the companies' stands was truly impressive. Two pavilions completely packed with cars and one pavilion just for spare parts had never been seen before. The motor show was not only a presentation of the latest models and newest technologies and concepts, but also an event where the whole family could simply have a good time.

Three days before the official closing ceremony of the Moscow International Automobile Salon (MIAS), the organizers of the exhibition revealed the results of this year's competition for the title of best car in the motor show. The jury was made up of salon-approved journalists who were asked to complete the questionnaires for the competition.

The grand prix in the "Dream Car" category was an obvious choice: the Bentley Continental GT Speed. It turned out that this was the supercar of which the majority of journalists had been dreaming.  Meanwhile, the little Smart car won in the "Best City Car" category. This was the car's debut on the Russian market:  Smart vehicles had not previously been officially sold there.

The supercharged crossover Mini John Cooper Works was declared "Bestn Small Car”. The members of the jury were evidently won over by the car's features. This Mini is equipped with a 1.6 liter, 218 horsepower turbo engine. The Mazda 6 – the most genuine premiere in the show- proved to be the best medium-size vehicle, with the Mazda stand was also winning the title of most beautiful stand at the motor show.

However, the main category at MIAS was most likely "Best Prototype". Here, the jury gave first place to AvtoVAZ, for the winning XRay concept car. This was indeed the most respectable prototype in the history of the Russian motor giant, so the victory appeared well-deserved.

This year in Moscow, apart from the displays, it was also possible to enjoy a new performance by the Honda-developed Asimo robot and to test your strength in vehicle simulators of various types - from normal stationary models to the most realistic replicas featuring hydraulic cabins and 3D sound. The smallest visitors at the motor show had a chance to demonstrate their knowledge of the Highway Code and take part in entertaining games – for prizes, of course.

The next international motor show in Moscow will not take place until 2014.

First published in Russian in BFM.ru.