Russians associate their president with their problems 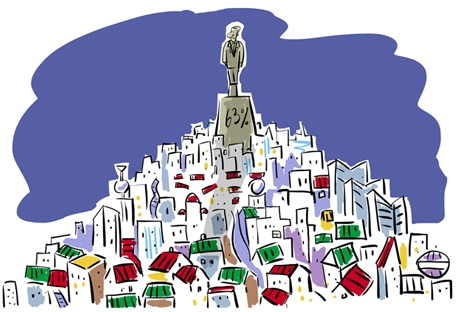 For the first time, citizens are holding President Putin accountable not only for Russia’s successes but also for the country’s troubles.

The buzz these days is about President Putin’s falling approval rating. While it is true that his August rating was down by four percentage points less than July, the rating was down by only one point when compared with June.  Over the past 12 years, the 63-percent approval rating has come up more than once, earning the nickname “the Putin rating.” This tells us nothing about Putin, of course, but a lot about the state of society.

Society, which began to show signs of diversity back in the 1990s, needed a unifying symbol, and Putin has been fulfilling this important function ever since 2000. This accounts for the essential difference between his rating and those of most other political leaders in the world –it is extraordinary stabile. The rating of national leaders usually reflects the successes and failures of their policies. In Putin’s case, there has been no such connection, which is why his rating has been described as “Teflon.” If we cut through the various mystical statements that proclaim Putin as a leader sent to Russia from above, then, in essence, what is being said is that the Presidential figure, in the eyes of the Russian people, does not serve an earthly function. It is not about politics and economics, as is the case with all other statesmen: Russia needs such a leader for its glory. The country’s problems have nothing to do with it – this is not his sphere of responsibility.

This is conclusion is supported by the answers to two questions that the Levada Center has been asking since 2001. One question is: “who takes the main credit for Russia’s successes?” Out of the five possible responses, respondents have picked the answer “Putin” far more often than any other option. The second question asks: “who bears the main responsibility for the country’s problems?”, giving the same options for answers. Responses have usually varied: some said the government, others Medvedev (when he was President) — but nobody has ever chosen Putin.

If approval ratings are anything to go by, then this attitude towards Putin has not changed, at least as they regard responses to the first question on the survey. “Russia’s successes in the international arena, in economics and improving living standards’” are credited to Putin by almost 60 percent of the country’s citizens. This result has registered more than once. But, for the first time ever, experts note that a majority of 51 percent of respondents has dared to say that Putin was “responsible for the problems in the country and the rising cost of living.” The number had never risen higher than 31 percent previously; it was 29 percent a year ago, with 40 percent of respondents holding the government responsible (but not its head) and 41 percent of respondents saying that then-President Medvedev was accountable. This August, three times fewer respondents placed the blame on the prime minister than on the head of state. Most likely, this shows that the times have changed. Now, at least half of the Russian people perceive Putin as an ordinary president who, while taking the credit for Russia’s successes, is also responsible for the country’s ongoing problems.

Alexei Levinson is the head of Socio-Cultural Studies at the Levada Center.