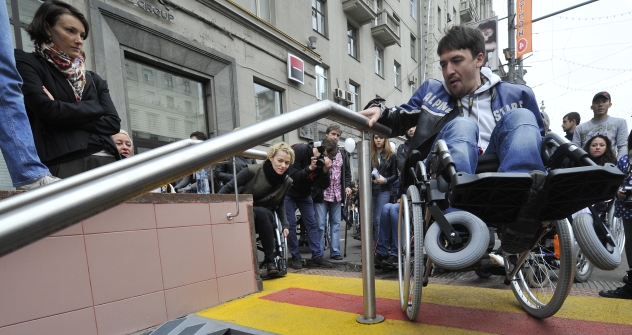 Officially, the streets of Moscow have been adapted for the disabled. But a lot needs to be done. Source: RIA Novosti

Volunteers and disabled citizens took to the streets of Moscow in wheelchairs to test how disabled accessible the city really is.

On Sept. 16, the journal Bolshoi Gorod conducted its third "Access All Areas" rally. Wheelchair users, celebrities and journalists rode together in wheelchairs to check how accessible the streets of Moscow are for disabled persons. Those that took part in the event tried to go into shops, cafés, or simply cross streets and underpasses in their wheelchairs.

The rally was scheduled to start at noon, departing from the city’s Aquarium Garden. The square in front of the park began filling up with disabled persons, journalists, celebrities, and others concerned about the issue, until it began to resemble a metro car during rush hour.

It was not long before participants started encountering difficulties. Part of the group tried to cross Moscow’s main street (Tverskaya Street) through an underpass where a lift for the disabled had recently been installed. The lift worked on the first two occasions, but on the third it came to a standstill; those inside were trapped for several hours. The mechanics who arrived on the scene failed to get it moving again, so they had to evacuate the people trapped inside by wrenching open the doors.

Once participants managed to negotiate the narrow spaces between the metro station steps and the parked cars, the procession finally turned onto the main street. The first establishment to fail the test was a grocery store near the metro. Journalist Sergei Parkhomenko made a show of running into the high step at the entrance shop, to show that the only way of getting into the store was on two legs. Someone placed a sticker on the shop door, displaying a sad-faced man in a wheelchair with a diagonal red line through it and the words “No Access.” Long before it came to the end of its route, the procession ended up running out of these stickers.

There was a mixture of bewilderment and alarm on the faces of those who passed by this unusual parade. They had never seen so many people in wheelchairs before, and the whole scene was made stranger by the scores of journalists in their wake. Some people stayed around, intrigued by what was going on; others tried to hurry past as quickly as possible. Passers-by even summoned the courage to have their photo taken with some of the celebrities. Those that had come to support the participants included popular actor Artur Smolyaninov, economist Ekaterina Yasina, blogger Ilya Varlamov and many others.

Treatment for the disabled: Dance to Live

This was the third year in a row that Artur Smolyaninov had taken part in the rally. “I believe that this rally is doing some good, and the situation is slowly but surely improving year-by-year. Little strokes fell great oaks,” said Smolyaninov.

The procession stretched for several hundred meters, testing the access to shop entrances along Tverskaya. A security guard at a jewelry store tried to rip off the sticker the establishment had earned, but, when the crowd started shouting, he beat a hasty retreat. Unlike the red "No Access" signs, there was no danger of running out of the green "Access Here" stickers. The State Museum of Contemporary History of Russia also proved to be inaccessible, earning it a red sticker, which was placed right on the granite slab next to the museum’s engraved entrance sign.

After more unsuccessful attempts to make it down to the main street’s underpass, participants decided to cross Tverskaya at street level. To do this, the police accompanying the procession had to stop the traffic. This was telling of the situation disabled persons face in Moscow: in reality, traffic will not stop for just one disabled person, especially if there are no TV cameras trained on him at the time.  Consequently, the book store "Moscow", even with its attentive booksellers and all the necessary ramps, turns out to be disabled accessible only for those who live on that side of the street. A person in a wheelchair has a better chance of crossing the sacred river Styx than the main street in Moscow.

Officially, the streets of Moscow have been adapted for the disabled. For example, the curbs at pedestrian crossings have been made low to ground, and there are wheelchair ramps in underpasses (though it is impossible to use them unassisted). At the entrance to a Megafon mobile phone shop there is a button for the disabled. When the button is pushed, a shop employee is supposed to bring out a wheelchair ramp. But when participants of “Access All Areas” pushed the button, they received no response; the ramp was nowhere to be found in the shop.

Alexei has been in a wheelchair since he was seventeen. He lives a full and active life:  he recently returned from an international marathon and went to the UEFA European Football Championship this summer. Unlike the "celebrities" in the procession, Alexei was not testing the accessibility of shops. “I don't need to run my wheelchair into a step to grasp the level accessibility in the city. I have a sharp eye for this. Needless to say, you encounter problems at every turn. But there have been noticeable improvements in Moscow: there are more ramps, entrances, low-floor buses. Still, it must be said that they are few and far between,” the teenager said.

Related: An archery club for the disabled

Vladimir Akhapkin has been in a wheelchair since birth. He is also the first disabled fashion model in Russia. “I get the feeling that the city infrastructure intended for disabled people has been designed by people who have no clue about how it will work. The lifts and ramps are a box-ticking exercise. Some metro stations have special lifts for the disabled, but you often find that the metro staff doesn’t know how to use them,” said Akhapkin.

The flawed infrastructure is not the only problem disabled persons face in Moscow. For the most part, society is not willing to treat them as equals. “One day I went to a cosmetics store, but despite the wide aisles and easily accessible entrance, the guard simply refused to let me in,” Akhapkin said. “People are surprised that a disabled person would want to look good and take care of himself. But we also want to live a normal life, go to shops, cafés and clubs. I cannot see how our situation will improve until society understands that we all need start helping each other out if we are to fulfill our potential.”