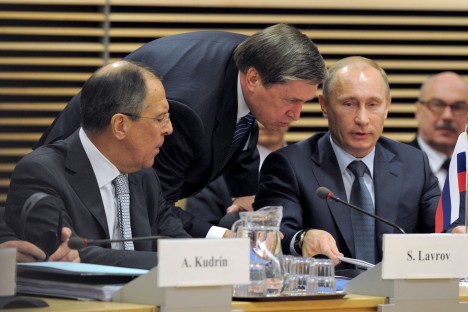 Kommersant-Vlast tried to figure out the extent to which external experts influence Moscow’s foreign policy decisions. The feedback turned out to be highly controversial.

The diplomats and foreign policy experts interviewed by Kommersant-Vlast yearn for Soviet times, when expert foreign policy support – in addition to the secret teams of analysts at the Communist Party’s international department, the KGB and the Foreign Ministry – was provided by academic institutions engaged in regional studies.

These were prestigious and well-paying jobs. In addition to research papers, they wrote analytical memoranda that went all the way up “to the very top.”

Academic institutions still write memoranda for the Kremlin, the Foreign Ministry and other agencies. Yet experts and officials from the Russian Academy of Sciences (RAS) research institutions and other organizations admit that the system has been in sharp decline since the collapse of the Soviet Union (the latter have asked us not to mention their names or the names of the institutes for which they work).

The main problem is low pay, which caused an outflow of personnel in the 1990s, and the lack of funds to buy books and pay for foreign travel.

Our source at the Kremlin was categorical in his appraisal of the situation: “The product put out by the academic institutions is outdated. Very little of it is useful.”

RAS institutions may have a higher citation index than other research outfits, but their influence on decision-making is far below that of many other institutions. Our respondents single out the Institute of World Economy and International Relations (IMEMO) as the only RAS institute for which there is some demand.

The degradation of academia in the 1990s went hand-in-hand with the overall decline of government officials’ interest in external assessments.

“The scientists continued to write things mechanically, and the diplomats continue to read them mechanically. There were no resources to change anything. Those were lean times. The country’s potential was not what it is now,” said a high-ranking diplomat.

As a result, interest in quality analytical foreign policy support was revived only in the 2000s, when the state once again had the money and the desire to pursue an active foreign policy.

In this regard, experts take special note of Dmitry Medvedev’s time as president. On the other hand, it was during Medvedev’s presidency that a new problem cropped up, says Vladimir Orlov, director of the Russian Center for Policy Studies.

“Government bodies are showing such an interest in our products that we are simply unable to satisfy,” said Orlov.

In 2010, Moscow took the first steps towards creating a competitive market for independent intellectual products catering to Russian foreign policy. The Kremlin sought expert help in preparing defense projects, such as the European Security Treaty and the analysis of Chinese weapons exporters.

“But when you talk with the specialists at Rosoboronexport, you feel that they are aware of our main recommendations. In other words, all this is taken into account,” said Ruslan Pukhov, director of the Center for Analysis of Strategies and Technologies. Analysts note that, in the last two years, the Kremlin has made it standard practice to commission research.

The Russian Institute of Strategic Studies (RISI), created by presidential decree in 2010 and headed by Lieutenant-General Leonid Reshetnikov, is a separate case. Reshetnikov says that the opinion of RISI analysts is actually taken into account.

“At least we have been getting replies to many of our reports from the Administration with the words ‘Thank you, your opinion will be taken into account’ written in the hand of the presidential foreign policy adviser. This is very motivating,” said Reshetnikov. “We get specific assignments, proposals and requests. This is not a one-way street – we have feedback, which is very important.”

However, government officials and experts say the number of influential think tanks can still be counted on one hand. Amongst the organizations dealing with defense policy, the Center for Analysis of Strategies and Technologies is named as the undisputed leader by bureaucrats and state corporation managers.

Other authoritative organizations directly in the field of foreign policy – not counting the RISI and RAS institutes – are the Russian Center for Policy Studies, the Foreign and Defense Policy Council and the Carnegie Moscow Center.

Many perceive Fyodor Lukyanov, chief editor of Russia in Global Affairs, as a stand-alone think tank.

“The key problem is that interaction with experts is erratic. Personal relations play the most important role. If an expert and a government official know and trust each other, they have normal dialogue. But this is sporadic communication, and not a whole environment,” our source at the Foreign Ministry said.

Experts are unanimous in their opinion that, in order to solve the problem of analytical foreign policy support, the state must create a transparent and adequately-funded market in which think tanks can compete.

The Russian International Affairs Council (RIAC), which has an annual budget of 100 million rubles ($3.2 million), is contributing to the solution of the problem. Its managing director, Andrei Kortunov, hopes that RIAC will become the platform for consolidating Russia’s current foreign policy expertise and solving systemic problems through interaction between experts and authorities.

These problems include the inability of many academics to write memoranda that can help officials in their practical work, the lack of a long-term strategic vision among bureaucrats who are concerned with specific tasks, and the lack of alternatives in working out foreign policy recommendations.

The full Russian version of this article is available in Kommersant-Vlast political magazine.