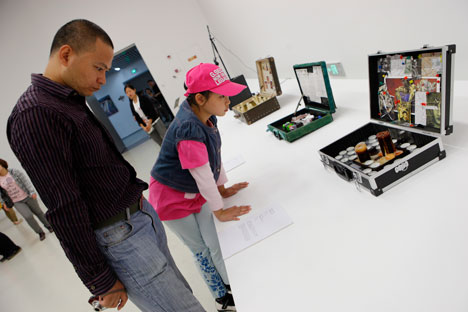 The Ninth Contemporary Art Biennale has opened in Shanghai. For the first time, it is being held at a reconstructed power station – a new modern art museum called the Power Station of Art. Three Moscow artists are represented in the Biennale, along with an exhibition called "Haunted Moscow."

Unlike the Venice Biennale, this year’s event in China showcases specialized pavilions dedicated to specific cities, rather than to countries. The Shanghai show features exhibitions from Moscow, Barcelona, Antwerp, Dusseldorf, Mumbai, Dakar, Detroit, Istanbul, Sao Paulo, Lima, Palermo and many others.

The Moscow pavilion houses an exhibition called “Haunted Moscow,” where the work of three Moscow artists will be on show.

Andrei Filippov has two pieces on display. The first piece, entitled "The Power Vertical" and depicting small guillotines mounted on easels, illustrates the artist’s ongoing fascination with the past reflected in the future and the concept of Moscow as the Third Rome. The theme of revolution is also clearly present in the work, symbolized by the guillotine.

His second piece, "Rolling Blackout", is related to religion – mechanical fans open and close to either reveal or conceal lights; on the fans an angel’s hand is displayed holding a message on a scroll.

“Fillipov firmly believes that Russia’s history can only exist in the context of the Byzantine cultural tradition. Even so, by introducing the metaphor of the revolutionary past, he underlines how the model of the Byzantine Empire in the Russian consciousness is forever linked to the Soviet model of empire,” a staffer at the organizing Stella Art Gallery told RIA Novosti.

Russian artist Dmitry Gutov created a large installation especially for the Biennale, based on his Lifshitz Institute project.

“The institute is dedicated to the outstanding philosopher Mikhail Lifshitz – a figure who had been entirely ignored until the end of the perestroika era, which is when I began to study his work. He mostly wrote about Marx and Lenin and spoke out against contemporary art. Here in Shanghai, I’m exhibiting a cross-section of his research. There are 27 stands, each of which is dedicated to some particular aspect of Lifshitz’s work, biography or art,” Gutov told RBTH.

“His work remains relevant today. When the cracks began to appear in the Soviet regime – the project opens at the end of the 1980s – it was clear that a huge retrograde movement that tended toward reaction, reactionary obscurantism and everything that we are now experiencing today was beginning.

“All our understandings were seriously distorted during the Soviet era. The delight in religion taken by the intelligentsia was thought to be a progressive development – practically a struggle for freedom. From my youth, I personally believed it to be something unnatural. But I saw people’s interest in Marxism as a conduit leading to the future. Today we stand once more at the origin, and everything comes into place. Political reaction is united with obscurantist reaction, and everything assumes a visible shape. And Marxism is becoming what it should always have been – a struggle for human freedom.”

The third artist at the Moscow pavilion is Anatoly Osmolovsky. The Stella Art Gallery is exhibiting one of his older pieces, Products, which dates back to 2006. His is a collection of bronze cast models of tank towers from every country where tanks are in production. In addition, Osmolovsky has brought some of his students’ portfolios to Shanghai.

This is all because one of the main credos of the Shanghai Biennale is re-education.

Gutov tells his pupils – and anyone else who wants to know – about Lifshitz, while Osmolovsky has been giving lectures and running practical courses about contemporary art at his training center for many years. Osmolovsky asked his students to create works that would fit into suitcases. One suitcase is tightly closed and voices can be heard coming out of it. Another suitcase is like Russian stacking dolls (called matryoshka); inside it is a smaller suitcase, and then a smaller one inside that, and so on. Another suitcase is stickered with memories.

Originally, four Moscow artists were supposed to be participating in the exhibition, but one of them – Yuri Albert – fell victim to Chinese censorship.

The censors spent a great deal of time looking over his work before the show opened and listed two faults against the artist’s piece, which earned Albert artist of the year honors at the Kandinsky Awards last year.

Albert’s Moscow Poll piece consists of a ballot with two questions: “Is the fact that none of the selected Russian artists protested about the war in Georgia a basis for changing your opinions about contemporary art?” and “Is the quality of contemporary Russian art affected by increased censorship and self-censorship?”

Such questions were most unwelcome to the Chinese censors, and they demanded that they be removed from the exhibition. The curators of the show tried to persuade them against this, citing the Kandinsky Prize as evidence that these questions were not a reference to China – but all to no avail. Albert himself refused to attend a meeting with the censors, and did not participate in the Biennale.