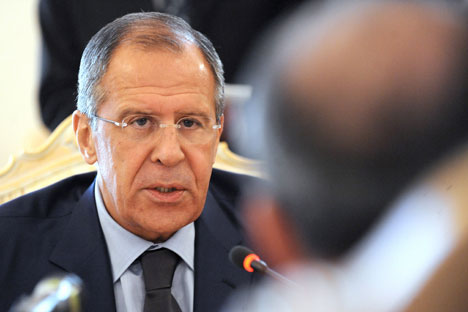 Russia's Foreign Minsiter Sergei Lavrov: "Given the computer origin of the term “reset,” it is clear straight away that it cannot last forever. Otherwise it is not a “reset,” but a malfunction." Source: ITAR-TASS

{***The USAID withdrawal and the observance of international law***}

Russia's Foreign Minister Sergei Lavrov explains why the U.S. Agency for International Development (USAID) was recently expelled from Russia, what lies in store for the "reset" with the U.S., and why Western support for the "forces of change" in the Middle East is misguided.

Elena Chernenko: Your address to the current session of the UN General Assembly made repeated reference to the inadmissibility of interference in the internal affairs of other countries. Were you speaking only about the recent events in the Middle East? Or does this also pertain to Russia?

Sergei Lavrov: Certainly. The principle of non-interference in the internal affairs of states is enshrined in the UN Charter. It is not there to make Russia feel better or worse. It is a basic provision and a fundamental principle of international law. If we allow this principle to be violated or do not adhere to it in relation to countries that are poorly equipped to defend themselves, it will lead to a chain reaction. The world will simply plunge into chaos. We can observe this trend in the Middle East.

E.C.: The doctrine of non-interference in the internal affairs of others also resonated when USAID announced its withdrawal from Russia. In what particular way did the agency anger or upset Moscow?

S.L.: Nothing angers or upsets us. We had an agreement dating back to 1992, on which basis the Agency for International Development began operating in the Russian Federation. Just remember what things were like back in 1992. The country was completely disjointed and, perhaps, failed to perform with due diligence when signing documents with foreign partners.

The agreement that formed the basis for the USAID’s operations discriminated against Russia in every conceivable manner. It granted rights to our American partners that, under normal circumstances, would have been totally unacceptable.

A year ago, we dissolved the agreement, thereby removing the legal basis for the agency's activities in Russia.

It is no longer grounded in law, and we do not need grants; after all, Russia itself is now a donor country. The activity of NGOs is generously funded by the Russian state. President Putin recently instructed that the amount be tripled.

On top of all that, the agency was involved in some very dubious projects, without the approval of the Russian authorities – some of which had clear political undertones.

S.L.: In particular, projects in the North Caucasus, where the agency was not very picky when it came to choosing partners. Some very dubious people in that region received grants.

I want to state one simple fact: there are no obstacles whatsoever to the noble goals pursued by the U.S. Agency for International Development in Russia. They continue to be implemented, be it helping disabled people and children, educational projects, or other social projects. The U.S. government can easily divert this money through other channels.

Overall, I want to make it clear that we are looking to bring the legal framework of our cooperation and relations with foreign countries in all areas of political, economic, cultural, humanitarian, and civil activity in line with the principles of equality and mutual respect.

E.C.: And will European foundations operating in Russia meet a similar fate? German ones, for example?

S.L.: No. These foundations operate on the basis of intergovernmental agreements that were calibrated in accordance with the principles of reciprocity and equality.

I see no reason to attempt to extrapolate the circumstances to other cultural centers and countries.

The U.S. does not have an equivalent of the Goethe Institute, the Cervantes Institute, the British Council, or the Alliance Francaise. USAID is part of the Department of State. The institutions I just listed, despite also being publicly funded, exist as standalone entities.

E.C.: Some believe that, now that Russia has decided to terminate the activities of USAID on its soil, the U.S. is certain to adopt the Magnitsky Act, which seeks to introduce visa and economic sanctions against a number of Russian officials. And that the main losers will be those who hoped this law would be the price to pay for a repeal of the anti-Russian Jackson-Vanik amendment.

S.L.: That is a total misconception. The Magnitsky Act will be adopted in any case. And by no means is it the price to pay for abolishing Jackson-Vanik. The Republicans and many Democrats in Congress have publicly stated that the Magnitsky Act is needed, regardless [of this]. Though, many supporters of the law say that Russia does not deserve a repeal of Jackson-Vanik.

To say that the events surrounding the Agency for International Development have somehow hammered the final nail into the situation, and that the Magnitsky Act is now sure to be adopted as a result, is to completely misread what is really happening on Capitol Hill. The law is turning into a symbol for those wishing to foil U.S.-Russian relations.

E.C.: How should Russia respond to Washington's adoption of the Magnitsky Act?

S.L.: If anyone in America is under the illusion that it's possible to develop cooperation and, at the same time, fence us in with new sanctions, we should part company with them as soon as possible. The attempts to mix trade with politics and put pressure on Russia are poisoning the atmosphere for both bilateral political dialogue and economic cooperation.

E.C.: Given that Russia and the U.S. do not see eye to eye on a range of important issues, such as missile defense, human rights, and international issues, can the “reset” be said to have failed?

S.L.: The vector of interaction set back then has been justified. We have been able to expand the scope of bilateral dialogue and to achieve tangible and practical results. Of course, we've also had our fair share of problems: for example, the regrettable decisions taken by the U.S. on missile defense, without due consideration of Russia’s interests.

Given the computer origin of the term “reset,” it is clear straight away that it cannot last forever. Otherwise it is not a “reset,” but a malfunction. Don't get carried away by the name of this or that stage in the process. It is better to think about how to move relations forward. That is what we are doing.

E.C.: President Barack Obama, in his address to the UN General Assembly, made it clear that, despite the increase in anti-Western sentiment and the rise of radical Islam in the Middle East, the U.S. “will continue to support the forces of change.” What is your gut feeling about that?

S.L.: Personally, I think that our Western colleagues, including the U.S., have lost the plot to a certain extent. They have gotten more than they bargained for. And we are doing everything we can to keep this storm in check. This means, instead of inciting the opposition in Syria to continue their armed struggle to the bitter end — until they get Bashar al-Assad's head on a plate – everyone needs to sit down and start talking peace.

E.C.: How will the situation in Syria unfold? 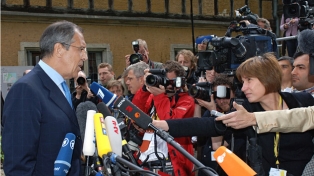 S.L.: There are two scenarios. If the assurances are sincere and the number one priority is indeed to save lives, then the agreement reached in Geneva in late June needs to be carried through.

That is, to make everyone stop shooting and sit down at the negotiating table. But if, in fact, the number one priority is to overthrow of the regime of Bashar al-Assad, then we cannot help you. It is not in the UN Security Council's mandate to do so. In such a case, it can only be described as incitement to fratricidal war, and we have to understand that the price of this geopolitical obsession to remove the regime in Syria will be the blood of hundreds and thousands of these very same Syrians.

The choice is simple but terrible. In my conversations with colleagues, I feel that they understand the lack of alternatives, but are not yet ready to stifle their geopolitical aspirations. That is sad.

E.C.: Why do most Western countries have a mostly negative image of Russia? And can Russia’s Foreign Ministry help to improve it?

S.L.: Unfortunately, Russia has often had to deal with gross distortions of the truth – or even outright lies – on the part of various international media. It suffices to recall the events related to Georgia's aggression towards South Ossetia in August 2008.

Add to this the propagandist hype over the case of Pussy Riot. At no stage of the trial were charges of a political nature brought against the members of Pussy Riot. They were tried for acts of hooliganism inside Russia's largest Orthodox cathedral. The attempts to dovetail the verdict with some kind of “habitual pressure on the opposition” ignore the realities of the situation, which, on the contrary, are serving to liberalize the country's political life.

E.C.: Returning to the Middle East – to what extent have the events in Syria impacted Russia's relations with those Arab countries most strongly opposed to Bashar al-Assad?

S.L.: Of course, the acute internal political crisis in Syria – on-going now for eighteen months – has called for some adjustments in our relations with a number of Arab countries, including Saudi Arabia and Qatar. However, it would be wrong to over-exaggerate the differences of opinion.

Quite the contrary, recent events have demonstrated that the Arabs, including Saudi Arabia and Qatar, are interested in collaborating with us on the Syrian issue and in pursuing joint methods to resolve it.

The interview is abridged version and first published in Kommersant Daily.