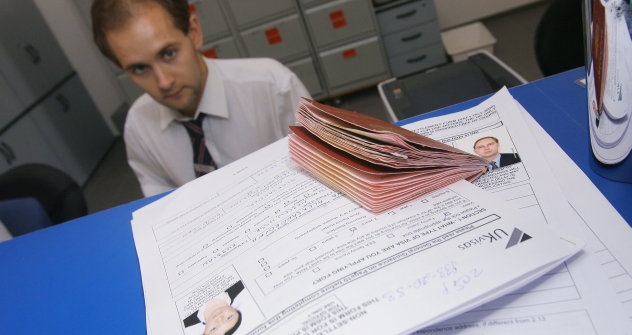 Russia intends to raise the visa issue during the meeting of EU Foreign Ministers in Luxembourg on Oct. 14.Source: RIA Novosti / Ilya Pitalev

According to the Russian Foreign Minister, the reasons for the delay are political rather than technical or administrative.

Moscow believes that the European Union has been putting off the transition to a visa-free travel regime with Russia - a matter that has been under discussion for almost nine years now, Foreign Minister Sergei Lavrov stated.

“I really wouldn't like to go into any detail; I can only say that we feel that the reasons for the delay, on the side of our EU partners, are hardly technical or administrative... We have received
information that the main reason behind it is political,” Lavrov said, speaking to members of the Association of European Businesses on Oct. 8.

According to Lavrov, with the principle of solidarity acknowledged by the EU, granting Russians visa-free travel before Eastern Partnership countries would be politically inadvisable.

“If this is the case, this approach is clearly politically motivated, since it overlooks what Russia has actually done to promote visa-free travel – a measure that is driven exclusively by political expedience,” said the Foreign Minister.

Visa-free travel between Russia and the EU has been a pivotal issue in bilateral relations. Moscow is adamant in its belief that the elimination of visas would open up whole new horizons for bilateral cooperation.

“We earnestly believe that we could achieve this in the very near future, by complying with the exhaustive list of measures required for visa-free travel, as agreed by Moscow and Brussels. In the shorter term, we have drafted a visa liberalization agreement that, among other things, contemplates the possibility of five-year multiple-entry visas for businessmen and representatives of business associations,” Lavrov said.

According to the Foreign Minister, the only moot issue preventing the agreement from being signed is the provision on visa-free travel for official digital passport holders, which is comparable to a  provision included in a similar agreement between the EU and Ukraine.

Earlier, Kommersantnewspaper quoted a source in Brussels as saying that European officials had reason to doubt Russia issued official passports exclusively to those holding appropriate positions. Although Moscow flatly denied the allegation, Kommersant reported that Russia had to make some concessions early in October. Initially, Moscow insisted that visa requirements be abolished for all official passport holders, but authorities finally agreed to exclude the biggest categories –  military and administrative staff of its diplomatic missions.

Apart from these two categories, official international passports are issued to Russian government envoys to international organizations, employees of state corporations, employees of the Central Bank of Russia, administrative and technical staff of the presidential and governmental executive offices, State Duma officials and a number of other public officials, as well as their families. Currently, Russia has 7,500 holders of official passports.

“I hope that they will be see my point and that we will sign this visa liberalization agreement, bringing us a step closer to a prompt transition to visa-free travel by Nov. 1,” Lavrov said.

He also took the opportunity to draw the attention of the business community to the fact that, considering the benefits they would receive from a simplified visa process, they could influence politicians of their respective nations directly. According to Lavrov, business communities are well-positioned to urge their respective governments and parliaments to act in favor of economic rather than political factors.

“I believe that representatives of the business community could initiate discussions with their government in order to share their views on what they would like EU-Russian relations to be in some five, ten or twenty years,” Lavrov said in his address to European businesspersons.

He stressed that Moscow still regarded its relations with the EU as a top priority.

“The European Union is our major economic partner, accounting for over half Russia's foreign trade. Last year, we regained our pre-crisis foreign trade revenue level of nearly $400 billion. EU nations have brought some 80 percent of accumulated foreign investment into the Russian economy. Roughly 40 percent of Russia's gold and foreign exchange reserves are denominated in euros,” said Lavrov.

According to the Minister, Russia and the European Union each possess a unique set of mutually complementary advantages, such as high technology, natural and financial resources, territory, education and qualifications of workers. If combined, these advantages “could provide a powerful source of economic success in the highly competitive current environment, for both the European Union and Russia.”

Furthermore, Lavrov expressed his strong belief that Russia's recent accession to the WTO created the necessary background for economic and trade relationships between Russia and the European Union to rise to a fundamentally different level.