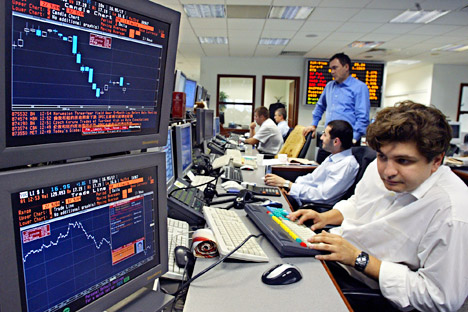 Goldman Sachs and JPMorgan predict that the Russian currency will be strengthened. Source:AP

High oil prices, the easing of monetary policy in Europe and the U.S., in addition to the end of capital flight — these are the three cornerstones of the ruble's newfound status, say Goldman Sachs and JPMorgan analysts. Experts at the two major investment companies expect Russia's currency to strengthen.

The Russian ruble will strengthen, say experts at Goldman Sachs. In the past three months, they have updated their forecast rate against the euro-dollar basket to 34.5 rubles. The semi-annual and annual prognoses are 33.5 and 34 rubles, respectively, against previous forecasts of 35, 34.5 and 34 rubles in relation to the basket. The new figures correspond to a U.S. dollar exchange rate of 31, 29.2 and 28.2 rubles (see box below).

Experts assert that, in the short term, the ruble could prop up oil prices and lend weight to developments in the global economy. The latest easing of monetary policy by the European Central Bank (ECB) and the U.S. Federal Reserve, with interest rates still practically at zero (while the Russian Central Bank is raising them), is making Russian government bonds a more attractive investment than their foreign counterparts.

However, the forecast is only credible at an oil price of $130 per barrel, says chief economist at Alfa Bank, Natalia Orlova. According to forecasts by Goldman Sachs Group Inc., this will be the price of Brent in Q3 2013, while Goldman Sachs expects to see $125 per barrel quarter. Looking further ahead, the ruble could be assisted by Russia's current account surplus: Goldman Sachs predicts that Q4 could see the surplus grow to $32 billion, from $16.6 billion in Q3.

Although recent data point to a slowdown in investment growth and consumption, the bank says that will not become a trend, since real wages are growing almost twice as fast as outlays.

What is a bi-currency basket?

A bi-currency basket is an operational indicator of monetary policy. In this case, it relates to the policy of the Russian Central Bank and reflects the real exchange rate of the ruble against the U.S. dollar and the euro. The bi-currency basket was introduced in 2005, before which the ruble was pegged exclusively to the dollar. When first introduced, the basket consisted of €0.1 and $0.9. The current ratio (€0.45 and $0.55) was established in February 2007, and has remained unchanged since.

Goldman Sachs is not the first foreign bank to predict a strengthening of the ruble. In September, JPMorgan Chase & Co. recommended opening long positions on the ruble, eyeing a rate of 29.5 rubles to the U.S. dollar in the coming months. The arguments of both investment banks look similar: Russia's currency is cheap relative to oil (JPMorgan revised its forecast for Q3 upward from $95 to $109 per barrel, and from $100 to $105 for Q4), interest rates could rise, OFZs (federal loan obligations) are available, and the trade balance is improving.

“The Russian economy really does look in good shape: low debt, plus return on capital; and investment is only just beginning,” said head of transactions at ING Groep N.V., Stanislav Yarushevichyus. However, Goldman Sachs' forecast is, in his view, still too aggressive: a more realistic level would be 29-30 rubles in 2013.

The Russian Central Bank also expects to see a slowdown in capital outflows. It is “quite possible,” said the RCB’s first deputy chairman, Alexei Ulyukayev, in mid-October. Net outflows in the first nine months, according to the RCB, came to $57.9 billion, of which Q3 saw $13.6 billion; the RCB expects the annual figure to hit $65 billion.

There may even be periods of capital influx, adds Orlova. Yet the economist does not consider this a long-term trend: Russia lacks investment opportunities, and money flows are largely determined by the mood of global investors.