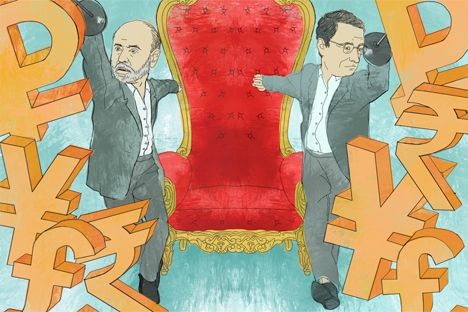 What shift in the world monetary policy will the current economic crisis result in? Russia's experts Nikolay Podguzov of VTB and Sergey Mashagin of Personal Starategies try to figure out the problem.

Read Stanislav Mashagin's opinion on the next page

The world currency balance will shift toward emerging markets

The most recent International Monetary Fund (IMF) data shows that the composition of world foreign exchange reserves has changed only gradually. At the moment, the U.S. dollar retains its place as the leading reserve currency, at around 62 percent of total reserves. The U.S. dollar, however, is on a gradual trend of decline.

The eurozone crisis has slightly dented the amount allocated to the euro, though not by much — euro reserves still stand at just below 25 percent. However, uncertainty surrounding the future of monetary union resulted in a loss of confidence that is reflected in the periodic pressure put on the euro.

This loss of confidence is also evident in the flight of deposits from banks in the “south” to safe havens in the “north.” In going forward, much depends on the ability of eurozone policymakers to resolve the debt and banking crisis, as far as future developments in world currency reserves are concerned.

However, sovereign debt problems are not confined to the eurozone. The U.S. faces a major challenge in its unsustainable fiscal position, which finds the country’s federal debt to GDP ratio at its highest level since 1950. In the aftermath of the U.S. Presidential election in November, economic failure could result in credit rating downgrades for the United States, as well as adverse interest rate volatility and weakness in the U.S. dollar.

In the event of a break-up of the monetary union in the eurozone, the immediate risk facing investors is the introduction of new currencies or, more accurately, the return of national currencies that existed prior to the euro. The situation would hinge on how fragmented the monetary union becomes.

If only Greece exits, then the euro continues and Greece re-introduces the drachma, which would likely see a significant depreciation. However, if Spain and Italy were to exit as well, this would put a question mark over the viability of the euro and lead to it becoming the currency for a northern bloc dominated by Germany. Another scenario involves a German exit, but Germany might not want to be seen as being responsible for destroying the euro “project,” for historical reasons. In addition, it is possible that a new Deutsche mark might appreciate rapidly, damaging German export competitiveness and denting economic growth prospects.

In any case, the international monetary system is evolving toward a multi-polar currency system that reflects changes in the global economy over the last 15-20 years. The center of gravity has shifted from West to East, and now the so-called “emerging” economies are making a significant contribution to global economic growth and world trade. The importance of their currencies will grow as these economies expand. But reserve currency status is a function of not only economic size but also liquidity and transparency in money markets and capital markets. By this scenario, Asian currencies such as the Chinese yuan could easily become important investment and trading currencies in the East.

The role of the Russian ruble in the global economy may increase as well. There are strong pre-conditions in place for the ruble to become a regional reserve currency within next several years. The Russian economy has maintained a moderate but sustainable positive growth rate of 3 to 5 percent since the 2008 economic crisis. Furthermore, Russia’s debt burden is the most conservative amongst G20 countries: only 10 percent debt to GDP ratio. Russian budget policy has also been prudent enough during recent years, with the absence of a budget deficit.

Russia’s balance of payments remains in positive territory, primarily due to a current account surplus. Consequently, Russian reserves have been on a sustainable recovery trend since 2008, and, currently, the Central Bank of Russia (CBR) has the third largest reserves in the world. Russia abandoned capital controls in 2007, and, even during the 2008 economic crash, authorities had no intention of bringing them back.

Russian monetary policy has been recently been moving toward inflation targeting and, currently, the CBR operates under a nearly floating exchange rate regime. As a result, interest rate volatility has been reduced and the CBR is better positioned to keep inflation under control. Inflation in Russian has been brought down from double digits figures to 6.3 percent in 2011 and is forecasted to stay around 7.0 percent this year.

Russian regulators have also been working to improve the local bond market infrastructure. Russia’s local bond market cap amounts to almost $300 billion. By the end of the year, the Central Depositary in Russia will be launched and non-residents will be allowed to open nominal holder accounts. This improvement creates the necessary preconditions for the largest international clearing houses in the world to begin settling Russian local bonds. Hence, the process for ruble-denominated local bonds will be brought in line with best international practice over the next few months.

The rise in the ruble’s standing is a reflection of the general strength of Russia’s investment position, particularly when contrasted with the current challenges facing the eurozone. VTB Capital’s Russia Calling Investment Forum, at which the world’s business leaders, investors and politicians come together to explore investment opportunities, is a great example of Moscow’s growing importance as an international financial center.

Nikolay Podguzov is the head of Fixed Income Research at VTB Capital.

A new balancing act for the world's leading currencies

In the wake of the economic crisis of 2008, malaise of the euro-zone and geopolitical changes in the Arab world, the balance of world currencies established at the close of the 20th century appears set to change.

The balance of currencies has not changed for several decades. The principle share of the market belongs to the U.S. dollar, with the euro (which inherited the shares of the German Deutsche mark and French franc) in second place and the Japanese yen in third place. The Swiss franc and the British pound trail at fourth and fifth place, respectively.

However, over the past decade a couple of the leaders have taken some hard blows.

Confidence in the stability of the dollar was heavily eroded in 2008, which saw the mortgage industry crisis and the bankruptcy of two of the world's most prominent corporations: Lehman Brothers and AIG. The euro, which had been marked with high hopes, can hardly be considered a safe haven now: the economies of Greece, Portugal and Spain have already proved unable to support such a weighty currency.

Meanwhile, several hitherto relatively minor currencies have staked their claim to a share of world markets. The most serious overtures have come from the Chinese yuan, but accounts in the currencies of the other BRICS countries cannot be disregarded – particularly the Indian rupee, the Russian ruble and the Brazilian real.

Foreign exchange investors, for the past several years, have talked nonstop about what the configuration of the world's currencies may look like in the midterm (in the next five years). Nonetheless, despite stern and constant predictions of the death of the dollar or the hopelessness of the euro, the actual balance rates remain unaltered. That is to say – beyond mere chatter – investors are not rushing to switch their dollar portfolios into another currency.

Turbulent times, such as those at present, give rise to much speculation about the reliability of one currency over another; but the overriding strategy remains the calculated and cautious approach of keeping funds in trusted currencies such as the dollar, the euro and the yen.

Market players assess currencies on the basis of three main criteria: influence, stability, and future outlook. The most influential, as we have mentioned earlier, are the U.S. dollar, the euro, the Japanese yen, the Swiss franc, and the British pound. Currently, the most stable currencies (in descending order) are the Japanese yen, the Hong Kong dollar, the Chinese yuan, the U.S. dollar, the Singapore dollar, the Swiss franc, the Russian ruble, the South Korean won, the Indian rupee, and the Israeli New Shekel.

Regarding future outlook, the “small” currencies of countries that are less dependent upon global trends and determine their own monetary policy without looking over their shoulders at others rank first and foremost. These include currencies such as the Swedish krona, the Swiss franc, the Canadian dollar, the Hong Kong dollar, Australian and New Zealand dollars, and others.

The first two categories – influence and stability - provide a list of the most liquid and trusted currencies: the yen, the yuan, the dollar and the franc. These are favored currencies in which investors would place funds over the midterm.

However, if all three categories are combined, the only currency to meet all of these criteria is the franc. Even so, this is hardly a shining substitute for the dollar. Dealing in Swiss francs is extremely limited by the quantities the Swiss economy make available; moreover, the current exchange rate of the franc is now artificially pegged to the euro. The Swiss government claims that this is a temporary measure, but the franc makes an excellent replacement for any investment portfolio in euros.

The Russian ruble deserves separate consideration, since it is surrounded by much controversy and opinions on it vary extensively. Several investment institutions and banks (particularly in the state sector) recommend buying the ruble, yet it does not seem that the ruble is capable of generating exceptional results without being linked to the markets. The ruble is firmly tied to global markets, as a result of raw materials trade, to the U.S. dollar.

The ruble can win in two scenarios: if world markets grow, or if the dollar, euro or other global currencies drop. No one believes in the first scenario. As for the second, experience shows that the Russian government would not allow the ruble to devalue to mirror the U.S. dollar or the euro.

The most crucial thing for the Russian government today – in view of the weakness of financial markets and the inability to institute a fully-fledged program of federal borrowing – is to reduce the actual value of the ruble. This is the government’s trump card for addressing the federal budget deficits and the pension fund shortages. What should be done with the ruble?  It should be sold, spent, and used for borrowing.

The fact that the greatest weight in global financial systems is commanded by the U.S. dollar should not be ignored; American investments are found in almost every country across the globe, and the United States is the world's largest purchaser of goods and services. Whatever happens, this is a currency that will be boasting its dominance in the balance of world currencies for many years to come.

Similarly, due to China's enormous influence on the world economy, China's currency will remain strong in relation to the market and alongside the U.S dollar.

In uncertain times, investors will favor the strongest and most solvent currencies. This means that, these days, a good currency portfolio must include (in order of yield) the Swiss franc, the U.S. dollar, and the Chinese yuan.

Stanislav Mashagin is a partner at the management firm Personal Strategies.