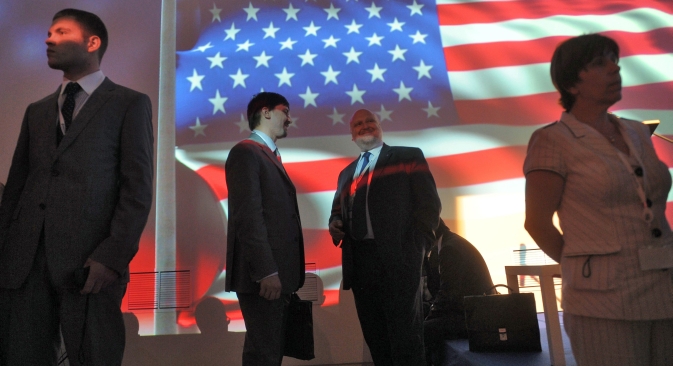 In the wake of the U.S. presidential campaign Moscow and Washingtont seek to strengthen U.S.-Russian economic ties. Source: Kommersant

The 20th Annual meeting of the US-Russia Business Council (USRBC)—a Washington-based trade association of 230 American companies - was held here recently in Atlanta and the business implication of Russia membership in the World Trade Organization was high on the agenda.

The USRBC has long been a booster of closer U.S.-Russia economic ties, and the group has lobbied the U.S. Congress to repeal the discriminatory Jackson-Vanik amendment, a measure that prevents Russia from having permanent, normal trade relations (PNTR) status with the United States.

Otis elevates its business in Russia

Despite Russia’s entry into the WTO last summer, the lack of PNTR status significantly undercuts the development of commercial ties between the two countries and prevents some American business from entering the Russian market.

The conference in Atlanta, home to one of the biggest American investors in Russia, the Coca-Cola Co., brought together more than 200 business representatives with diplomats, financial analysts as well as officials with both presidential administrations.

There was some continuing optimism at the conference that Jackson-Vanik will be repealed following the U.S. presidential and congressional elections this November. Deputy National Security adviser Michael Froman, a senior adviser to President Barack Obama, said that it may happen during Congress’s “lame duck" session, before a new Congress is sworn in January.

Russia's Ambassador to the U.S. Sergei Kislyak said in his remarks that “Russia’s investment potential is underestimated" and mentioned that the share of U.S. exports to Russia, despite the recent growth of trade turnover between the two countries, still accounts for less than 1 percent of the total of U.S. foreign trade.

U.S.-Russia Business Council president and CEO Edward Verona said in an interview that while “we may never reach the trade level that Russia has with some of its neighbors…our countries can definitely do better than now. And as Russia diversifies its economy and modernizes it, the doubling of American exports to Russia to at least 2 percent is doable.”

He said the council has to work with American companies to enable them to take advantage of Russia’s membership in the WTO and its increasing integration into the global economy.

“There is strong appreciation in Russia for American brands and for the technologies companies are bringing in,” he said. “Equally we want to see more Russian companies coming over to United States.”

According to Alexei Kudrin, Russia’s former Minister of Finance, a bilateral U.S.-Russia investment treaty is needed as soon as possible. Kudrin told the  mostly American audience that "Russia is interested in the outcome of the U.S. presidential election in a way that would preserve the potential for development in the business ties between the two countries."

The agenda of the USRBC conference consisted of panel discussions related to the general outlook in U.S.-Russia relations; business opportunities in the Russian Far East; foreign investment in Russia’s booming energy sector; the agricultural sector’s future after the country's accession to the WTO; the state of intellectual property rights; and the future economic policy of the Russian government.

On the latter issue, a key area of interest for foreign investors, Sergey Belyakov, Russia’s Deputy Minister of Economic Development, said the government remains committed to large scale ​​privatization, and is also focused on substantively improving the investment climate in the country.  Belyakov pointed to the recent World Bank report "Doing Business - 2013," which found that the business climate in Russia for small- and medium-sized business had improved over last year by six points.

Anders Aslund, a senior fellow at the Washington Institute for International Economics, said the two main drivers of economic growth in Russia were human capital and energy. But the state capitalism and inefficient state-controlled energy companies were a drag on the economy, he added.

In an interview at the end of the first day of the conference, former U.S. Ambassador to Russia John Berlye said “there is a lot of unrealized hi-technology cooperation between two countries.”

During his time in Russia, U.S. Ambassador to Russia John Beyrle spent at least one third of his time promoting business.

"We have been advising American companies on where are opportunities are in Russia for a long time,” he said. “To me it’s very clear that one should think about several areas that former Russian President Dmitri Medvedev has identified as sectors in which Russia wants to have a competitive advantage like space, energy and pharmaceuticals, etc. I think those are the areas where there is the biggest opportunity for American companies.”