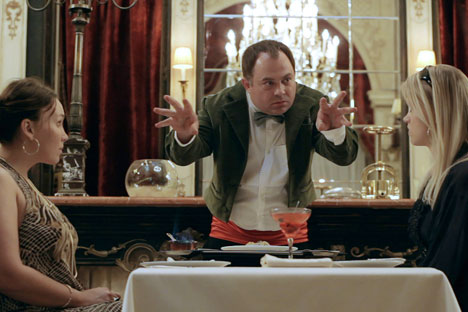 Screenshot of the filmTill Night Do Us Part. Source: Press Photo.

London is preparing to the Russian Film Festival which will take place on Nov. 2-11.

RBTH: Russian films have recently been more prominent at international film festivals – in Cannes, Venice, Berlin and others. What has prompted this success?

Their success has recently been recognised and supported by the Russian government. The Russian Cinema Fund was created in 2009 to support Russian filmmakers at home as well as in the international arena as part of a national programme to develop the Russian film industry. President Vladimir Putin personally leads the Council for the Development of Russian cinematography.

RBTH: How does the Cinema Fund help Russian film-makers?

S.A.: The most recent example is the Red Square Screenings that took place in Moscow on October 15-20. The Cinema Fund invited 120 international film professionals, such as film distributors, marketers and agents to see screenings of the best Russian films of recent years. About 50 films were shown over five days at the GUM Cinema on Red Square. It will become an annual event.

Both the Cinema Fund and the Russian Ministry of Culture work abroad. In September, at the Venice International Film Festival, the Cinema Fund presented premieres of three Russian films – Kirill Serebrennikov’s Betrayal, Alexey Balabanov’s Me Too and Lyubov Arkus’sAnton’s Right Here – and it helped producers to work with the press and international distributors.

More new Russian films will be presented at the Rome International Film Festival in November, including Aleksey Fedorchenko’s The Sky Wives of the Meadow Mari and Ivan Vyrypaev’s The Dance of Delhi. These will be world premieres.

RBTH: How strong are industry links between Russia and Britain?

But I feel that to understand modern Russia you really need to see films made by the new generation of Russian film-makers – so, do come to our film festival.

We choose films that have won awards that would be interesting for British audiences with English subtitles.

Russia and Britain both have great cinematic traditions and great opportunities – in terms of film locations, modern film studios and, of course, stories.

For our British audience!

Be the first to answer correctly the question below in the comment section of this article and win 2 tickets to the Opening Night and After-Party of the 6th London Russian Film Festival on Nov. 2:

What famous location in Moscow is the centre of action in "Till Night Do Us Part," the opening film of the festival?