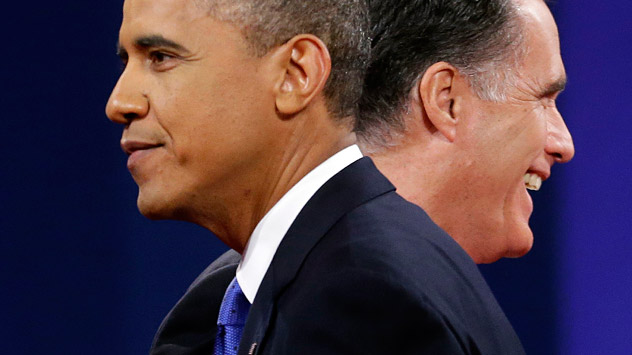 Republican presidential candidate, former Massachusetts Gov. Mitt Romney and President Barack Obama walk past each other on stage at the end of the last debate at Lynn University, Monday, Oct. 22, 2012, in Boca Raton, Fla. Source: AP

Russian Democrats living in Alaska are going against the Republican majority.

The slick presidential campaign merchandise that can be seen on garden fences and car bumpers across the rest of the United States is nowhere to be found in Alaska. The state has almost no say in the presidential race. This is a direct consequence of the two-stage electoral system, in which each state’s contribution to a candidate’s score is not a percentage of voters but a number of electors – the fewer electors each territory has, the less campaign advertising can be seen there.

The indifferent attitude of federal candidates to their northernmost supporters plays into the hands of local politicians. In residential areas of Anchorage it is difficult to find any yard that is not decorated with a placard displaying the name of the homeowner’s favorite candidate for State Senator, or Chief Justice of Alaska, or some other official (all of whom are traditionally elected on the same day as the president in the United States).

Even the University of Alaska is electing a new student government body on Nov. 6 – a group of students that shares responsibility with the “adult” administration for education, leisure and the university budget.

“Oh, I don’t really know, but it’s all very, very serious,” said Tanya from Vladivostok, finding it difficult to explain the role of the new student organization as she took her turn manning the university’s information stand. “Not as serious as the presidential elections, but still important.”

Tanya has the classic “Hollywood smile,” the ability to pronounce the word “and”with an American accent, a nearly complete course in accounting behind her, an American husband (“Well, not quite an American, but he’s already been granted citizenship”) and a Russian passport.

“It’s a shame, it’s a real shame, that I don’t have citizenship yet. After all, it’s very important to have a say in the future of the country you live in. And I’m planning to stay here. Who would I vote for? Wow, that’s a difficult question. I still haven’t got my head round these elections,” said Tanya, hiding a sheet of paper printed with red stars under the stand. These are what Democrats stick on their windows at home. Republicans prefer blue stars, since they see the red ones as a symbol of communism.

“It’s because Americans don’t really know what communism is, but they’ve been afraid of it since the days of the Cold War. You can call anything you like communism here, and everyone will start being very wary of it,” said long-time American resident Fyodor Solovyov. “Romney is relying on the poorest and most ignorant people at the bottom of society – that’s clear from his rhetoric. But, if he wins, he’ll be president for only the richest 5 percent of Americans. They’re the only ones who will benefit.”

Solovyov has lived in America for 22 years. He has many professions and hobbies – he is a journalist, the founder of the Anchorage Russian Club, a notary, the leader of a Russian choir and the owner of a company that is designing a railway line from Moscow to Mexico City (via China, the Bering Strait, Alaska and Canada).

Taxi drivers ask for twice the tip to take passengers to the area of Anchorage where Fyodor lives with his wife Katya and their children. The houses here are so expensive that even a chance visitor must definitely be rich. At the same time, Fyodor considers himself part of the middle class. And, as a Democrat, he is expecting help from Obama.

“The main difference between the candidates is their views on medical insurance. Obama believes everyone should have it, and Romney calls him a ‘socialist’ for that – even though in his own state of Massachusetts, during his term as governor, he made it compulsory for everyone to have insurance,” said Katya Solovyova, revealing the main intrigue of these elections.

Her husband does not have insurance. The last time he went to the doctor was several years ago, when he was travelling to Russia. His neighbors in the area fly to Costa Rica, Mexico and Thailand for treatment. Even the people who live in expensive areas cannot afford medical treatment at home.

This is why almost all the Russians in Anchorage are Democrats. The exceptions are extremely specific, even exotic. Thus, the most active Romney supporter in the whole of Russian Alaska – Arina – is married to a Mormon. He is a member of the same religious body to which Romney himself belongs – a religious body whose teachings speak of Christ visiting America and preaching to the Native Americans.

Still, the Mormons are in a minority among ordinary Americans, not to mention Russians. So, even though Amanda Murphy lives in one of the most Republican states, the university teacher of Russian language and former Muscovite answers a question about the chances of a victory for Democrats with a partial Russian translation of Obama’s first presidential campaign slogan: “Da, we can!”

This is an abridged version of the original Russian language article, which is available in the Izvestia newspaper.