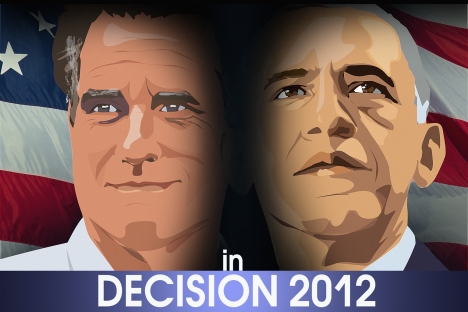 Drawing by Alena Repkina. Click on the image to enlarge

President Vladimir Putin has realized that the American political system has no one better to offer than the liberal Barack Obama. Consequently, and quite reasonably, Putin has decided that he should back Obama on issues on which he can afford to back him.

Of course, if Romney wins, then Russia will deal with Romney. Still, it is better to do business with someone who says he will be ready, if he wins, to meet Russia halfway on the issue of missile defense than to deal with someone who considers Russia to be America’s number one geopolitical foe.

To paraphrase the late Neil Armstrong, it can be said that this new understanding is a small step for one leader and one giant leap for the whole of Russia.

Four years ago, when Obama was running against Republican Senator John McCain, many people in Russia who followed the electoral race in the U.S. favored McCain, for four reasons.

Some hoped that McCain, coming into the White House, would immediately challenge the Russian government, finance the opposition, and demand that Putin and Medvedev surrender to whatever group of people was hastily put together with the aid of this money.

Others hoped that thunderous threats and overtly aggressive intentions from the U.S. would force the Russian ruling class to unite and proceed with the genuine modernization of the country’s armed forces and national economy.

Still others continued to believe the old myth about the outwardly ferocious but secretly peace-loving Republicans and the soft but deceitfully treacherous Democrats. Lastly, there were others who simply appreciated rudeness, ferocity and brutality.

Now a welcome change seems to have taken place in the minds of Russian elites, in both the ruling and opposition parties. The fact that Russia is hardly ready for a head-on confrontation with the West has hit home.

Russian experts, who like to recall Nixon and Reagan, are beginning to realize that the time of these legendary presidents is long gone. We are dealing with a different kind of Republican and a different kind of Democrat. With the exception of Obama, no other true realists are visible on the political scene.

This is good news for all those who are actually guided by Russia’s national interests. During his first term, President Obama tried not to antagonize Russia as much as possible. Although, he also steered clear of agitating the big banks and failed to put the Federal Reserve System in order. All those who had hoped that the state would return to the economy and implement new, ambitious investment programs never saw Obama launch another New Deal. Nor has the American leader and Nobel Peace Prize awardee become an exemplary champion of international law.

Russia has no reason to adore the 44th White House incumbent, but the country should probably treat American leaders as reliable partners rather than idols, anyway. If Obama does not live up to the status of idol, then he certainly remains a preferable partner for Russia.

The article is abridged and first published in the Izvestia newspaper.