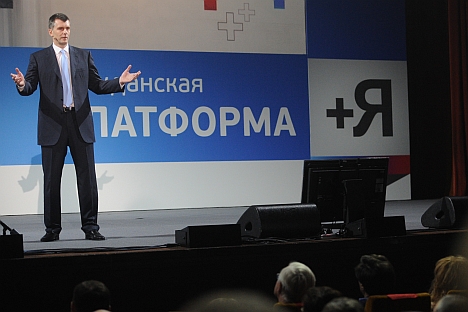 Billionaire Mikhail Prokhorov considers himself a “third force in Russian politics.” The former presidential candidate made this statement at the founding congress of the Civic Platform party held on Saturday.

Prokhorov sees his party as unique. “The era of autocratic parties is over. We’re at the crossroads again; that’s why we decided to offer a new format that no one has ever used before,” he said at the founding congress. In his view, what makes Civic Platform unique is that it will not be led by a single leader, but by a civilian committee of 11 people that includes non-partisan civil society activists. Congress delegates voted unanimously for this proposed structure.

Prokhorov stressed that his party is geared toward those who are dissatisfied with the status quo, but it is not inclined toward supporting street protest leaders such as Alexei Navalny.

“We love dividing society into reds and whites – some are with the Kremlin, while others are with the opposition’s Coordination Council, and there’s no third option. I want to have the third opinion; I want both the Kremlin and the Coordination Council to feel comfortable in our country. I’m therefore the third force, if you like,” said the businessman, noting that he is prepared to hold talks regarding the forming of alliances with all parties except the nationalists.

At the conference, some of the specific positions of Mikhail Prokhorov’s new party were discussed.

One of the key issues was the administrative and territorial division of Russia. Prokhorov called for an end to the division of Russia into “national districts” and republics, which is a move that would require the Constitution to be amended. According to him, Russia has created internal borders with its own hands, “national ghettos, where the local corrupt authorities oppress and rob our people, with all nationalities affected.”

“It’s surely better to be honest and say that the Stalinist-Leninist system is no longer effective in the 21st century,” said Prokhorov.

The leader of the Civic Platform party also touched on the issue of migration. According to him, migrants should be highly skilled workers, and a transparent system to track migrant numbers and teach newcomers the Russian language and culture needs to be created.

According to the analyst Gleb Pavlovsky, Prokhorov has quite coherently outlined his party’s main idea. “This is clearly a party geared towards the cities, and, judging by the rather scathing remarks made about the republics, the party is not looking to lure voters in the national republics. It has taken a very tough stance on irregular migration and even the current division of the ethnic republics,” said Pavlovsky on Kommersant FM radio.

Political analysts and the expert community are divided concerning the prospects of Prokhorov’s new party.

Igor Yurgens, a member of the Civic Initiatives Committee, does not rule out the possibility of the Civic Platform party becoming a platform for consolidating democratic forces.

“In recent years we’ve seen the democrats at loggerheads. Then you appeared, and we’re putting a lot of hope in you; and I think that people like Prokhorov and [Alexei] Kudrin (former Finance Minister and leader of the Civic Initiatives Committee) can be instrumental in this matter,” Yurgens said.

In stark contrast, political strategist Konstantin Kalachev believes that Civic Platform has no chance of becoming an influential party. “Prokhorov behaves inconsistently: one moment he’s creating a new type of party, the next he’s rejecting the idea. This party is just a flash in the pan, a political game,” said Kalachev.

This article is based on materials from RBC Daily and Kommersant FM.