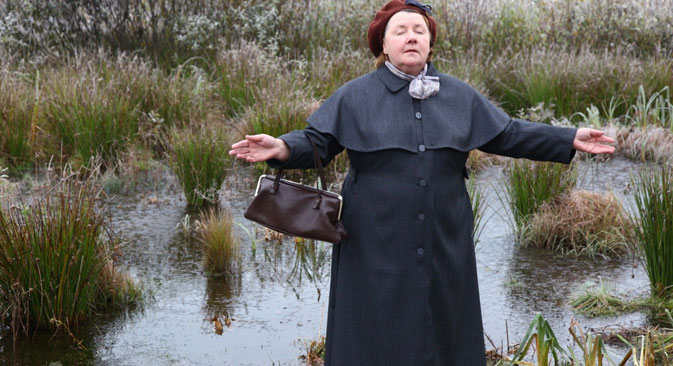 "Short stories" is the film by award-winning director Mikhail Sega. It is divided into four separate stories. Source: Kinopoisk.ru.

Today the 6th Russian Film Festival in London will open its doors. The most outstanding Russian films of the past year will be screened, including works by both new and established film-makers.

The film festival will open with Boris Khlebnikov’s Poka noch ne razluchit which roughly translates as “Till night do us part”, a cinematic examination of the morals of Moscow’s elite as they frequent the exclusive 24-hour Cafe Pushkin.

Khlebnikov’s trademark melancholy humour works very well in this low-budget film, which was financed exclusively by crowdfunding; the cast and crew will receive royalties based on future profits. Many Moscow celebrities play themselves: frustrated wives of business tycoons, strung-out pop idols and gossip columnists. The story that unfolds behind the scenes in the kitchen among the waiters, cooks and immigrant workers is more down to earth.

Poka noch ne razluchit can be seen as a global statement on the condition of Russian society on the eve of the anti-Putin protests on Bolotnaya Square. Its social realism puts it in a different category and style to the films that first appeared several years ago which were stark and even cruel; they were seen as a new wave of non-conformist movies.

The older “new wave” tradition can still be seen in some new films, including Aleksei Mizgiryov’s Konvoy, a movie that gives centre stage to law enforcement. Mizgiryov gives meticulous, almost loving, portraits of powerful people who are essentially constrained by the system, a kind of social typology.

Within this framework, the film eloquently depicts the greedy and corrupt face of Russian power structures. The central character challenges corruption and degradation head-on. He is in many ways an idealist who knows no fear and feels no pain.

The film tells the story of an army captain sent on an assignment to Moscow, accompanied by a sergeant serving under contract. They soon find themselves trying to escort a deserter back to his unit. Moral tension arises between the three main characters, who epitomise three models of survival in hell: the stoic, the clown and the conformist. Hell is present-day Moscow, teeming with cheap foreign labourers, prostitutes, gangsters and cops, in short, a huge torture chamber in which scenes of graphic violence are portrayed.

The second no-holds-barred picture is called Zhit (“Living”). Director Vasily Sigarev and actress Yana Troyanova, who both star in the film and co-wrote the screenplay, explore the dark area between life and death in which the residents of a tiny provincial town find themselves. What happens to them fits into three very different but interconnected stories that are reminiscent, in terms of genre, of urban crime and horror films.

These two dark and tragic films are not typical of the more recent Russian films. Most of them teeter on the border between arthouse movies and mainstream blockbusters, leaning towards the latter. The most successful efforts of this kind are Avdotya Smirnova’s Kokoko (“Cococo”) and Mikhail Segal’s Rasskazy (“Short Stories”).

But perhaps the festival’s most revealing film is Ya budu ryadom (“I’ll be by your Side”) by Pavel Ruminov, an obviously gifted director with a career that has been somewhat checkered. He has long displayed a taste for designer, hi-tech directing and has at last got a chance to demonstrate his talent.

The drama, about a young mother dying from a brain tumour and looking for adoptive parents for her beloved son, has been cut from a TV show that Ruminov shot. It uses the latest technology: a Von Trier-style hand-held camera that makes the images look shaky, giving a documentary-style feel. It also benefits from Lynch-style suspense and a superb performance by Maria Shalayeva, for whom the phrase “death becomes her” is more than apt.

Having started as a non-conformist movement, the “new wave” has over the past 10 years become somewhat tamer and closer to reality. Boris Khlebnikov, a recognised leader of this generation, aptly described the trend in film-making as “the new quiet ones”.