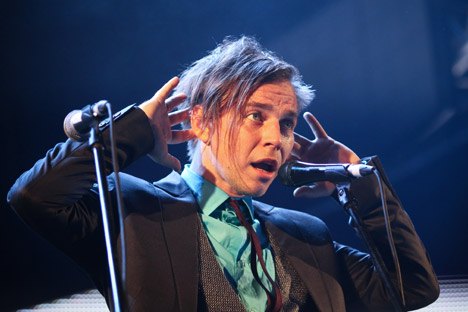 “We are Mumiy Troll. We come from the Pacific, in the Far East of Russia, from a city called Vladivostok – another live music capital.” Source: ITAR-TASS.

One of Russia’s most popular bands, Mumiy Troll braved Hurricane Sandy on the East Coast to make it to the last stop on their U.S. tour: Austin, Texas – Live Music Capital of the World.

On Nov. 2, the 3-day FunFunFun music festival kicked off in Austin, the city that has more music venues per capita than any other in the United States. But while Nov. 2 was only the beginning for FunFunFun festival-goers, it was the end of the line for the U.S. leg of Mumiy Troll’s ongoing international tour. The Russian band’s “East Coast Promo Tour” for their latest album (entitled “Vladivostok”) was a brief whirlwind, with stops in only five cities: New York City, Washington, D.C., Atlanta, Miami and Austin.

Austin was a peculiarity on the band’s tour route for two reasons: it was the only city on the list that is not home to or in the immediate vicinity of large populations of Russian-born Americans, and it was the only city in which the band was not headlining. While playing in front of a crowd that had, by-and-large, neither come mainly to see Mumiy Troll nor been familiar with the band’s Russian-language hits, lead singer Ilya Lagutenko quickly acquainted the audience at The Parish venue in with the band’s origins.

“Privyet, Austin!” said Lagutenko, greeting the crowd in Russian first, before continuing on in well-practiced English. “We are Mumiy Troll. We come from the Pacific, in the Far East of Russia, from a city called Vladivostok – another live music capital” he said.

The band, expressly wanting to take on a wider audience of English speakers (not just Russian-Americans) with this U.S. tour, opened the show in Austin with three tracks from their English-language album: “Hey Tovarish,” “Lucky Bride,” and “Love Contraband.”

“This is a song about what we snuck into Texas with us – nothing but love,” Lagutenko said of the third track, winking at the audience. While this drew genuine laughs and smiles from those in attendance, the crowd perhaps grew most lively in response to some of the Russian-language hits the band played later in the set – their songs “Vladivostok 2000” and “Medvedista,” with their fast-paced rhythms and catchy choruses (even for those who did not understand the words), were particularly well-received by those who were eager to dance.

The crowd at The Parish was itself a diverse mix of spectators: many had wandered in just to continue enjoying live music after the festival’s outdoor stages had closed for the night. Still others had come to see two headlining Japanese bands at The Parish venue – Peelander Z and Electric Eel Shock. But there were a handful of Russian-speaking Mumiy Troll fans in attendance, nonetheless. They were easy to spot, because nearly all of them were wearing t-shirts with one of the band’s signature patterns: stripes.

“I’m from Moscow, I’ve been listening to these guys since I was 11,” said one Russian-speaking fan after the show, also sporting an official, striped Mumiy Troll t-shirt. “We already took pictures with the band before the show; they were here early, setting up.”

Lagutenko and bassist Eugene Zvidionny were also wearing stripes onstage, calling to mind the sailors and naval history of their hometown of Vladivostok. But the band brought another symbol of the Russian Far East with them, as well: the Amur Tiger (also known as the Siberian Tiger). Lagutenko masqueraded around the stage in a flamboyant orange jacket, which was complete with black tiger stripes, coattails, and tiger ears on the hood; the band’s drummer, Oleg Pungin, also wore a shirt with a tiger’s head printed on the center. These were not, however, relics of the recent Halloween holiday or mere fashion statements.

In a recent interview with the German broadcaster Deutsche Welle (DW), Lagutenko spoke about his efforts as an activist in the campaign to save the declining populations of the Siberian Tiger and the critically endangered Amur Leopard.

As the band’s set wound down, a few Russian-speaking girls rushed to take pictures at the front of the stage, hoping to capture Lagutenko in the background of their photos. Once offstage, the band was in somewhat of a rush to leave the venue. “We are very tired,” said Zvidionny, as the crew packed up their equipment. “We didn’t get into Austin until 5:30 this morning.” Lagutenko had earlier explained onstage that the band had flown 13 hours from Russia to the U.S., via China and Japan.

The band made no mention, however, of Hurricane Sandy, which had grounded planes out of New York and forced a cancellation of their show in Washington, D.C. earlier in the week. “We [definitely] don't want to cancel the D.C. show. Three of us went there by car. Two of us still waiting for a plane... The most annoying thing is that we’re going to be in D.C. anyway, and we’ll probably be there around 11 pm,” the band wrote on their Twitter page, moments before and after the popular D.C. venue The Black Cat cancelled the 10:30 p.m. show.

Despite their exhaustion, band members happily stuck around for a while and talked to the Russian-speaking fans who had lined up to meet them after the show in Austin. “Spasibo bolshoe,” Lagutenko had said, closing the show and thanking the crowd in Russian. “We’ll see you next time!”

The band may return to the city to play Austin’s annual South by Southwest Festival (SXSW) in the future, as they did in 2010. For now, Mumiy Troll is headed back to Europe for November, to play a long list of venues in Great Britain, Germany and Switzerland. According to the band’s Twitter page, Mumiy Troll is also preparing to return to their hometown on February 1, 2013, for a much-anticipated and comically named “Huge Summary Report Home Concert” in Vladivostok.