The Golden Horn of the east 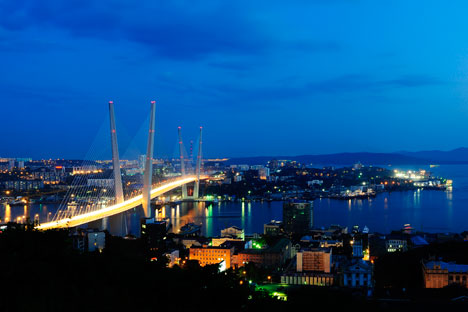 The gradual transformation of Vladivostok has reshaped the now vibrant city by the bay as the 'Soviet San Francisco'. Source: ITAR-TASS.

Located in Russia's far east, Vladivostok is one of the country's most diverse cities in terms of population, cuisine and architecture.

The dark blue waves in Golden Horn Bay turn red as the light slowly creeps along the shoreline, gradually illuminating the houses, the little cars of the funicular railway and the gently sloping tops of the hills that surround Vladivostok. This Pacific port city is one of the first in Russia to greet the dawn.

When Soviet Premier Nikita Khrushchev visited Vladivostok in 1959 after a trip to the United States, he declared that the then-closed city would be 'our Soviet San Francisco'. The phrase stuck, even though the transformation from dreary Soviet port into a gleaming city-by-the-bay took far longer than Khrushchev envisioned. In some ways, it has just been completed; as part of the preparations for September's Asia-Pacific Economic Cooperation Summit, the city finally got a bridge worthy of comparison with San Francisco's Golden Gate.

How to get there
Korean Air and Air China fly from Sydney or Melbourne to Vladivostok, with stopovers. Flights average $1700.

Where to stay
Versal (10 Svetlanskaya Ulitsa, versailles.vl.ru) is located in a historic building on Vladivostok's main street. Prices start at 5000 rubles ($165) a night for a single.

Vladivostok, located on the north-west corner of the Sea of Japan, was founded in 1860 as a military post, and the city's importance as the home of the Pacific Fleet meant that the port was closed to commercial traffic for most of the 20th century.  Now, however, it is a big source of business for this city of nearly 600,000.

The population has been steadily declining, however, and not just because of Russia's demographic crisis.  Living in — and even visiting — Vladivostok has its challenges. Summer lasts just three months — June, July and August — and even these can be spoiled by monsoon rains and temperatures averaging above 30 degrees. In winter, the temperature varies from minus 10 to minus 30, and it’s extremely difficult even for a native to walk through the icy wind.

The city makes up for these inconveniences with amazing views over the varied landscape, available from almost every rooftop. The most popular place to see the city, however, is the viewing platform by the funicular railway on Orlinaya Hill. The Vladivostok funicular was created at the initiative of Khrushchev himself, in 1962. It is 183 metres long, a distance that the tramcars cover in about two minutes. Alongside the funicular runs a stairway of almost 400 steps.

Other symbols of the Soviet era are also preserved in the city — from the names of the local districts (Leninsky, for Vladimir Lenin; Frunzensky, for Mikhail Frunze, a hero of the Russian Revolution; and Pervomaysky, for May 1, International Workers' Day) to old warships and numerous monuments to Lenin and other leaders of the proletariat.

These Soviet place names combined with a number of remaining pre-revolutionary buildings, the 21st century bridges, and right-hand-drive vehicles mixed into the left-hand-drive traffic create an unusual colour that it’s impossible to find in any other Russian city.

Residents of the European part of Russia consider Vladivostok the end of the country, but natives of Vladivostok see the city as the beginning — after all, the sun rises in the east. When construction began on the Trans-Siberian Railway, the foundation was laid in Vladivostok. According to a plaque at the city's railway station, the distance from Moscow to Vladivostok via the Trans-Siberian Railway is 9288 kilometres. Paradoxically, the equivalent plaque at the Yaroslavsky station in Moscow has a different figure – 9298 kilometres. Somewhere along the line, 10 kilometres were lost.

A jumble of eras 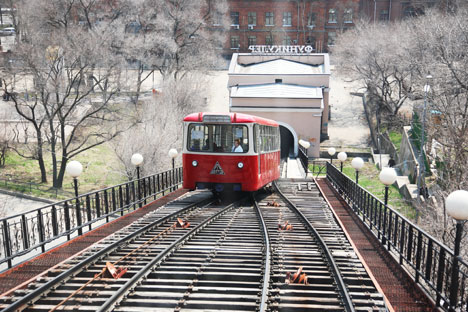 The funicular is one of the best ways to see Vladivostok. Source: Lori / Legion Media.

Walking through Vladivostok is like being trapped in a film about time-travel. The city centre, full of steel-and-glass office buildings, has long since yielded to the new millennium, while the outskirts of the city are full of the apartment towers common in the 1990s. In the low-lying areas between the hills are districts made up of shorter, more elegant buildings from the early 20th century.

One of Vladivostok's most iconic districts is called Millionka. It is a collection of quaint, run-down red-brick houses in the very centre of the city. The buildings themselves feature arches, balconies and complex latticework while the streets of the district form a confusing labyrinth that calls visitors to explore.

Why Russia and Australia can forge a solid partnership

Various explanations are offered for the origins of the name Millionka. According to one, the Millionka was first named after a building at 3/8 Semyonovskaya Street that served as a dormitory for several thousand Chinese workers. According to another, the residents of these run-down houses were called “millionaires” because of their poverty.

At the beginning of the 20th century, the district was known for its brothels, gambling houses and opium dens and was mainly populated by smugglers, counterfeiters and other members of the underworld. In the mid-1930s, the area was cleaned out in a special operation of the secret police and today it is popular with artists.

Since the mid-1980s, one of Vladivostok's busiest districts is Zelyony Ugol, the country’s biggest market for used Japanese cars. The cars, which are imported from Japan, are the reason right-hand drive cars are so common on the streets of Vladivostok. Zelyony Ugol is situated to the north of Golden Horn Bay, which is located more or less in the centre of the city. This crescent-shaped body of water was named in honour of the bay of the same name in Istanbul, because of its visual similarity. The channel that separates Vladivostok from Russky Island, just off the mainland, is known as the Eastern Bosphorus.

The call of the sea

In Vladivostok everything that is not directly connected with the sea is still influenced by its presence. Some of the city's most popular sites include the oceanarium, the marine conservation area, the S-56 submarine museum on the Korabelnaya embankment and the Krasny Vympel memorial ship.

The Vladivostok Fortress is also an important tourist site. Begun in 1889 as a base for Russia's Pacific Fleet and to defend the Russian Empire's new lands in the Far East, the Vladivostok Fortress is considered one of the world's last major sea fortresses to be constructed. The main site was supplemented by small batteries and forts throughout the city. The fortress was upgraded during the Russo-Japanese War and again during the Russian Revolution. In the Soviet era, a system of bunkers and underground tunnels were built between the fortress and the city centre so that the Pacific Fleet command and senior officials could be evacuated by sea. In 1996, a museum of the Vladivostok Fortress was opened at the Bezymyannaya Battery in the city centre.

But in Vladivostok, even the military installations call back the sea. Since 1970, a ship's cannon mounted on Tigrovaya Hill, fires a single shot every day at noon.