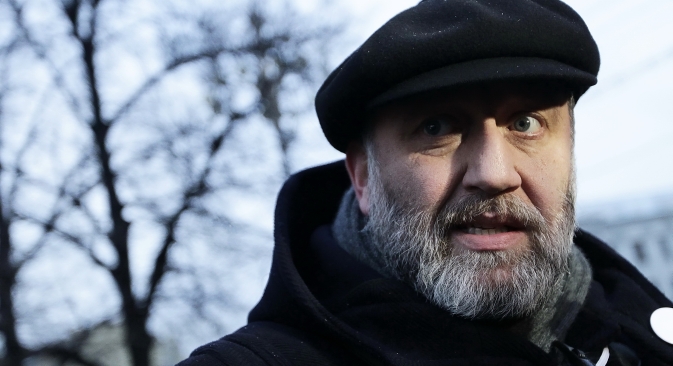 This December, the Russian opposition’s Coordinating Council plans to hold a large-scale event to mark the anniversary of last year’s protests.

The letter suggested that an agenda be formulated for December so that activities can begin as soon as possible. Some of the issues on the proposed agenda are: whether to fix the date of the event on Dec. 8 or Dec. 9, the latter of which is St. George’s Day; and whether or not the format of the event should be rallies and speeches or a demonstration with a submission of signatures, as Parkhomenko proposes.

The initiators and organizers were also instructed to have the Coordinating Council officially registered, and a group of petitioners will file an application with the Moscow Town Hall.

“The objective of the demonstration is to collect 100,000 votes to support simple and understandable political demands. This is the political initiative of 100,000 people that Putin said is needed in order to be considered a legislative initiative by the State Duma,” Parkhomenko wrote.

Each participant in the St. George’s Day event has been advised to come with a signed printout of the initiative and to hand it over to volunteers when joining the demonstration. At the very least, the event organizers want to ensure that the people have the power to choose the government or even change it. This means re-introducing four-year terms for the president and the State Duma and abolishing Article 5 of the Federal Law on Referendums, which bans bringing any politically significant issues up for vote.

The event also aims to meet the demand of the public, which wants the opposition to “pass from words to deeds.”

Parkhomenko notes that the final decision concerning the date for the event will be made by the Coordinating Council during its next meeting on Nov. 24; interestingly, the members of the Council are supposed to vote on all decisions in person. Summing up his thoughts about the December event, Parkhomenko said: “This will be a major political campaign designed to gradually shape the political agenda for the opposition and expand the range of its supporters.”

A recent poll conducted by Public Opinion Foundation shows that almost a quarter of Russians (24 percent) are aware or have heard of the opposition’s Coordinating Council. Of these people, 35 percent believe that the Council will not become an influential political power, compared to just 8 percent that think it will (57 percent were undecided).

Importantly, the majority of people that think the Coordinating Council will turn into a serious political power are those respondents ready to participate in protests ‒ young people with university degrees and those who support Mikhail Prokhorov and the political party A Just Russia. These respondents insist on several things about the opposition Council: the authorities need an opposition; the Council has been formed for a good reason and authorities will have to reckon with it; the Council will voice the opinion of a significant part of society, and it comprises decent, influential and active people with new ideas.

Muscovites, those who make more than 20,000 rubles ($640) per month, inhabitants of cities with a population of 250,000–1,000,000 and middle-aged university-educated people appear to be skeptical about the future of the Council. They believe that authorities will not allow the Coordinating Council to become influential ‒ that “people on the Council do not have any credibility; they are unknown and have no support.” They also believe that there is no unity within the Council:  “its members don’t share any common values” and “the Council is financed with Western money.”

In general, 21 percent of Russians polled by Public Opinion Foundation want the Coordinating Council to become a real political force, while 34 percent do not. Most of those who want the Council to gain influence are young people with university degrees and those who support Prokhorov, whereas those living in Moscow and other highly populated cities have no such wish.

The respondents were also asked their opinions of the 20 members of the Coordinating Council who received most of the votes during the elections to the self-governing body.

First publihsed in Russian in the Expert magazine.