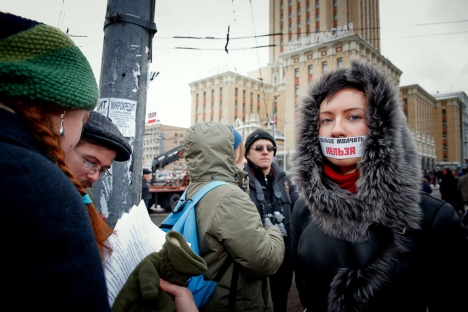 The Russian protest movement is at a crossroads, according to experts. Pictured: Post-election protests held on December 24, 2011. Source: Ruslan Sukhushin

This December marks the first anniversary of the mass protest rallies that engulfed the country in the wake of the 2011 State Duma elections. While the movement has managed to structure itself, it is not clear where it will go next. Experts believe that the opposition is at a crossroads.

One year ago, Russia's streets were hit by a wave of protests from disaffected citizens demanding a do-over of the parliamentary elections. The first rally took place the day after the vote in Moscow, on December 5, 2011.

Faces of the protests. View gallery

The following year witnessed rallies held in many Russian cities and abroad, with another surge following the presidential elections in March 2012. The protests in the Russian capital were dubbed the "March of Dissent" and the "March of the Millions," but the "millions" were conspicuous in their absence on the streets. Organizers constantly cited tens and even hundreds of thousands of people, while law enforcement agencies reported much smaller numbers.

After the parliamentary elections, protesters demanded a fresh vote, the release of political prisoners, Vladimir Churov’s resignation from his post as head of the Central Election Commission (CEC), and the registration of opposition parties.

The authorities responded. Following allegations of numerous violations in the parliamentary elections, presidential candidate Vladimir Putin gave instructions for webcams be installed at all polling stations. As a result, the vast majority of premises were equipped with video surveillance, and a special website carried a live broadcast of the vote.

However, on election day, the CEC had its hands full in dealing with violations related to the installation of these very same webcams, some of which were not even directed at the ballot boxes. As for reports of irregularities in the voting and counting procedures, the CEC stated that those could hardly have had a significant impact on the outcome of elections.

Observers, both domestic and international, acknowledged that the presidential election was "cleaner" than the parliamentary one, citing the webcast as one of the reasons.

In addition, the State Duma passed a law to reduce the minimum number of members required for a party to register. As a result, 19 new parties took part in the regional elections of October 2012. Two of them, the Communists of Russia and the Republican Party of Russia (PARNAS), gained enough votes to enter the municipal parliaments of Karachaevsk and Barnaul.

Fall 2012 also saw the first direct elections of governors in Russia in eight years, although the candidates were filtered.

As for the protest movement itself, which consists of representatives from across the political spectrum and non-aligned members of the public, it has realized the need for more structure. In October 2012, elections were held to the Opposition Coordinating Council (OCC), which is made up of 45 members. The leader of the movement is renowned blogger and anti-corruption activist Alexei Navalny.

On Dec. 15, the OCC will mark the anniversary of the protests by holding its first meeting. The protesters' demands have not changed, and they still include re-elections and the release of political prisoners.

The pro-Kremlin party United Russia, which won the parliamentary election, believes that the street opposition has failed to manifest itself this past year. "They billed themselves as an alternative. But [they] let the chance slip, and now the clock is ticking against them," said Olga Batalina, deputy secretary of the General Council of United Russia.

On top of that, Alexei Chesnakov, academic director of the Center for Current Politics, believes that the "white ribboners" (referring to the white ribbons that became a symbol of the protest) made many mistakes. The creation of the OCC itself is no great achievement, he asserts.

"The organizers executed their basic task: to concentrate human and organizational resources to turn the OCC from a mob into a proper entity. But the tactic of focusing on structure may not have the desired effect," said Chesnakov.

The political scientist believes that the protest movement "will not come to power in the near future." According to him, only toward the end of next year will it become clear whether or not the protest movement is able to compete with the government. "They are still at the start of their journey. The OCC has different paints in its box, but no artist to create a canvas," Chesnakov said.

Meanwhile, the director of the Institute of Political Sociology, Vyacheslav Smirnov, draws attention to the achievements of the opposition. As chief among them he cites the emergence of new leaders, who, in addition to Navalny, include the coordinator of the Left Front, Sergei Udaltsov.

However, experts say that the past year has shown that "the public is apolitical and dislikes the ruling leaders and the opposition in equal measure." In this regard, Smirnov predicts that the liberal protest movement will stagnate.

In response to such criticism, OCC member Gennady Gudkov says that the protest has not disappeared and will continue to develop, despite the ups and downs.

"Safe behind the walls of the Kremlin, it is easy to think that everything has died down ‒ but that is not the case. A year ago, we were quite pleased to get a couple of thousand people out onto the streets. Now everything has changed. The OCC has united the new leaders of the protest wave," said Gudkov.

However, he agrees that the Russian protest movement is at a crossroads and that its future course depends on the willingness (or unwillingness) of the authorities to hear its demands. If the government listens to the protest movement, the opposition will seek a compromise; if they ignore it, the protest may become radicalized and uncontrollable, Gudkov warns.