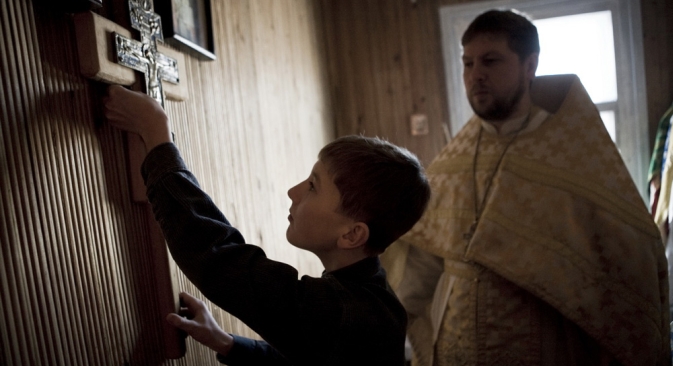 There is a simple greatness of daily life which can only be revealed far from big cities. Pictured: Fyodor helps to his father - Orthodox priest Roman - during the Sunday Service. Bagan Village, Novosibirsk Region, 2011. Source: Valery Klamm

A photography project in the city of Novosibirsk called "Birthmark on the Map" reveals life outside of Russia's capital and brings together photographers from all over the world.

In partnership with the local Agency for Regional Promotion, Novosibirsk photographer Valery Klamm created a photo project three years ago called Birthmark on the Map: Russia beyond the Capital.

Birthmark on the Map is an exhibition of stories of provincial life in words and pictures. The heroes of Birthmark on the Map include a village paramedic, the director of a folk theatre in a small town, the head teacher of a village school, a mother with a family of adopted children, a country priest and a street performer.

View the gallery: “Birthmark on the Map”: Meet the Siberians in their daily life!

There is no space to list them all — the list is as wide-ranging as life itself. Even so, Birthmark on the Map does not try to be all-embracing. On the contrary, it is a private family history of life away from the capital. It is a life that goes by the same rules in the depths of Siberia as it does in the Australian outback or the English moors, for instance.

The project began as one of the fashionable "regional brand-making" ideas, but quickly extended its reach to cover Novosibirsk Region, then Siberia, and finally all of Russia. Soon, the project embraced contributions about “life away from the capital” from many points of the globe.

“Back in the spring of 2011, I met a well-known Mongolian Studies expert called Natalya Zhukovskaya at the Multinational Russia Ethnographic Forum,” Valery Klamm said. “Natalya said to me back then, ‘My students have made a comparative study of provincial life all around the world. It seems that whether it's Russia, North America or South Africa, we all have a lot in common.’”

“What she said to me coincided with my own ideas about how the project could grow and develop into a simple concept,” Klamm added. “We needed to add a Birthmark on the Globe section on photoblogs. I wanted our own feed to feature stories from other regions and from other countries and continents, so that we could somehow present themes from different parts of the world side-by-side.”

Two years ago, Birthmark on the Map community went beyond the online world. These days, the Birthmark on the Map exhibition and its curator are constantly on tour in different places in Novosibirsk Region and nearby cities. People in small towns adore the exhibition, and for obvious reasons. However, Klamm's project is not just about villages and, more importantly, it is not only for people who live in them.

Birthmark on the Map might be found at the Novosibirsk Tech-Park, or at the cutting-edge “Pobeda” cinema complex, or even in the passenger terminal at Novosibirsk's Tolmachevo Airport. It was in the airport that Novosibirsk Region celebrated its 75th anniversary in fall 2012, with an exhibition called SKY-EARTH and material from the same photoblog. Earlier, in spring 2012, Klamm was invited to participate in one of the world's biggest photography festivals, Head On, in Sydney.

“When I decided that we'd make a section called Birthmark on the Globe,” said Klamm, "I started to look for the first contributors. While I was looking on the net, I found a superb story called ‘Postcards from Home.’ An Australian photographer, Sam Harris, who'd originally emigrated there from London, spent two-and-a-bit years photographing his two daughters growing up. I asked Sam if he'd be the first participant in the new category, and we began sharing ideas about it. The whole thing could be typified in one word – ‘bridge.’”

It was Harris who pestered the director of the Head On festival, Moshe Rosenzweig, into taking a look at Klamm's project. At first, Rosenzweig suggested that Klamm should show his multimedia project in Sydney, remotely from Russia. Then, said Klamm, “the project began to grow on the director of the festival.” Eventually, Rosenzweig decided to mount the Birthmark on the Map exhibition at the festival's expense, and they invited Klamm to come to Sydney.

The Head On Photo Festival has nearly 200 exhibitions. The director himself only curates around a dozen of these personally, but the Siberian project was among that dozen. Rosenzweig personally selected the images for inclusion in Sydney, lamenting the fact that he had to choose, since he had “liked every one of the 160 works Valery sent in.”

The Sydney showing of the Birthmark on the Map exhibition ended up featuring 44 images by 12 different photographers from Krasnoyarsk, Magnitogorsk, Novosibirsk, St. Petersburg, Moscow and Australia (including both Valery Klamm and Sam Harris).

The director of Head On said that his fascination with the Siberian project was due to his love of making discoveries and being able to share them. The heartfelt stories presented in Valery's project found an immediate place in the hearts of exhibition visitors. When asked if the exhibition gave an objective picture of provincial life, Klamm said that they didn’t “sit in judgment in our Birthmark on the Map project.”

“We don't stand over the people, we stand alongside them,” he said. “The relationship of people with their homeland... they're like relatives. You may have had a falling out with your mum, but you're not going to announce that to the whole world. But that is exactly what journalists do. There's been a lot of prejudiced ‘grim stuff’ photographed of Russia's provinces.”

“And it's when this stuff is presented as the truth that the real lie appears,” he added. “Personally, I spend a lot of time travelling in Russia's provinces, and I see a different truth there. That's the material I show you. Life is simple in the provinces. In Birthmark on the Map we present that simple life, in simple words, and with a simple visual language. You could call the project a kind of support system for the structure inside us.”

It is Valery Klamm's hope that “the bridge of popular ‘photo diplomacy’ will be able to span new horizons.” Photographers from different countries who saw the Birthmark on the Map exhibition in Sydney said that now they want to come to Russia.

There in Australia, they began discussing the idea of holding an international photo exhibition in Novosibirsk Region, where there would be meetings with local residents, photo shoots and lectures about photography (including Australian photography). The result would be an exhibition about life in the deep heartlands: first in Siberia, and then in Australia.

In December 2102, five participants in the Birthmark on the Map community will make the project a contribution to the Angkor Photo Festival in Siem Reap, Cambodia; although, they will not be present at the festival.

More than 1,200 photographs from 65 different countries have been submitted for possible inclusion in the 2012 exhibition. The program features works from 93 photographers, of whom five represent the Birthmark on the Map photoblog: Ludmila Tabolina (St. Petersburg), Aleksander Kustov (Krasnoyarsk), Alexey Malgavko (Omsk Region), Alexander Stepanenko (Murmansk) and blog coordinator Valery Klamm.