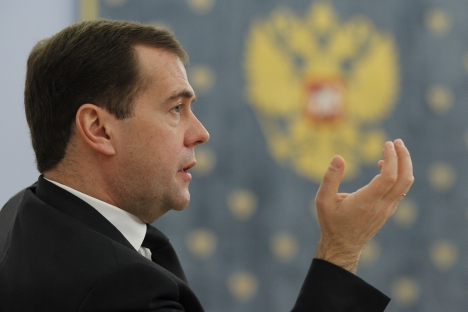 According to Russian Prime Minister Dmitry Medvedev, inflation remains a serious problem. “The situation is manageable, but not ideal,” he said at a recent Cabinet meeting. Source: ITAR-TASS

Russian Prime Minister Dmitry Medvedev believes that “the situation in Russia’s economy is, on the whole, normal.” Russia has an advantage over other emerging markets in its fairly high domestic demand. According to experts, this demand must be supported and stimulated in every way possible.

At a recent Cabinet meeting, Medvedev noted that the macroeconomic picture in Russia today “has achieved good results, if you take the world situation into account.”

The macroeconomic situation is stable, especially against the backdrop of the substantial difficulties being experienced by both the European and world economies.

Medvedev reminded his listeners that the GDP for January-October 2012 had increased by 3.7 percent, over the GDP for the same period in 2011. Industrial production has grown by 2.8 percent. Investment in fixed capital is increasing at a rate greater than was forecast, at over 9 percent.

Unemployment is continuing to go down; today, it is at about 5.3 percent, or some 4 million people (this figure was calculated using the International Labor Organization’s method). In October 2011, unemployment was at 6.4 percent, while the number of officially registered unemployed people in October 2012 was around 1 million (998,000).

This positive dynamic has shown in real monetary earnings, which have increased by 3.5 percent. And here is another positive figure: between January and September of this year, nearly 1.5 million Russian children were born. That is 80,000 more than for the same period last year. For several months in a row, the population has increased. In September alone it increased by 11,500 people — almost three times more than in September 2011.

Dmitry Medvedev also remarked on the improvement in the investment climate: for the first time in eight years Russia has improved its position in the World Bank ratings. Judging by certain indices, the situation looks relatively good. For example, in tax administration Russia has risen to 41st place.

This is the most significant advance among all the countries participating in this rating. “We shouldn’t get swell-headed,” said Medvedev, “but nevertheless this figure isn’t bad, it’s not a bad showing.” He added that Russia “needs to keep up this rate.”

Inflation remains a serious problem. “Here,” said the prime minister, “the situation is manageable, but not ideal.” For the first 10 months of 2012, inflation was at 5.6 percent, or somewhat higher than for the same period last year (5.2 percent). But inflation in Russia is largely non-monetary, which affords the government some comfort from the point of view of monetary policy, says Dmitry Aleksandrov, head of analytic research at the Univer Investment Group.

Inflation can be fought in a number of ways, by stimulating demand for goods with the help of government programs. This concerns both agriculture and food supplies. At the same time, tariff regulation remains one of the main drivers of inflationary pressure; and changes in the method of calculating the consumer basket cannot be overlooked.

At any rate, in the present situation, inflation need not be seen as a threat to the stability of Russia’s economic growth. The situation in world finances and the industrial activity of the main exporting economies entail substantially greater risks.

According to many indices in 2012, and compared to countries in the Asia-Pacific region and countries in the eurozone, the Russian economy has shown one of the best results, says Aleksei Rybakov, head of analysis at the Trade-Portal Investment Group.

The main exceptional indicators for the Russian economy show a stable increase. Indicators for freight shipped by rail, investment in fixed capital, turnover of merchandise, retail sales and the base shipment index in various sectors of the economy give hope for a good first quarter of 2013.

Of course, the Russian economy also has risks: enterprises are experiencing pressure due to a decrease in world demand, says economic observer Anton Golitsyn of the independent forum Et-Trade. The high currency risks are due to the strong volatility of world currencies — primarily the euro and the U.S. dollar. However, there is the possibility of Russia helping to preserve stability.

First of all, there is a low level of debt in Russia: even after the floatation of Eurobonds at the beginning of the year, Russia’s general debt level did not exceed 20 percent, whereas Germany has a debt level of over 80 percent. Thus, on the one hand, Russia can be seen by investors as a non-risk region, and, on the other, Russia possesses sufficient opportunities for attracting new foreign funds for purposes of development.

Secondly, Russia, unlike many emerging markets, is oriented more toward the domestic market. This is why Russian has been able to avoid the problems of China, which has been experiencing a serious economic slowdown since the United States and Europe reduced their demand for Chinese goods.

Still, Russia cannot help but feel the pressure of the world financial crisis, since it is a full-fledged element in the global economy, says Elena Chernoletskaya, deputy head of analysis at the Moscow Reserve Center. Russia, however, also has a number of advantages that separate it from the problems of both the European and Asian regions.

The main positive quality of the Russian economy is its high domestic demand, which has been preserved among end users and among major economic participants (primarily enterprises). This demand has allowed Russian companies to make up for the drop in consumption on Western markets and also show a positive dynamic.