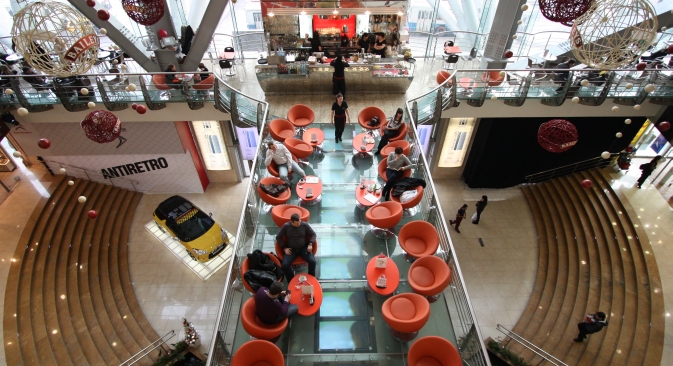 Despite fears of Europe’s economic woes spilling over toward the East, spending is at an all-time high and debt is low.

It’s Saturday afternoon in the Evropeisky shopping center, which stands on the banks of the Moskva just a short distance from Russia’s White House, the home of the government. What was, only a few years ago, a barren patch of wasteland that played host to an informal cigarette wholesale market, is today a sparkling new mall which houses hundreds of shops and boutiques and attracts growing crowds of eager shoppers.

This scene at the Evropeisky wouldn’t look out of place in any major city in the world, except for one thing – measured in terms of customers per square meter, the Evropeisky is by far the world’s busiest shopping center in terms of customer traffic. With 811 customers per square meter, it boasts six times as many as the world’s second most popular shopping destination, The Dubai Mall.

Despite the recent economic slowdown, shopping is booming in Russia, driven largely by soaring consumer credit. Even if we exclude the Evropeisky from the statistics, Russia’s major retail centers enjoy a level of customer attendance comparable to the best shopping centers anywhere in the world. 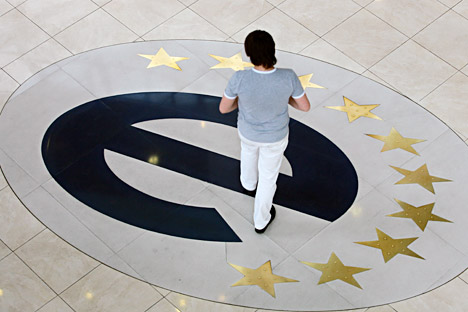 It seems that, after 70 years of deprivation, Russians are now taking advantage of their growing prosperity to start stocking up on some of those little luxuries that most in the West take for granted.

While the rest of the economy suffers, consumption is being driven by soaring consumer credit.

Companies and banks were in the front line following the collapse of Lehman Brothers in 2008, but the Kremlin worked hard to shelter the population from the fallout of the 2008 collapse, bailing out troubled banks and propping up state-owned companies. Wages have continued to rise throughout the crisis, while unemployment is currently at a 20-year low of 3.8 percent.

Add to this the fact that the average Russian has no debt to speak of – everyone was simply given their apartment by the state in 1991 and things such as mortgages and credit cards have only just taken off – and the average Russian is free to borrow heavily, most of their income being disposable. Retail loan growth sped up in October, surprising the economists, who were expecting it to slow in the second half of this year.

The consumer-borrowing binge is spilling over into other sectors of the economy directly connected to shopping. Supermarket chains are the first beneficiaries: The last thing consumers cross off their shopping list, even in tough times, is food. Most of Russia’s leading supermarkets are reporting 2012 revenue growth of up to 33 percent year-on-year.

Car sales have also been strong, increasing by 13 percent year-to-date, according to the Association of European Businesses. Russia is on track to become the largest car market in Europe within the next five years. Spending is also driving investment into commercial real estate: In November, Moscow was ranked the third most attractive investment destination in Europe for retailers, by Jones Lang LaSalle.

“More than 90 percent of the most popular European brands operate in the Russian market already, with the rest considering entry,” said James Brown, head of EMEA retail consulting and research, Jones Lang LaSalle. “Within the coming years, the high level of disposable income and the rapidly growing middle class will make the Russian retail market one of the European leaders in terms of turnover.”

And because Russian consumers are buying increasing amounts of big-ticket items, the more traditional financial services have also started to take off there. The potential of Russia’s mortgage market is unparalleled in Eastern Europe, say analysts at UralSib.

The housing stock is among the lowest in the region, but then so are the ratios of mortgage debt to GDP, at only 3 percent. This compares with 9 percent in Ukraine, 12 percent in Poland, 34 percent in Latvia and 36 percent in Estonia, UralSib points out.

Express loans made at the point of sale introduced most Russians to buying on the never-never, and they still account for about a third of white-goods and furniture purchases. The use of credit cards has also taken off during the past year: The Russian credit-card market increased 60.3 percent during the first nine months of 2012, to 590 billion rubles ($19 billion), with no sign of slowing down.