Taking a trip through St. Petersburg in hyper lapse 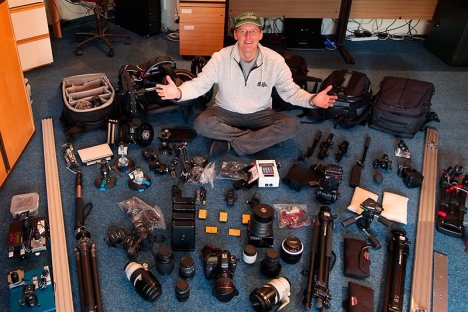 Photographer Geoff Tompkinson: "Hyper lapse is basically a technique whereby the camera moves through the scene while the time lapse is being made." Source: Press Photo

Geoff Tompkinson is a photographer and video producer who has made it his mission to explore the world by bringing a new perspective to it. His latest endeavor is “Around the World in Hyper Lapse” — a project that led him and his wife Liz all over the world, documenting the beauty of the locations they came across. The final product was a series of videos shot using a hyper-lapse technique, which is a variation on time-lapse photography.

Russia, of course, could not be left out of project. In fact, St. Petersburg provided the perfect setting for two of the project’s videos.

In “Moving Through Saint Petersburg,” a condensed journey through all of St. Petersburg’s historical landmarks captures the vibrant, romantic and mystic atmosphere of the city. “Moving Through the Hermitage” takes the viewer directly inside the State Hermitage Museum for an innovative experience of Russia’s art treasure. Ilaria Parogni of RBTH talked to Geoff to find out more about the Russian leg of his project.

RBTH: What is "Around the World in Hyper Lapse" all about?

Geoff Tompkinson: Together with my wife Liz, I have been traveling to the world's major cities for many years, producing time-lapse movies with a specialization in “day-to-night” sequences. We are now revisiting many of those locations to utilize hyper lapse, a new technique.

The current plan is to include the following locations in the first round: London, Paris, Rome, Barcelona, Strasbourg, Venice, Moscow, New York, Washington, Tokyo, Hong Kong, Shanghai, Singapore, and a few others. All these trips will be covered in real-time on my Facebook page.

RBTH:Can you tell us a little more about the hyper-lapse technique?

G.T.: Hyper lapse is basically a technique whereby the camera moves through the scene while the time lapse is being made. Normally, in a time-lapse movie, the camera is either still (on a tripod), or it moves a short distance along a track with its speed of movement controlled by timed electronic motors.

Hyper lapse enables much longer moves to be made without any need for a track or motors. Because the speed of movement is very slow, it is possible to move through crowded scenes with no disruption to the normal flow of the crowd. The technique itself involves manually moving the camera a measured distance between each exposure.

The movements and the position of the camera must be adjusted very accurately each time an exposure is made. Finally, the technique relies on a lot of post-production computer work to stabilize the result and produce a smooth movement.

RBTH: Russia has been among the destinations of your project. Which cities have you visited?

G.T.: Our recent shoot in St. Petersburg was the first time we have visited Russia, so our impressions are limited to that city. We found it to be a very good place to work, with lots of amazing locations and buildings for photography.

Shooting inside the Hermitage Museum using the hyper-lapse technique had never been done before, so we feel privileged to have been given the chance to work there. The building — both outside and especially inside — is absolutely wonderful. Moving through the rooms and crowds flooding to see the exhibits was a great experience and a great application for the hyper-lapse technique.

RBTH: What were your first-hand impressions of the city?

G.T.: We found the people of St. Petersburg to be very friendly and helpful, and we were given access to some amazing locations to shoot from — like on the top of the Church on Spilled Blood, for instance.

RBTH: You have visited many countries over the years. What have you found in Russia that you couldn't find elsewhere? What makes Russia unique?

G.T.: The buildings lining the water are the best-lit set of buildings we have seen in any city in the world.

RBTH: What is the best photographic subject you have found in St. Petersburg?

G.T.: All in all, a wonderful city to visit, both as a photographer or as a tourist.

RBTH: You are planning to go back to Moscow next year. What will you be working on there?

G.T.: We are looking forward to doing a comprehensive shoot in Moscow. That project is currently in the early planning stage, with locations, permissions and pricing yet to be finalized.