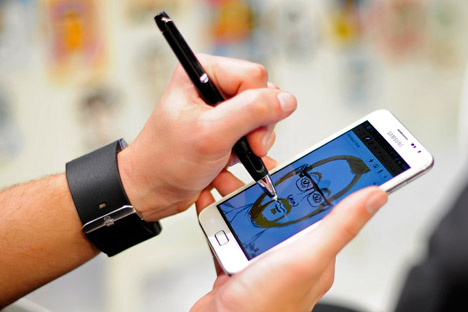 Volume sales of smartphones in Russia have continued to grow in 2012. Source: AP

Industry experts say volume sales of smartphones have continued to grow in Russia in 2012. Russians are buying more devices that operate on the newer Microsoft Windows Phone platform, while sales of Apple’s iPhone have leveled off in the country.

Russian cellphone experts met recently to discuss the state of the industry. They cited the growing popularity of smartphones as the main trend today, along with fiercer competition amongst their manufacturers, which could lead to a drop in prices.

A roundtable held at RIA Novosti by the information analysis agency Telecom Daily was attended by representatives of mobile phone and mobile platform manufacturers, mobile operators and retailers. They discussed the state of the mobile market in Russia and confirmed key trends of the past several years.

In particular, volume sales of smartphones in Russia – especially less expensive models – have continued to grow in 2012. The industry experts singled out a marked increase in sales of devices working on the relatively new Microsoft Windows Phone platform; meanwhile sales of Apple’s iPhone have plateaued in Russia.

“The segment of inexpensive smartphones (up to 5,000 rubles or $165) is growing,” said Andrei Chukaev, director of subscriber equipment marketing for the mobile operator MTS. Chukaev based his remarks on recent MTS retail sales data. “The smartphone sales volume share is around 30 percent. Nokia’s volume share is decreasing, although a third of the phones in our network are still Nokia brand. The share of devices with Windows is also growing, while the share of devices with iOS is almost level.”

Chukaev added that, among current MTS subscribers, there are roughly twice as many users of phones on the Microsoft platform as users of Apple smartphones.

According to Telecom Daily, by the end of the year Russia will have produced more than 42 million telephones, of which 31 percent will be smartphones. Smartphones also account for around 69 percent of retailers’ revenues in this market.

In the opinion of Telecom Daily CEO Denis Kuskov, the popularity of smartphones is continuing to increase in Russia, while competition amongst the various manufacturers of mobile phones and platforms is becoming fiercer; he believes this will lead to a drop in smartphone prices. “The competition in this market is to the consumer’s advantage,” said Kuskov. “The average price of a smartphone is now around 10,000 rubles ($330).”

Meanwhile, Kuskov’s statistics show that, in 2012, the volume share of Nokia (once a leading player in mobile phones) decreased to 18 percent. In the last few months, however, Nokia sales have increased, thanks to the launch of their new Lumia models operating on the Windows Phone platform. Today, the leading position in mobile phones is held by Samsung, which has increased its volume share by almost a third – up to 44 percent.

In the last few months, Apple sales in Russia have actually gone down. In September 2012, the American smartphone manufacturer had a 4.3 percent volume share of the Russian mobile phone market, as compared with 5.4 percent in September 2011.

Sergey Ezyk, head of Microsoft Windows Mobile promotion in Russia, believes that consumers’ increasing preference for smartphones is largely influenced by the ecosystem created around this device or its group. “Today it is hard to assess the smartphone market independently of laptops,” he said.

According to Chukaev of MTS, the cornerstone of relations between a mobile operator and a manufacturer of mobile phones is the ability to increase revenues.

“On the market, there are several ecosystems that allow one to do this. There are companies we are now talking to about making customized smartphones (with MTS offers already installed). We are working with certain companies to make smartphones more affordable through special promotions. Collaboration with certain other companies has not made a significant difference in profits,” said Chukaev.

Another characteristic noted by Chukaev is the mobile operator’s near-stagnant revenues from voice services and the necessity of teaching subscribers to take greater advantage of the data-transfer service. MTS is ultimately counting on boosting revenues by means of content distribution.