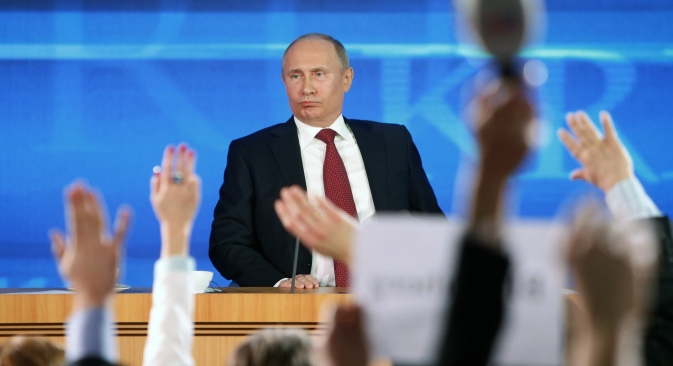 When asked about the retaliatory bill on U.S. adoptions of Russian orphans, Russian President Vladimir Putin said he understood "that’s an emotion-driven response of the State Duma" and described it as "a proper response.” Source: AP

The Russian president gave the green light on a bill that will prohibit Americans from adopting Russian children. The proposed legislation was initiated in retaliation against America’s newly passed Magnitsky Act, which targets Russians suspected of violating human rights.

Russian President Vladimir Putin stated on Thursday, Dec. 20, that he will decide whether or not to go ahead with a controversial ban on the adoption of Russian orphans by American couples after he has read the text of the bill that the State Duma passed in its second reading on Wednesday. Out of 10,816 Russian orphans adopted last year, Americans adopted 956.

“I support [the ban],” Putin said at his annual press conference in Moscow, which was attended by some 1,200 journalists from Russia and abroad. “The question is in what way, in what wording [to have it]. I need to take a look [at the bill]. I’ll try to do it today or tomorrow.”

The motion was passed shortly after U.S. President Barack Obama signed the Magnitsky Act last week, effectively denying U.S. visas and blocking transactions in U.S. dollars for Russians believed to have been involved in the tragic death of the Russian lawyer Sergei Magnitsky. In 2009, the lawyer died in a Russian prison, where he had been placed after exposing the embezzlement of $230 million by government officers. The case has still yet to be investigated.

“I understand that’s an emotion-driven response of the State Duma, but I believe it’s a proper response,” Putin said of the retaliatory bill on U.S. adoptions of Russian orphans.

“Having lifted an anti-Russian, anti-Soviet act, U.S. legislators decided they should pass another anti-Russian act immediately,” Putin said, referring to the Jackson-Vanik amendment that Washington repealed in mid-December in a bid to restore permanent, normal trade relations with Moscow.

The Jackson-Vanik amendment was repealed simultaneously with the adoption of the Magnitsky Act. Trade relations between the two countries were interrupted 38 years ago over what Washington believed was unfair treatment of Jews in the Soviet Union.

“We took it as U.S. lawmakers making it clear to us who’s the boss here. If there was no Magnitsky, they’d have found another pretext. Mr. Magnitsky died of a heart attack, no one tortured him,” Putin said.

At the same time, the president emphasized that Moscow and Washington are not enemies. “We just need to be patient and seek compromise,” said Putin. “I don’t think it’ll affect the investment climate or the economy. We just should pursue our national interests.”

Besides the Duma’s controversial response to the Magnitsky Act, President Putin also touched on a number of other issues during his four-and-a-half-hour Q&A session with the press.

Russia, he said, will continue working in close contact with its international partners in the G-8 and the G-20, the latter of which Russia assumed a year-long presidency on Dec. 1. “We’d like to focus our presidency on two main issues: securing economic growth and creating more jobs,” Putin said.

Putin cited a slew of stats to demonstrate that Russia is faring well in the face of a global crisis. Russia’s GDP, he said, grew 3.7 percent from January through October of this year, slowing down by 0.6 percent annually.

“I believe it’s a good result, given the slowing economic growth in the United States and the sagging in China,” he said. Unemployment dropped from last year’s 6.6 percent to under 5.4 percent. Real incomes grew 4 percent, compared to only 0.8 percent last year. Salaries increased 8.8 percent, reaching 27,607 rubles ($900). An average pension was 9,810 rubles ($320) in October, Putin stated.

Speaking on topical issues of international agenda, Putin touched on the ongoing conflict in Syria. Moscow’s position in the Syrian conflict, according to the president, is to have the parties arrange their living, security and governance issues amongst themselves.

“We’re not concerned about the fate of Assad’s regime,” Putin said. “We understand what’s going on there and that one family has been 40 years in power. A change is certainly needed. We just want to avoid a situation where, having come to power, the opposition will clamp down on the incumbent government.”

The president highlighted positive trends in Russia’s relationship with China. “Relations between Russia and China are at a very high level – I’d say at an unprecedentedly high level, in terms of trust and cooperation,” Putin said.

Finally, Putin had to take on the vexing question concerning the future of imprisoned oil tycoon Mikhail Khodorkovsky.

“I am certain that, when in accordance with the law everything is right, Mikhail Borisovich [Khodorkovsky] will be set free,” Putin said. Judge Dmitry Fomin announced on Thursday his ruling at the Moscow City Court to reduce Khodorkovsky’s 13-year sentence to 11 years. As a result, Khodorkovsky is set to be released in October 2014.