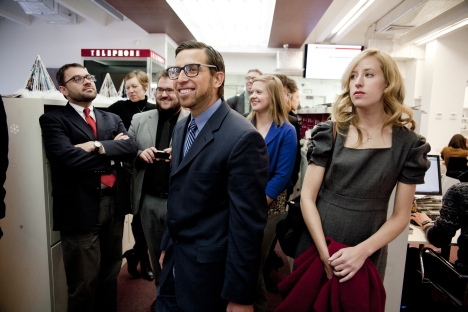 The participants of the journalism exchange program between Russian and American media organizations visiting the RBTH office. Source: Ruslan Sukhushin

Over the last three weeks a dozen young American journalists, from hard-bitten politicos and photographers to bloggers and history buffs, have been getting the inside scoop on Russia - by infiltrating some of Moscow's most influential Moscow newsrooms.

Washington and Moscow may be taking potshots at each other over the Magnitsky Act and the U.S. adoption of Russian children, but not everyone has given up on the idea of a reset in Russian-American relations.

Over the last three weeks a dozen young American journalists, from hard-bitten politicos and photographers to bloggers and history buffs, have been getting the inside scoop on Russia - by infiltrating some of Moscow's most influential Moscow newsrooms.

The invasion is not a fifth column of "foreign agents," however - as foreign media and NGOs have been described in recent Russian legislation - but a professional exchange between Russian and American journalists' organizations, where journalists get to experience a foreign country's media by working alongside their American and Russian counterparts, respectively.

For the American journalists, their stay in the Russian capital was to end with the marathon annual press conference given by Russian President Vladimir Putin on Dec. 20, a prospect that seemed to intrigue them.

"In the States, we just don't have this kind of press conference from the president," said one participant. "It's usually just the White House pool, and it's much shorter."

In contrast, Putin's Q&A sessions with up to 1,000 Russian and foreign journalists have been known to last four hours and more, with the atmosphere more often resembling a town hall meeting with small-town journalists than a high-powered Washington grilling of American presidents.

While the 12 young Americans were braving temperatures of minus 20 degrees Celsius in Moscow, 12 of their Russian counterparts gathered in Washington, then were dispersed to the four corners of the United States, working in a range of American media, from websites and TV stations to small-town newspapers.

The experience for the Americans in Moscow was an eye-opener, several of the participants said at a festive lunch-cum-debriefing session at Russia Beyond the Headlines' offices in Moscow.

Aaron Sharockman, of the Tampa Bay Times in Florida, said he had found from working in the Komsomolskaya Pravda newsroom that Russian and American editorial teams "just do things a bit differently."

Sharockman said he was impressed with the way that KP journalists pursued a story, as he felt they often had to dig into a controversy in a "roundabout way" rather than come out with direct criticism of the authorities - a sentiment supported by some of his colleagues.

Paul De Revere, of the Talahassee Democrat, said he had learned a lot from working at Vechernaya Moskva (Evening Moscow), but had enjoyed most of all interacting with "small groups of people and one-on-one - that's how you make world peace."

Vladimir Ravich, from an online New York radio station, said he had found that the stereotypes about Russia were "mostly true - but it's more complicated than you think."

The participants of the journalism exchange program between Russian and American media organizations visiting the RBTH office. Source: Ruslan Sukhushin

Meanwhile, Alissa Ambrose, who worked in the Itar-Tass newsroom, said Russian journalists told her that they would like to write more about controversial topics, but sometimes felt constrained.

But all participants agreed that the experience had been extremely valuable, and showed them different sides if Moscow than they had expected.