What does Moscow expect from Russia-EU summit? 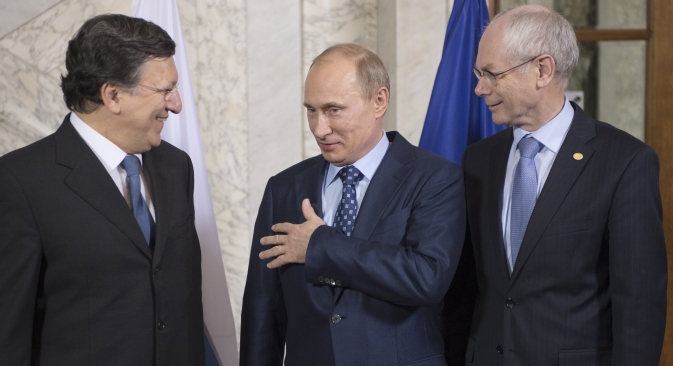 With Russia-EU summit in full swing, Russia’s permanent representative to the EU, Vladimir Chizhov, talks to Kommersant Daily about the prospects for Russia-EU relations.

Kommersant: How do you assess the current state of relations between Russia and the European Union? Serious differences crop up on diverse issues: from the situation in Syria and the conflict around Iran, to the outcome of the elections in Belarus and Ukraine, the controversy over the work of Gazprom in the EU and opinions on the political situation in Russia.

Vladimir Chizhov: There are always positive and negative aspects to the relations between Russia and the EU. And Russia’s situation is not unique.

If you ask me if it is easy to deal with the EU, I am sure the majority of states in the world (at any rate, all the leading states) would answer roughly the same: the EU has never been and never will be an easy partner. You have mentioned some knotty foreign policy issues. It is true that we do not see eye to eye on them. Yet there are other, more positive examples.

For instance, we are working fairly well with the EU as a member of the Middle East “quartet,” and we cooperate in maintaining strategic stability.

Naturally, the EU sometimes has questions regarding the situation in Russia. However, we too sometimes have questions about problems in the EU, including the human rights situation.

Kommersant: Why was it that no agreement has been reached on visa-free travel for holders of service passports, which would have launched a substantial liberalization of the visa regime?

V.C.: Statistics show that, in 2011, more than 5 million Shengen visas were issued to Russian citizens. The number of Russian visas issued to EU citizens is slightly smaller, but still significant.

We are engaged in two parallel negotiating processes: the first is on joint steps that would lead to the visa regime being lifted; the second is on improving the 2006 agreement on visa simplification.

Along the second track, we are poised to adopt an updated version of the 2006 agreement. It is to expand the practice of issuing multiple-entry visas, clarify some issues and simplify a number of procedures. During the discussion on ways to adapt the current agreement, Russia proposed spreading the visa-free regime to short trips by holders of diplomatic and so-called service passports.

Why did the process stall? From the outset, our European partners were uneasy about the number of service passport holders in Russia (although they are fewer than in the EU). The large number is, above all, a result of all Russian servicemen stationed in CIS countries being issued service passports.

In my opinion, the European Union countries simply did not have the political will to agree to abolish visas for the following category of citizens.

Kommersant: How do you see the situation developing?

V.C.: We’ll see how the negotiations go. I would not like to anticipate the results. In our opinion, most EU member countries are ready to sign such agreements.

Kommersant: As regards the first negotiating track, is work on abolishing visas likely to begin in the first half of 2013?

V.C.: There is such a chance in technical and organizational terms. Whether the schedule will be adhered to depends, again, on the presence of political will.

Kommersant: How likely is the EU to pass an analogue to the Magnitsky Act?

V.C.: This has been discussed in the European Parliament. I think that, at the end of the day, common sense will prevail and the EU will not pass such a law.

Kommersant: What is the status of the negotiations on a new basic cooperation agreement between the RF and the EU?

V.C.: We made a joint decision on the need for a new basic agreement back in 2006. But the negotiations did not start until 2008, after the EU Council approved the negotiating mandate. Twelve official rounds have been held since then.

The situation is not at a stand-still. During the time since the previous round, the process of economic integration in the Eurasian space has picked up.

Kommersant: Does that impact on the negotiations with the EU?

V.C.: Yes. All this needs to be taken into account, because Russia has handed over a whole range of competences from the national level to that of the Eurasian Economic Commission.

Kommersant:What can one expect from the December summit? Will any important documents be signed?

V.C.: The success or failure of an event is not determined by the number of documents signed. Most of our summits have not passed any final documents, but that did not make them any less successful.

The interview is abridged and first published in Russian in Kommersant Daily.