Russia is running out of TV shows 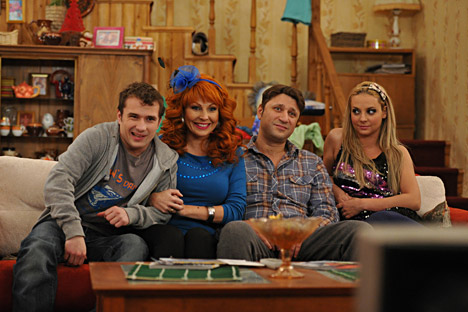 Bukins from "Happy together", the Russian version of the American series “Married... With Children”. Source: PhotoXpress.

The rate at which Russia is adapting foreign TV series is nothing short of alarming; it sometimes seems as if they are shown in Russia before the originals are even finished. As a result, no more cheap and simple foreign shows remain for Russia to imitate. With only the expensive and difficult series still out there for the taking, Russia may soon be left with nothing at all.

In the Soviet Union, they did not make any TV series in the modern sense of the word. Instead, they had miniseries, and these made up the core of the Russian TV schedule. Today, 80 percent of prime-time hours are given over to TV series, with the rest being filled by news and talk shows.

This percentage is two-and-a-half times higher than in Europe and the U.S., and one-and-a-half times higher than in Latin America and China. Thus, television series have long become the bread and butter of Russian TV channels. As a rule, commercial air-time during popular TV series is far more expensive than at any other time of day, with soap operas generating up to a third of a channel's revenues.

Incidentally, these programs are almost exclusively produced in Russia. Russian viewers have not warmed to foreign TV shows – not since the insanely popular “Santa Barbara” and “Escrava Izaura”(“Slave Izaura”) first arrived on Russian screens. These programs from the United States and Brazil, respectively, provided Russians with their first taste of the soap opera.

The TV-series market in Russia was in turmoil at the turn of the century: as the demand for foreign productions fell steeply, there was not enough Russian “soap” to fill the void. It was simply unrealistic to increase production quickly enough, with a general lack of script writers, directors, lighting and sound technicians, etc.

Joking everywhere about everything works now

The troubled market was rescued by Amedia in 2004, when it premiered a Russian version of the popular American sitcom “The Nanny”(1993–1999) on the Russian channel STS. It turned out that adapting a foreign show for the Russian palate served the double purpose of saving the producer many headaches and quelling viewers' aversion to depictions of life that are “foreign” to Russians.

The story was there, and so were the scripts – they just needed to be tweaked a little. The characters were already well-developed, and absolutely everything could be copied from the original series, down to the setting and the exact positions of characters for each scene. The foreign “donors” were even so nice as to supply information on the positions of lighting.

The effort was minimal, but the results were nothing short of phenomenal. Amedia’s next project, an adaptation of the Columbian TV miniseries “Yo Soy Betty La Fea,” confirmed the model’s success.

Other channels rushed to get a piece of the foreign-TV-adaptation pie. Adaptations started to spring up everywhere, and the success of these “tweaked” versions was so great that Russian producers acquired rights en masse to shoot their own continuations of the much-loved stories.

For example, the final season of the Russian “Nanny” was, from beginning to end, an entirely Russian project. And this has now become the norm. The most recent two seasons of the Russian sitcom “The Voronins”(an adaptation of the “Everybody Loves Raymond”) have been produced independently, and there is no sign of it leaving Russian screens any time soon.

It is not just sitcoms that receive the Russian treatment; melodramas are also frequently remade. This is particularly true of Latin American series, which can often have more than 200 episodes. Russian TV producers quickly got the hang of making adaptations, so much so that viewers often have no idea that their favorite soap is actually a copy of some foreign original.

The incredible demand for adaptations has even produced quite a few surprises: the Russian version of the American series “Married... With Children” is firmly in the top five of sitcoms, with an average share of around 7 percent, according to Gallup. Meanwhile, the original American version could not even make prime-time in Russia: it is currently being aired late at night on Domashny channel (literally, Home channel), with a tiny average share of 0.1 percent.

Happiness was fleeting, however, and problems soon reappeared. After reaching an all-time high of 80 percent, the share of adapted series produced in Russia started to shrink and settled down toward the end of the first decade of 2000 at roughly a third. The decline was not brought about by a drop in demand; rather, Russian producers fell victim to an established pattern of airing programs. In Western countries, TV shows are usually aired once a week, which allows for different programs to be shown every day.

In Russia, however, the norm is to air the same show every weekday until the series is over. While the audience may enjoy this, it is an unequivocal nightmare for producers: they have to come up with 170-200 top-quality episodes per year (rather than just 25), lest the ratings fall and the project be dropped.

This insatiable appetite has brought Russia to a point where the country has just about depleted 40-years’ worth of successful (and adaptable) international TV shows. With the best programs already adapted, producers are furiously digging through the dump to see if they had overlooked any great opportunities.

There are, of course, more recent projects that can be adapted, but they are problematic as well. The first issue is the cost. Rights to sitcoms and melodramas that have long since ended usually cost around 4-5 percent of the budget of each episode; series produced in the 21st century tend to be much more expensive, at as much as 8-9 percent of the budget of an episode.

For example, the production costs of “House MD”reach $12 million per episode, as compared to a maximum budget of $200,000-300,000 per episode for the average Russian TV series. Attempts to avoid acquiring the rights to a foreign show by simply stealing the idea (like the “Dr. Tyrsa”series that imitates “House MD”to a large extent) have fallen flat.

Moreover, there are a number of difficulties involved in remaking newer shows, stemming from the fact that these are generally of a higher quality than their predecessors and often require a more sophisticated audience. Even if producers buy the rights to relatively new hits, they are not guaranteed to be successful. Consider two examples from the recent past: the acquisition of “Prison Break”by Channel One and “How I Met Your Mother” by STS both failed; both adaptations were dropped either in the middle of the second season, or immediately after it.

At the moment, there seems to be no way out of the crisis. However, one promising trend does appear to be taking shape: Russian producers have started to move away from sitcoms and are now trying to expand the range of shows available. Successful adaptations of sci-fi (“Dark Side of the Moon,” based on the British TV drama “Life on Mars”) and thriller series (“Boarding School,” an adaptation of the Spanish “El Internado Laguna Negra”) have shown that there is still hope for the future.