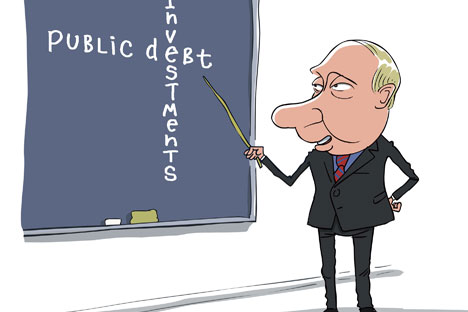 On December 1, 2012, Russia assumed the presidency of the G20, the group of leading world economies that covers 90 percent of world GDP and 80 percent of global trade.

Click to enlarge the image. Drawing by Sergei Yolkin

The Group of 20 was created as an important instrument to co-ordinate international efforts in order to foster economic growth and sustainability, and to manage and respond to crises. Russia is keen to work with our partners to develop new ideas and mechanisms aimed at supporting economic growth and preventing future crises.

The G20 presidency also provides us with an opportunity to address Russia’s long-term national economic goals, consolidate international cutting-edge advice and expertise and share it with other members of the group and the broader international community.

Since the G20’s establishment in the format of the leaders’ meetings in 2008, (with the active support of the Russian and British leadership, incidentally) the participating countries have managed to arrest the economic downturn and tighten supervision over national financial systems.

Russia's year as G-20 chair will not be easy

The future of the world economy in Russia's hands

Together we are advancing a systemic transformation of the international financial and economic architecture in order to provide us with maximum protection from risks, strengthen mutual trust, and give impetus to a sustained and balanced global economic development.

As for the objectives of the Russian G20 presidency, we have decided not to introduce any essentially new items to the agenda but rather to concentrate on the traditional track in support of sustainable, inclusive and balanced growth and job creation around the world.

And we would like to ensure continuity of the dialogue on all the existing issues to facilitate further implementation of the previous commitments.

To meet this strategic goal we are planning to concentrate our common efforts on the following priorities aimed at starting the new global economic growth cycle: boosting growth through quality jobs and investment, through trust and transparency in the markets, and through effective and efficient regulation.

In addition to the traditional G20 agenda, two new financial topics will be added – financing for investment and government borrowing, and public debt sustainability.

We are looking forward to co-ordinating policy measures that could be taken to stimulate the expansion and development of long-term investment sources of growth, as well as discussing the future of sovereign borrowings within the context of national commitments to a set of agreed international rules.

In order to ensure the continuity and implementation of the earlier commitments, we will work with our partners to advance traditional vital issues on the G20 agenda, such as the state of the global economy, implementation of the Framework Agreement for Strong, Sustainable and Balanced Growth, facilitation of job creation, reform of the currency and financial regulation and supervision systems, including the reform of the IMF formula and quotas, as well as maintaining stability in global energy markets, stepping up international development, strengthening multilateral trade and countering corruption.

We will start with updating our commitments under the Framework Agreement for Sustainable Growth. Overall, we are facing a very delicate situation when commitments and real policy actions do not always match each other. We intend to join efforts with our partners in order to encourage leading economies to fulfil their commitments, particularly in terms of implementing the promises on budget deficits and debt coefficients, as agreed at previous summits, including the leaders’ meeting in Toronto in 2010.

We will also push for the implementation of the comprehensive financial regulation reform agenda where G20 has already achieved some impressive results, eg, within the context of the institutionalisation of the Financial Stability Board, Basel III agreement and OTC derivatives.

Russia proposes a result-orientated and pragmatic approach, which implies streamlining the working formats and meetings along the two central tracks, sherpas and finance ministries and the relevant working groups. The presidency’s innovation will be a joint meeting of finance and labour ministers.

Practice shows that global measures are only effective when they are based on the widest possible range of views and take into account the interests of different groups. On the first day of the G20 presidency, Vladimir Putin underlined that Russia was open for dialogue and ready for the broadest possible constructive co-operation on reaching the G20’s objectives.

To ensure the legitimacy, transparency and efficiency of the G20, the Russian presidency plans to hold extensive consultations in the format of the outreach with all interested parties, including non-G20 countries, international organisations, private sector, trade unions, civil society, youth, think-tanks and academic circles, aiming to generate a synergy across sectors to enhance the public benefit of the G20 process.

Our common goal is to address and attempt to resolve the most serious problems facing the global economy, and ensure its sustainable growth for the benefit of ordinary people worldwide. We hope that Russia’s G20 presidency will help to consolidate international efforts and improve our co-ordination in order to achieve this ambitious task. In this respect we strongly count on the active  support of all our partners, including the United Kingdom, within the context of its G8 presidency.