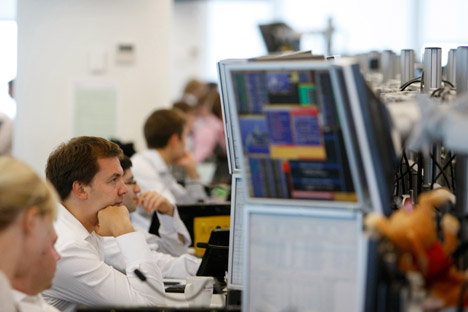 Regardless of the Russian bank's growth in the main indices in 2012, bankers and regulators are anxious. Source: Reuters / Vostock Photo

Although Russian bankers got by without any huge bankruptcies or serious shocks in 2012,bankers and regulators are feeling increasingly anxious.

In 2012, Russian bankers got by without any huge bankruptcies or serious shocks. In fact, most credit organizations are showing growth in the main indices. “It turned out to be a stable year,” said Russia’s Central Bank chairman, Sergei Ignatiev. Still, bankers and regulators are feeling increasingly anxious.

The largest deal on the banking market (and the only privatization one) was the Central Bank’s sale of a 7.6 percent stake in Sberbank for the sum of 160 billion rubles ($5.3 billion). Meanwhile, Sberbank made its presence felt on foreign markets: it acquired Austria’s Volksbank International and won the battle for Turkey’s Denizbank, which cost 3 billion euros ($3.9 billion). No Russian bank has ever spent so much money abroad.

VTB Bank, on the other hand, took a break and examined its acquired assets. In 2013, it plans to terminate the existence of TransCreditBank and show progress in the development of the Bank of Moscow. Even so, VTB did not manage to stay on the sidelines in regards to buying up bank shares. On the instructions of Vladimir Putin, a buy-back was announced by state-owned VTB for investors in its “people’s IPO.” Some 74,000 people took part in this deal, with claims totaling 11.4 billion rubles ($380 million).

VTB also partially funded Otkritie Financial Corporation’s buyout of Nomos Bank. That, in essence, was the end of the public story of Nomos, which had gone on for a little over a year. This merger should, according to those behind the deal, lead to the creation of Russia’s second biggest private bank.

While the owners of Nomos were pleased with the appraisal, the owners of PromSvyasBank found the suggested price during the IPO not to their liking; the latter subsequently canceled their investment. PromSvyasBank owners have not given up hope, however, and they plan in time to make a third attempt to put their stocks on the market.

Dmitry Orlov, founder of Bank Vozrozhdenie, was also unable to agree on a sale; he traded his post as chairman of the Management Board for the Board of Directors. Vladimir Kogan’s setup was one of the bidders for the bank. The return of Anatoly Motylev and Boris Khait to the banking business was more successful: together with partners, they bought Rossiyskiy Kredit Bank from Georgian-born businessman Boris Ivanishvili. Other foreigners also left the business. Belgium’s KVS Group decided to sell Absolut Bank for 3 billion euros to the non-governmental pension fund Blagosostoyanie.

In late December, Alexander Turbanov, general director of Russia’s ASV deposit-insurance agency, ceded his post to Yuri Isaev. In the coming year, Isaev will have to introduce higher state guarantees, since a fundamental political decision about this has already been made. Currently under discussion are the size of the state guarantee ($35,000 or $50,000) and the possibility of raising the size of deductions for banks offering high rates on deposits.

Reforms lie ahead not only at ASV but at the Central Bank of Russia, as well. The prime minister has sent the president a proposal for approval to create a mega-regulator for financial markets on the basis of the Central Bank. This means that, within two years, the Federal Financial Markets Service should be integrated into its structure. However, most of this work will most likely fall to the new head of the Central Bank, since, in 2013, Sergei Ignatiev’s third and last possible term in this post will expire. No official announcements have been made yet as to who will replace Ignatiev.

In 2012, the Central Bank toughened requirements for bank capital and reserves. It also acknowledged that it was disturbed by the rapid growth of tax-free credits – its rates have exceeded 60 percent a year. In the regulator’s opinion, it is there that large risks accrue. The Central Bank’s increased attention forced Maxim Nogotkov’s Svayznoi Bank, which has been betting on credit cards, to stop issuing them just prior to the busy holiday season. Other players were also scrutinized.

Nevertheless, by the end of 2012, the banks were expecting over 1 trillion rubles ($33 billion) in combined net profits – an absolute record in Russian history. Most indices (assets, capital, deposits, and credits) are showing growth of around 20 percent.