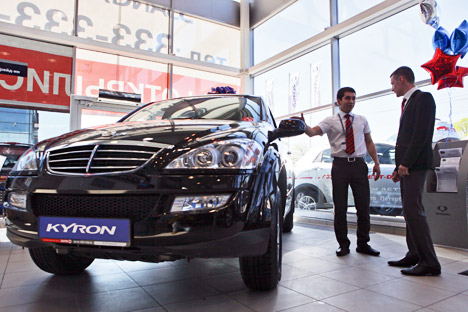 2012 broke Russia’s car sales record for 2008, which was the most profitable for all automakers. Source: ITAR-TASS

Last year was one of the most significant in the whole history of the Russian car market. In the first place, 2012 broke Russia’s car sales record for 2008, which was the most profitable for all automakers. In the second place, 2012 represented a new benchmark for the domestic car market.

Statistics show that sales of new automobiles in 2012 totaled 2.97 million cars, which is 6 percent more than in 2011. The rates of market growth in 2012 were not as high as in 2010 or 2011, however. The main reason for the decrease was the exhaustion of the “low-base” effect: consumers had satisfied demand that had been deferred following the global financial crisis, and now the market is developing progressively.

Another reason for the decrease in growth rates was the 1-2 percent increase in interest rates on car loans at universal banks. However, this is not a very significant factor since special offers from captive banks attract clients who prefer rather than reject captive programs to the standard loan programs at universal banks.

Today there is a lot of talk about the adverse economic situation in Europe and about the possibility of these European trends affecting the Russian car market in the near future. This should not be overly dramatized. The European car market, primarily because it is mature, differs fundamentally from the Russian car market. The volumes of car sales in the major European markets – Germany, France, Italy and Spain – are decreasing, but this is fairly easy to explain.

Thus, the European car owner can easily postpone the purchase of a new car if he or she does not consider this investment a top priority in conditions of financial instability. He or she will simply drive the four-year-old car for another year. Secondly, there are far more car owners in Europe than in Russia. In Germany, there are 550 cars for every 1,000 people; in other words, most people in Germany own cars. This is not the case in Russia.

The situation on the Russian car market is completely different. The country’s market is young and developing. Most people in Russia do not own a car. In Russia, there are 300 cars for every 1,000 people – hence the potential for sales growth.

Moreover, of the cars currently owned, 50 percent are more than ten years old: they are physically worn out, and many of them will have to be replaced in the near future. Therefore, to say that Russia’s market is saturated and already like Europe’s is premature. Russian dealers and manufacturers understand this. They have invested not only in the opening of new assembly lines but also in various financial plans for buying cars.

At a recent conference, it seemed as though both automakers and auto dealers were forecasting very smooth growth for the Russian car market in 2013 and the mid-term. However, a few participants in the conference forecast a slight dip in sales (down to 2.8 million cars) as compared with 2012.

Rolf takes a more optimistic view of the market and does not see the prerequisites for a decrease in volumes of car sales in 2013 as compared with 2012; nor does it see grounds for the sort of rapid growth that existed before the crisis.

At Rolf, two possible scenarios are hypothesized as the situation develops: one pessimistic and the other optimistic.

Rolf bases its estimates on sales for 2012, which should have totaled 2.97 million cars. According to pessimistic forecasts, sales for 2013 will total 3.01 million cars, which is only 1.5 percent more than in 2012. What does this mean? It means that Russia’s car market will still grow, if only by a little bit. There are several reasons behind this. In the first place, the average age of 50 percent of all Russian-owned cars is over ten years, which means that they will have to be replaced.

Secondly, the development of Russia’s budget-foreign-car segment (Renault Logan, Sander, Duster, Hyundai Solaris, Kia Rio, and VW Polo Sedan)will facilitate car-park renewal. It is these models costing 340,000 rubles and up ($11,000 and up) that the owners of old foreign makes will choose as replacements – these and Russian-made cars.

Thirdly, the stability of the premium segment is less vulnerable to economic fluctuations on the market than other segments. Moreover, the active expansion of brands in the premium segment, with the introduction of “younger” classes, lowers their starting price and allows them to compete successfully with top models from mass brands.

According to the optimistic scenario, sales of new cars in Russia in 2013 will total 3.19 million cars, which is 7.4 percent more than in 2012. Not counting the three factors listed above, the optimistic scenario anticipates a stabilization of the world economic situation, which will calm Russian consumers, give them more financial confidence and prompt them not to put off the acquisition or replacement of a car until later.

Tatiana Lukovetskaya is the CEO of Rolf Retail. The article is abridged and first published in Russian in RBC Daily.